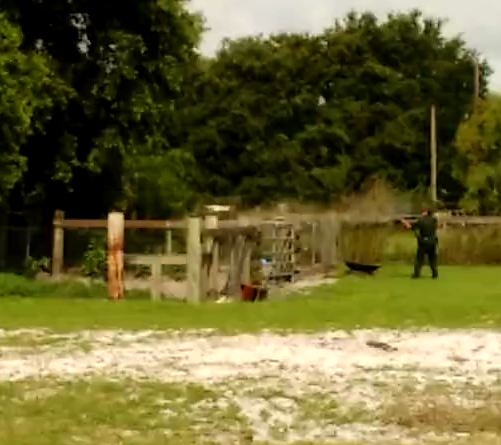 Bartow,  Florida –  Around 9:40 a.m. on Saturday, June 11th, a PCSO Deputy Sheriff on patrol in the Southeast District saw a black bear walking south across S.R. 60 in Alturas onto 80 Foot Road, towards Wells Road. The deputy called the Emergency Communications Center and requested the Florida Fish and Wildlife Conservation Commission (FWC) be contacted to respond to the area, which is rural but residential. The deputy followed the bear to monitor its activities and ensure it did not endanger any humans while waiting for FWC to respond.

The deputy witnessed the 6-food-tall 300 lb. bear climb the fence and enter onto the property located at 5615 Wells Road, where there is a pig pen. The bear then began attacking the pig (see video). The deputy discharged his agency-issued shotgun equipped with one-ounce slugs at the bear, and a round struck the bear in its lower back. The bear then charged at the deputy in an attempt to attack him (see video). In fear for his life, the deputy discharged two more rounds, killing the bear and eliminating the dangerous threat to humans and animals.

The pig survived the attack and did not require any treatment. No humans were injured during this incident. FWC responded and collected the bear. They will do testing to determine whether or not it is equipped with a tracking device.

Please refer any questions about the bear to the FWC. Per the FWC – for more information about Florida’s growing bear population, please go to www.myfwc.com/bear.

“There is no such thing as a routine call in law enforcement. I’m proud of this deputy, who saw a potential threat by a wild animal, immediately took action, and placed himself in a position not only to protect human life, but also someone’s livestock. Because he was in the right place at the right time, the bear did not kill or maim anyone or anything.”Sheriff Grady Judd