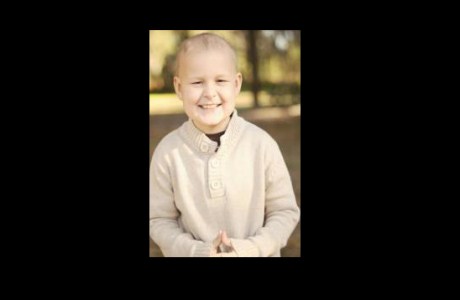 By Carl Fish
Lake Wales, Florida – Blake Appleton, God’s Miracle. I do not say these words lightly or strictly for affect. I say these words because I believe them to be true. I believe all things are possible through Jesus and that miracles happen only because of God. I also believe that God gives each of us the gifts and abilities to be part of those miracles. Like all of us, Blake probably never knew the plans God had for his life.
Blake Appleton, a little boy from Lake Wales, was stricken with a horrible disease. Blake Appleton was diagnosed with brain cancer in January of 2008. He was given a 10% chance of survival with a 60% chance of recurrence. After extensive chemo at Shands Hospital, Blake beat the odds and the cancer went into remission. A checkup in December 2009 showed the cancer had returned. Blake was valiant in his fight with cancer. He attended 30 sessions of radiation therapy and 40 sessions of chemo therapy. Even with his treatments, Blake still kept his smile. During all of this God’s miracle was working. Blake was changing hearts, bringing the best out of people, he was inspiring.

In December 2010 after suffering more than long enough, little Blake, decided on his own that he wasn’t going to take the sessions of chemo and radiation therapy. He knew it was making him sick to the point that he could no longer bear it. A seed that God planted in a young girl, named Emma Hill, who Blake had personally touched started to grow. Emma, a 13 year old girl was determined to contact a hero of Blake’s. That hero was Tim Tebow. Tim Tebow was the most prestigious sports athlete in the world at that moment. The seed that God planted, Blake’s personality, and courage combinded, produced a phone call from Tebow to Blake. It was huge for the young man and huge for a community to know that someone could care so much about another person. Tebow would go on to mention Blake’s name on national television and they would personally meet. Many stories would be written. This story would affect people all over the United States. I personally was contacted by people in Denver Colorado expressing support for Blakey and wanting to help bring him to a Broncos game. If generous donors didn’t sponsor the trip for Blake, then Tim Tebow’s W15H Foundation was prepared to bring him to the playoff game with the Steelers.
Many other trips soon followed. He was a court side guest at an Orlando Magic game as well as a New York Knicks Game. He also visited with with celebrities and the local sheriff. Even before the Tim Tebow story Blake had a love for fire trucks and fire fighters. He was honored many times by firefighters locally and out of state. Blake would take part in a motorcycle event in his honor, an award in his name would be given away at his school and many other events would be touched by his presence. Through all of this, he inspired those that inspire so many others. His classmates and teachers at school were the greatest witnesses of his kindness and courage. He will have a lasting effect on his generation and the generations to come.
Blake Appleton died on Tuesday May 15, 2012. Rain would pour down on the community of Lake Wales, I wonder, is that heaven crying for joy or sorrow? To me, he is the miracle that brings inspiration, hope, and community. In the face of death, he inspired people with his courage. He brought hope that even if your days seem dark, you can make them brighter with a smile. He brought thousands together to realize something or someone may be more important than themselves. I believe that God’s miracle, Blake Appleton, has created the seed for thousands of miracles. I hope that you will not waste a moment of your life not following Blake’s example, and let God work his miracles through you.