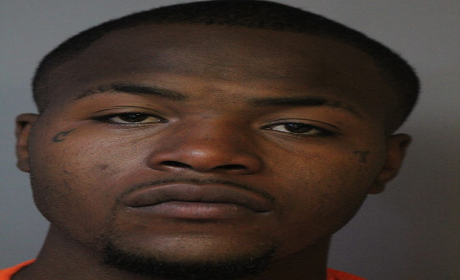 On March 16, 2016 at approximately 6:30 p.m., Officer Aubrey Davis of Lake Wales Police Department Crime Suppression Unit was patrolling the Publix parking lot on US 27 North in Lake Wales in an unmarked vehicle.  The Unit was attempting to locate a stolen vehicle from Lakeland on March 9th believed to be involved in a string of thefts, burglaries and robberies which spanned Lakeland, Hillsborough County, Haines City, Lake Wales, Winter Haven, Bradenton, Clearwater and Auburndale.

Officer Davis noticed a vehicle matching this description driving through the Publix parking lot.  He was able to obtain a tag number which match the tag given out by Winter Haven Police Department.  Lake Wales Police Officers and Polk County Deputies responded to the area.  The vehicle was running on a flat tire and the driver pulled into the Green Gables parking lot which is located south of the Publix on US 27 North.

The suspect drove behind The Sizzlin’ Grill and parked.  Officers and Deputies converged on this parking lot and took five suspects into custody and recovered the stolen vehicle.  Of the five subjects, only one was an adult, Chrishawn Laboris Jones, 19 years of age, form Eagle Lake.  Jones is being charged with Grand Theft of a Motor Vehicle and Violation of Probation.  Jones is on probation for Giving False Information to a Recycler.  Two of the suspects were 17 years of age and two were 16 years of age.  Shelton Jerome McNeal, age 17 of Lakeland, was in possession of the keys when arrested.  He is being charged with Grand Theft of a Motor Vehicle.  The other three juveniles are being charge with Trespass of a Conveyance and are from Lakeland.

Winter Haven, Florida – Winter Haven Police are investigating a purse snatching that left a 71 year-old woman with a broken wrist. The incident is one of a rash of occurrences that started with a vehicle stolen from Lakeland on March 9 and has been linked to six other cases.

On 3-15-16 at approximately 7:00 p.m., the 71 year-old victim parked in the east side of the Publix parking lot, located at 1350 6th St. NW in Winter Haven.  The victim was headed to St Joseph’s Catholic Church which is directly across the street from the parking lot.
As she got out of her vehicle, a 2001 Gold Jeep Grand Cherokee (FL tag 379MSR) approached her and the rear passenger opened the door. The passenger, described as a black male, approximately 30 years old, clean-cut look with short hair approached the victim and asked for directions to a church.  The suspect was holding a paper, making it appear he had the name of the church on the paper. As the victim stepped closer to converse with the suspect in order to help him with directions, the suspect grabbed her purse straps and jumped back into the vehicle as it began to speed away.
The victim had the purse around her left shoulder and the motion of the vehicle caused her to fall to the ground. The vehicle sped through the parking lot and head westbound towards Lake Howard down Ave. L NW. Witnesses who heard the squealing tires looked just as the victim was falling. The witness was able to see that there were four black males inside of the vehicle. The witness immediately called law enforcement while running to assist the victim.
The Jeep Grand Cherokee has a black roof rack and a right-side (passenger) brake light that is out. Additionally, the top window brake light does not work either.
“It takes an absolute cowardly thug to prey upon a senior adult female and use a ruse about directions to a church in order to victimize her,” said Chief Charlie Bird. “It’s obvious they stalked her and when she was at her most vulnerable, they sprang into action by taking advantage of her kindness.”  Everyone should be extra diligent in surveying their surroundings before exiting their vehicle and if there is ever a doubt, stay inside and lock the doors.
The victim was taken to the Winter Haven Hospital Emergency Room where she was treated for a broken wrist along with multiple scrapes and contusions.
Two of the four suspects were described by the victim and witness as black males, one (driver) with a short afro-style haircut, possibly with a mustache/goatee and not wearing a shirt. The second suspect (passenger who exited vehicle) is “clean cut” with a short/tight haircut and approximately 30 years old.
Anyone with information on this case is asked to call Heartland Crime Stoppers at 1-800-226-TIPS (8477). Callers can remain anonymous and could be eligible for the CASH reward of up to $3,000.

Breakdown of suspected cases connected to this stolen vehicle:
(Please note the average age of the victims are older than 65 years of age.)

Friday, March 11th 2016 (2:30 p.m.)
Seffner (Hillsborough County)/Publix Parking Lot 11782 Dr. King Blvd E
Hillsborough County Sheriff’s Office Case  2016-169495
The suspect briefly stopped behind the victim’s vehicle and exited the driver’s seat, removing the victim’s purse out of her shopping cart.  He then entered back in the Jeep on the passenger side as the passenger moved to the driver’s seat.

Saturday, March 12th 2016 (4:15 p.m.)
Haines City/Walmart Parking Lot 36205 Highway 27
Haines City Police Department Case 2016-878
The victim was in the Walmart parking lot when the suspect vehicle drove up and the passenger exited and approached the victim asking directions.  The suspect then grabbed the victim’s purse from the cart and ran back to the vehicle.

Sunday, March 13th 2016 (4:49 p.m.)
Lake Wales/Eagle Ridge Mall, Dillard’s Parking Lot 100 Eagle Ridge Drive
Lake Wales Police Department Case 16-660
The suspect approached the victim asking her “Is this the Eagle Ridge Mall” at which she replied yes, he then snatched her purse from her shoulder causing the chain to break and fled on foot towards a sport utility vehicle.

Sunday, March 13th 2016 (6:43 p.m.)
Winter Haven/Walmart Parking Lot 355 Cypress Gardens Boulevard SE
Winter Haven Police Department Case 16-1646
The victim was loading her groceries in her vehicle when the black male suspect exited the passenger side, grabbed her purse out of the cart and jumped back into the Jeep.

Monday, March 14th 2016 (12:00 noon)
Bradenton (Manatee County)/Publix Parking Lot 4651 Cortez Road W
Bradenton Police Department Case 16-002149
The victim was leaning inside her trunk as she packed her groceries away, she felt a tug on her purse and when she turned around she saw the suspect trying to snatch her purse.  The suspect grabbed her upper left arm and during the struggle the victim fell to the ground.  The suspect ran back to the waiting vehicle and entered the passenger seat.

Monday, March 14th 2016 (1:30 p.m.)
Clearwater (Pinellas County)/WalMart Parking Lot 23106 US Hwy 19 N
Clearwater Police Department Case 16-36599
The suspects are seen entering the victim’s vehicle and taking a purse from inside. They are seen on video in a gold or tan Jeep Grand Cherokee

Tuesday, March 15th 2016 (6:50 p.m.)
Winter Haven/Publix Parking Lot 1384 6th Street NW
Winter Haven Police Case 16-1698
The female victim was approached by the suspect who asked her directions to a Baptist Church.  When the victim stepped closer to speak with the suspect he grabbed the victim’s purse strap which was still wrapped around the victims arm. The victim held on to her purse and a struggle took place that resulted in the victim falling to the ground and breaking her wrist