Betty Perdue may be 90 years old, but she’s been partying at the annual Lake Wales Mardi Gras since it started 36 years ago. Why does she and her friends keep coming back time and again? As she said, “Because we haven’t died yet.”

Perdue remembered when the annual Mardi Gras event started in 1984 in memory of Vinton Davis, a local entrepreneur and lover of all things New Orleans. When he passed away, his family wanted to host a New Orleans-style jazz funeral procession. They did the next best thing and hosted a Mardi Gras celebration. The city has been continuing the annual tradition ever since.

Perdue remembered when the event was still in its infancy. When it first started, there was street dancing and a ball hosted at the Dixie Walesbilt Hotel. Even though the event has changed, her love for it remains the same.

She and her friends with the Pegasus Krewe participate every year in the parade. This year, much to their krewe’s names, they decorated their float with plenty of feathers. Perdue loves Mardi Gras, and she hopes to continue living so that she can continue celebrating. 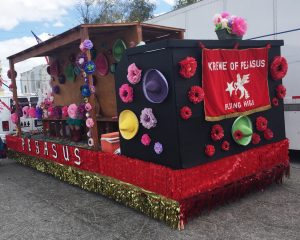 “We love the fun and street dancing,” she said. “We still love to dance, we love to have fun. We live here for the day. We will be here next year.”

Perdue and her krewe were one of many that participated within the Mardi Gras parade, the main highlight of the annual Lake Wales Mardi Gras celebration as hosted along the shores of Lake Wailes.

This year’s event consisted of several floats and other units as created by krewes and local organizations such as the Polk County Sheriff’s Office, Lake Wales Care Center, and, of course, The Daily Ridge. 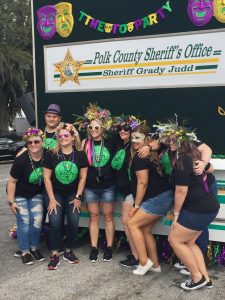 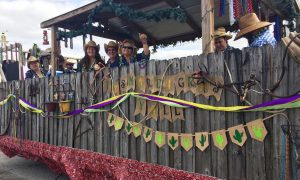 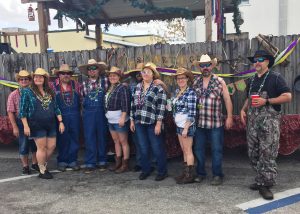 Each float had a uniquely festive style, ranging from 1920s flappers at a speakeasy to 60s hippies and Western cowboys. The remainder of the event was hosted at Lake Wailes Park with food vendors, arts and crafts, and live music. 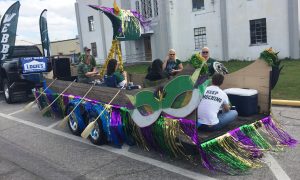 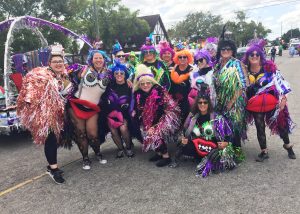 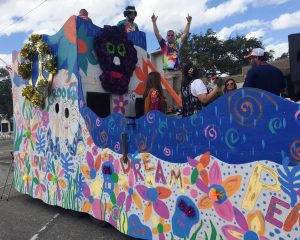 Krewe Zazu, one of the founding krewes for the event, participated with their members dancing to the song “Don’t Believe Me, Just Watch” while dressed in colorful costumes with fake eyes and lips in very interesting places.

The krewe consists of second and third generation partygoers. They love participating in the parade, and consider it the highlight of the event.

“It wouldn’t be Mardi Gras without Zazu,” one member said.

Another krewe, Krew Kaos, while not participating in the event for as long, has been around for a long time, having attended for the past 12 years. This year, their floated was “very groovy” with its members dressed as hippies.

“Everything is fun,” said one krewe member, Marilyn Helm. “From creating the float, to coming out and throwing the beads at the kids and everyone in between. We want a pumped up crowd with people involved and to see the people come out and have a good time.” 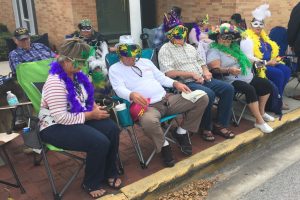 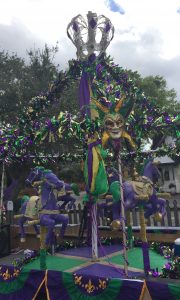