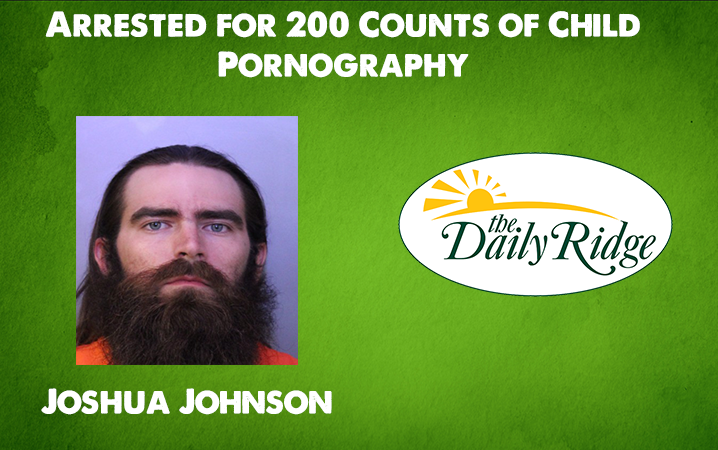 On February 13, 2020, PCSO Computer Crimes detectives obtained a warrant for and arrested 27-year-old Joshua Johnson of Davenport charging him with 200 counts possession of child pornography (enhanced) (F-2). The charges are enhanced because the images/videos met one of the following criteria, per FSS 775.0847:

(a) The offender possesses 10 or more images of any form of child pornography regardless of content; and

(b) The content of at least one image contains one or more of the following:

Upon Johnson’s arrest, he told deputies he’s been viewing child pornography from a young age, ever since he received his first computer, and that he is “addicted” to it.

“Those who upload and share child pornography are victimizing children over and over again. It is especially concerning when we locate a suspect with this many images, most of which depict very small children being sexually abused. At this time we don’t believe Johnson physically abused a child, but the investigation into that is ongoing.” – Grady Judd, Sheriff

The following is an excerpt from his affidavit, and it is self-explanatory (it is also graphic):

There was a total of six hundred ninety-six (696) images/videos uploaded/reported, of which your Affiant was able to review. Three hundred fifty-seven (357) of those files depict Black, White and Asian pre-pubescent males and females ranging from approximately 3-13 years of age, who are exposing their genitals in a lewd manner, and/or engaged in sexual conduct with other juveniles and/or adult. These files are child pornography as defined by F.S.S. §827.071. (It should be noted there are approximately twenty (20) duplicate images/videos within this total count)

The following information was provided for the second CyberTipline report 62362547 (Google):

There was a total of two (2) images uploaded/reported, of which I was able to review. Both images depict white pre-pubescent females ranging from approximately 2-7 years of age exposing their genitals in a lewd manner, and/or engaged in sexual conduct with an adult. These files are child pornography as defined by F.S.S. §827.071.

From the FB post and comments believed to belong to Joshua Johnson, it was learned the suspect was incarcerated during 2016.

Utilizing the provided Department of Corrections number located on the Facebook page (J49917) your Affiant was able to locate Joshua C Johnson, 04/04/1992. Mr. Johnson was released on 08/01/2017 after serving his sentence for Robbery.

The listed “residence upon release” was:

Your Affiant conducted a check via DAVID, for the listed name of “Joshua Johnson” with the date of birth found from the DOC information. The following person was located:

A check of the address history showed a previous address change on 04/24/2017 for the residence 2006 Hemingway Circle, Haines City. Your Affiant noted this address to be the same listed address in the DOC “Residence upon release”.

Your Affiant further noted the CyberTipline reports showed the same phone number 1-863-399-5701 was used during creation for both user accounts.

On 02/07/2020, your Affiant was conducting surveillance at the suspect residence. Upon arrival, your Affiant noted the address was for the “Theme World RV Resort”. There are currently 282 lots located within this resort. Your Affiant utilized the DAVID database (Driver And Vehicle Information Database), and found there was a single camper which was registered to the suspect. Your Affiant surveyed the entire RV Resort and located only 1 camper within the park which matched the make and model (Rockwood by Forest River). Your Affiant further found there was no tag attached to the camper, making it unavailable to identify the registered owner, however it was found parked around marked Lot #51.

Your Affiant responded to the front office of the RV Resort where he made contact with the office manager. Your Affiant identified himself as Law Enforcement with Polk County Sheriff’s Office and also provided his agency issued badge for identification and requested to know who was currently in lot #51. The office manager advised they wouldn’t be able to provide the information requested without more specifics. Your Affiant provided the last name of “Johnson”, and the park manager confirmed suspect Johnson had moved into lot #51 approximately 6 months ago which correlates with suspect Johnson’s address change.

Joshua Johnson has actively been utilizing his cell phone device, registered with T-Mobile to obtain/save images/videos of child pornography.

Joshua Johnson’s identity has been confirmed and he is currently still utilizing the same phone number linked to the child pornography Yahoo/Google accounts. Johnson is being charged with 200 counts of enhanced possession of child pornography based on the approximately 330 counts observed by your Affiant.”

Johnson’s criminal history includes 4 previous felonies, including armed robbery and VOP in Jacksonville. He was in state prison from March 2016 until August 2017. He is married and has a child. He will have a first appearance hearing on February 14, 2020.