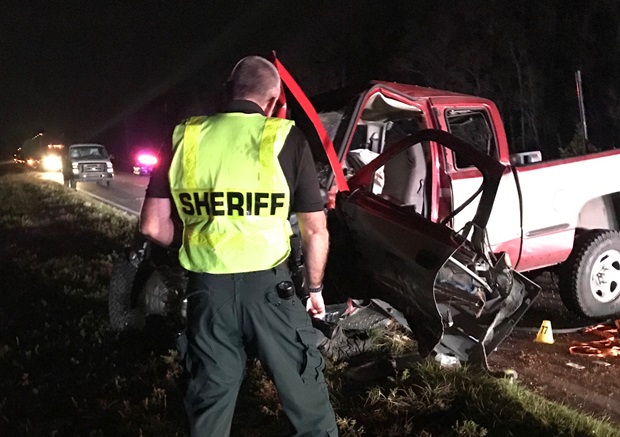 Three vehicles were involved in a crash in Polk County early Tuesday evening, resulting in the death of 49-year-old Harold Toney of Polk City, and injuries to two others.

Deputies responded to Deen Still Road, about a quarter-mile west of Brown Shinn Road in the Polk City area, at around 6:30 p.m., Tuesday, February 4, 2020, to find two pickup trucks and a semi-tractor with a flatbed trailer.

Toney, who had extensive body trauma, was entrapped in a red/gray 1998 Dodge 1500 Ram pickup truck. After being freed from the wreckage, Toney was transported to Lakeland Regional Health Medical Center by Polk Fire Rescue, but succumbed to his injuries.

Also transported for treatment were 34-year-old Justin Bowen of Eagle Lake, the driver of a black 2011 Ford F-150 pickup, and his two passengers: 22-year-old Kobe Bell and 4-month-old Mason Bowen, both of Lake Wales. It was determined that the child suffered no injuries, while the other two were listed in stable condition.

61-year-old Eugene Henderson of Dundee was the driver of a white 2013 Peterbilt tractor with flatbed trailer. He was not injured in the crash.

According to the preliminary investigation, the semi-truck and Ford were both traveling eastbound on Deen Still Road, and the Dodge was travelling westbound. For reasons undetermined at this time, the Dodge crossed the center line of the road and sideswiped the semi-truck, then struck the driver’s side of the Ford.

The Ford overturned and came to a rest in a ditch on the south side of the road, and the Dodge came to a stop facing south in the eastbound lane.

All involved in the crash were determined to have been properly secured in their seats.

Deen Still Road was closed for approximately five hours, and the crash remains under investigation.