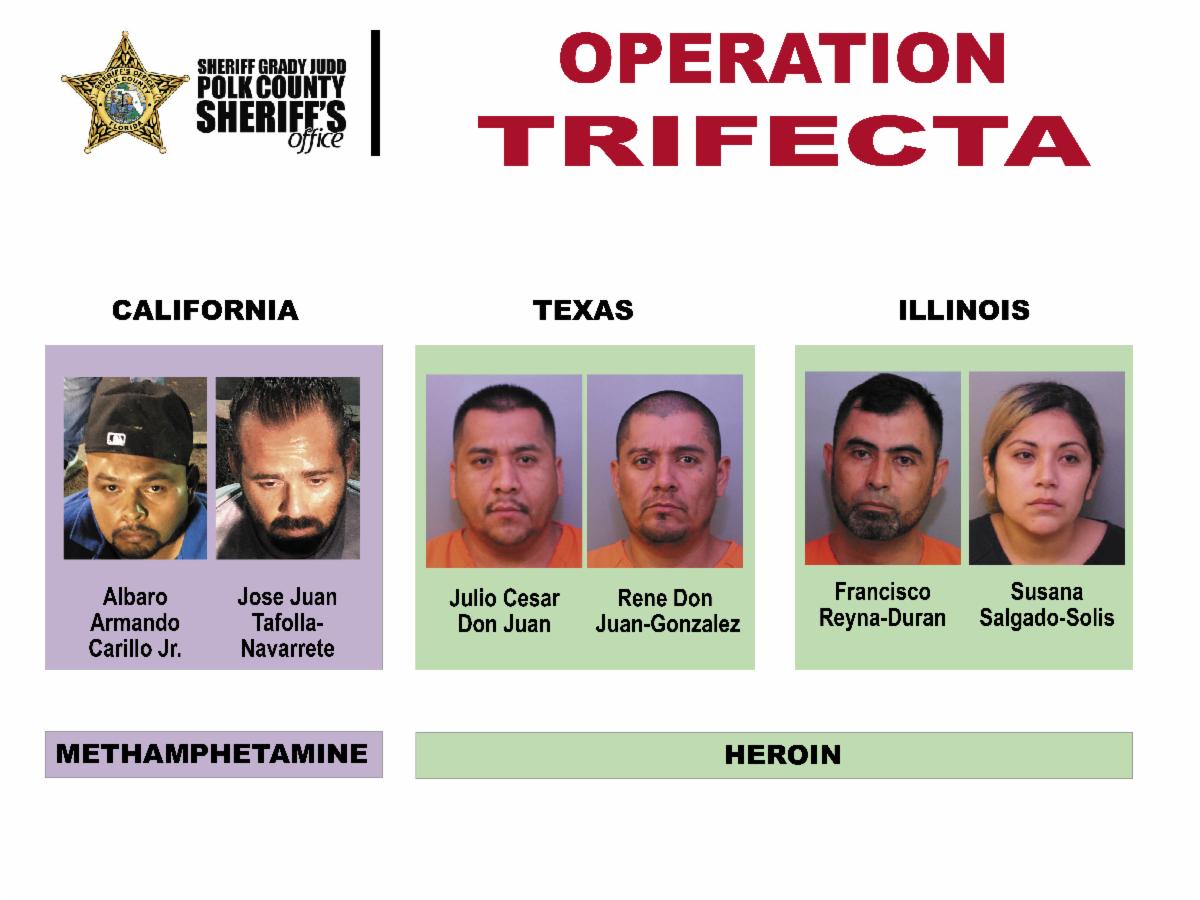 “These are extraordinarily dangerous illegal drugs, and, as we have seen, the Mexican drug trade is extremely violent and deadly. Our detectives did an outstanding job of removing these drugs—and dealers—from causing future misery, violence, and death. Without question, lives have been saved as a result of this investigation.” —Grady Judd, Sheriff

On August 1, 2019, PCSO detectives worked with the Inland Crackdown Allied Taskforce in Bloomington, California regarding a face-to-face narcotics transaction with suspects developed by PCSO detectives. An undercover PCSO detective agreed to purchase 100 pounds of Methamphetamine from the California based supplier of Mexican Methamphetamine. Detectives met 34-year-old Albaro Armando Carillo Jr. (illegally in the United States from Mexico) of Compton, California at a location in Bloomington, California. With Carillo was 30-year-old Jose Juan Tafolla-Navarrete (illegally in the United States from Mexico) of Compton, California. They produced 100 pounds of Methamphetamine from boxes and bags from their vehicle and placed them into the back seat of the undercover vehicle—there were three boxes and two large 30 gallon bags that contained 100 plastic containers. Each of the plastic containers held one (1) pound of methamphetamine. The undercover detective was able to confirm one of the boxes contained multiple containers of methamphetamine.

Both men were taken into custody and arrested for Trafficking in methamphetamine; they were booked into the San Bernardino County Jail.

Not all methamphetamine transactions and seizures are described in this news release. A combined 139 pounds of Methamphetamine was seized during the overall investigation. The street value of the Methamphetamine is approximately $4.6 million.

The methamphetamine trafficking investigation led to information about other traffickers of illegal narcotics.

On November 26, 2019, a Polk County Sheriff’s Office undercover detective made arrangements to heroin delivered to Polk County. The source of supply was a mutli-kilogram distributor based out of Chicago (later identified as 38-year-old Francisco Reyna-Duran, illegally in the United States from Mexico). The arrangement was that the source of heroin supply would depart from Chicago and arrive in Polk County on November 27, 2019.

Reyna-Duran flew to Florida and arranged to meet with an undercover deputy in Lakeland. The multi-kilogram shipment of heroin was further discussed and arrangements were made to deliver the drugs. The heroin was driven to Florida by an accomplice.

A total of approximately 3.25 kilos of suspected pure heroin were recovered during the arrest. During an interview, Salgado-Solis stated she had two children (5 and 6 years old) who she left behind at a hotel while she and Reyna-Duran delivered the heroin. Detectives responded to the hotel and recovered the children who were with an unknown Hispanic male. The unknown Hispanic was identified by his Illinois driver’s license as 41-year-old Armando Fernandez. Fernandez was uncooperative. DCF responded and took custody of the children. During the interaction with detectives, Fernandez was belligerent and called 9-1-1 stating one of the children was having a medical episode and needed an ambulance immediately. Both children were in good health. Fernandez was arrested for Misuse of 9-1-1.

On November 26, 2019, a PCSO undercover detective arranged the purchase of a kilo of heroin from a source in Houston, Texas. Arrangements were made to have 34-year-old Julio Cesar Don Juan deliver the heroin to Polk County. Don Juan agreed and indicated he would arrive on November 27, 2019.

In the early morning hours of November 28, 2019, Don Juan called and stated he was in Lakeland and ready to meet. Detectives arranged to meet Don Juan at a location in unincorporated Polk County. Don Juan and another man (later determined to be his brother, 32-year-old Rene Don Juan-Gonzalez) arrived at the meeting location in a white Range Rover SUV. While the undercover detective met with Don Juan, Don Juan’s brother exited the Range Rover and placed one kilogram of heroin in the undercover vehicle. Both were then taken into custody– Juan-Gonzalez without incident and Don Juan after a brief foot pursuit.

The Don Juan brothers were both arrested and charged with Trafficking in Heroin and booked into the Polk County Jail.

The recovered heroin weighed approximately 1.25 kilograms. The Range Rover was determined to meet the criteria for forfeiture and it was seized. Julio Don Juan was found to be in possession of approximately $1,800 in US currency which was also processed for forfeiture.

Not all heroin transactions and seizures are described in this news release. A total of 5 ½ kilos of heroin were seized during the investigation. The street value of the Heroin is $4.9 million. Approximately 165,000 “hits” were taken off the street.

Those arrested during this completed investigation are below. No other arrests are expected.

Charges: Trafficking in Heroin over 28 grams, Conspiracy to Traffic in Heroin of 28 grams (2 counts), Possession of Drug Paraphernalia

Resisting Or Obstructing An Officer

Charges: Trafficking in Heroin over 28 grams

Armando Fernandez (with children at hotel)

Agg Unlawful Use of Weapon