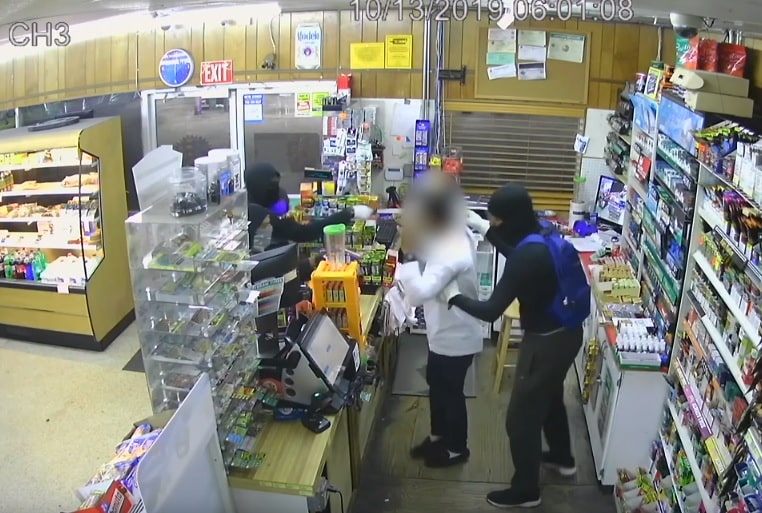 The PCSO Robbery Unit is investigating two armed business robberies that occurred in Winter Haven during the early morning hours, committed by the same three suspects.

Around 6:00 a.m. on Sunday, October 13, 2019, an armed robbery occurred at the Citgo gas station located at 2415 Avenue G NW in the Inwood area of Winter Haven in unincorporated Polk County. The three suspects went into the store and robbed the clerk, then fled in an unknown direction. All three had their faces covered and were wearing gloves. Two of the three were armed.

A second armed robbery occurred at 6:50 a.m. at the Marathon gas station located at 2600 Havendale Blvd in the Auburndale/Winter Haven area of unincorporated Polk County. A review of video surveillance shows the same three suspects.

The suspects are described as:

A black male, approximately 5’6″ to 5’8″ tall, wearing a dark-colored hoodie, blue shorts, black and white nylon leggings, and Converse sneakers. He was armed with a chrome handgun, and carrying a multi-colored backpack.

A black male, approximately 5’8″ to 5’10” tall, wearing white gloves and carrying a blue backpack. He was not armed.

An unknown race male, approximately 5’6″ to 5’8″ all, wearing black pants, a blue hoodie, and wearing a blue latex glove on his left hand and a white glove on his right hand. He was armed with a black pistol.

If anyone has information about either of these robberies or recognizes these suspects, they are urged to contact Detective Escheu at 863-298-6200.

You will always remain anonymous and you may be eligible for a cash reward if your information leads to an arrest.

Your information will be forwarded to law enforcement for follow up. If an arrest is made based on your tip, you are eligible for a cash reward of up to $3,000.