When filmmaker Calvin Prude was looking for a soundtrack for his upcoming movie, “Freeway Boys: The Untold Story”—a documentary about one of the biggest cocaine operations in U.S. history run by Los Angeles drug kingpin, Freeway Ricky Ross—he wanted a heavy, gritty beat that would accentuate the heavy, gritty underground subject matter.

While looking for potential composers, he came across the Instagram of Babson Park producer, Mike Beasley. Intrigued by Mike’s work and industry connections, he reached out to the producer who sent him a sample track. 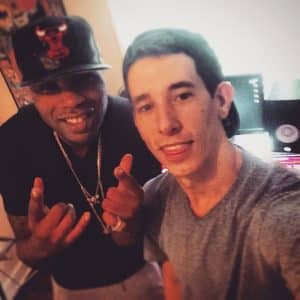 What Calvin heard blew him away and immediately inspired him to partner with Mike. In fact, he was so enamored by Mike’s beats that he removed all of the music from his documentary so that Mike could replace it all with his own music, Mike said.

“I was looking for an instrumental [score] to enhance the human voice, and Mike brought that to the table,” Calvin said. “A lot of people do music, but they do not do music composition or scores. This dude does both. I was blown away…It blew everybody away. Everybody that heard the track was like, ‘That is it, Calvin!’ It was so cinematic…He is so passionate about what he does.”

More so than his cinematic-quality soundtrack beats, Calvin was especially inspired by Mike’s passion for his craft. Most composers produce music, but very few play live instruments. Mike plays his own music, which shows that he has a real passion for his craft, Calvin said. “To find someone that energetic about the things that they do, you do not find that very often,” he said. “I see this person doing really great things in the future. I would love to work with him again. I turned him on to a few of my friends, and they were blown away by his work. They were blown away, too. He is a very passionate youngster.”

Mike has produced musical beats for various projects such as movies, television, and music videos. To him, raw video footage with no other sound or music is like a blank canvas he can use to express his creativity. Born in Babson Park, Mike was raised in a family of musicians. At age five, he started playing drums. He could barely reach the pedals sitting down, requiring him to stand up to play. Often he would even play a few songs for his father’s band during performances. 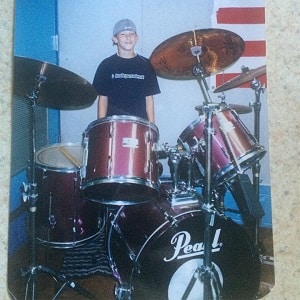 In elementary school, he would share his musical talent in talent shows; and by middle school, he was performing in a garage band alongside another local musician, Josh VanDyk.

He later joined another band called LEA. He and his bandmates would play in venues all across Florida and even in other states. So certain was he that the band was his future that he dropped out of high school to follow his musical career—a decision he does not recommend, he said.

Unfortunately, LEA inevitably broke up. He eventually received his GED, but without a college education, he could only find employment as a fast food worker at McDonald’s in Frostproof. 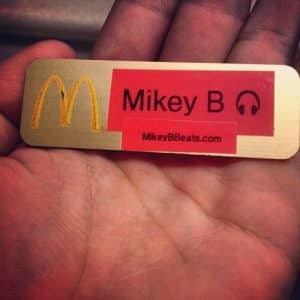 Every day, he worked the early shift from 3 a.m. to noon. When not at work, he was at home working on his music, learning how to create his own musical beats. After working three years producing his music, he was able to create enough revenue to not only quit his job at McDonald’s, but also move out of his one-room apartment to his own house in Babson Park. 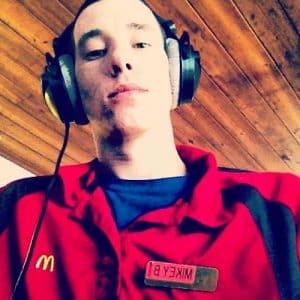 “That is basically kind of my story,” he said. “It started like something I do for fun. I went from working at McDonald’s flipping burgers every day to being a world-renowned music producer.”

As for his instrumentation, as his own musical tastes are rather eclectic, so too is his personal musical style. Growing up, he loved everything from classic rock to blues and R&B. His personal inspirations include such musicians as Hans Zimmer, bands like Steely Dan, and other producers like Johnny Juliano.

One of the very first artists he produced music for was Lake Wales rapper, Eddie Bower. Mike was one of Eddie’s first producers, the very first person other than himself to create a beat for his music.

Eddie was drawn to the drum patterns of his beats, especially with the bass. He especially loved the backbeat Mike created for his song, “Let Me Hold You”, one of his favorite records.

“His style of beat making is very unorthodox, and because it is different, it is a great and good difference,” Eddie said. “His beats have a way of catching you when you are on your cell phone. Your beat will catch you out of nowhere as something you want to listen to.”

Aside from being a close work colleague, Mike has also proven a close friend, someone who is both a talented producer that can support his music, as well as a good friend who can support his career, Eddie said.

“I believe that he is a superstar,” Eddie said. “I believe he has the potential to be even better than where he is now because he has a lot of room to grow, he is great, and he will be even greater. Outside of music, he is a great person.”

His current project includes music for “Respect the Troops”, a Jamaican film based upon a novel of the same name, which will be streaming on Amazon. He has worked with local artists, as well as artists from around the world in countries like Canada, Germany, Russia, Sweden, China, and South Africa.

Creating beats for these projects and artists can be hard work, but the end product is always worth it; and while these artists may gain most of the credit, Mike takes heart knowing that he has helped behind the scenes, almost like a stealth vigilante such as Batman.

“There are times when I have been at bars and the music I helped produce comes on the jukebox that everybody loves, and no one knows that I produced that, and I love that feeling of being that superhero in the dark,” he said.

For more information about him and his work, visit his website at: http://www.mikeyBBeats.com