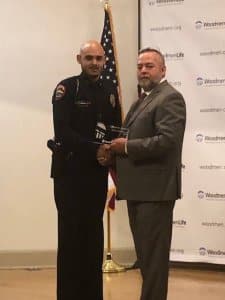 Officer Vic Ramos Receives The Law Enforcement Lifesaver Award
Officer Ramos was honored at the Woodmen Life Community Awards at the Magnolia Building in Lakeland last evening.
Officer Ramos was nominated to receive the award because of his attentiveness to a man he had just arrested and was transporting to jail. The man became unresponsive on the ride and Officer Ramos pulled over, radioed for EMS and started CPR immediately. Officer Ramos was able to regain a pulse and when EMS personnel arrived, the man was transported to the hospital. Had Officer Ramos not paid close attention to his detainee, there could have been a much more tragic outcome.
Congratulations Officer Ramos – we are very proud of you!