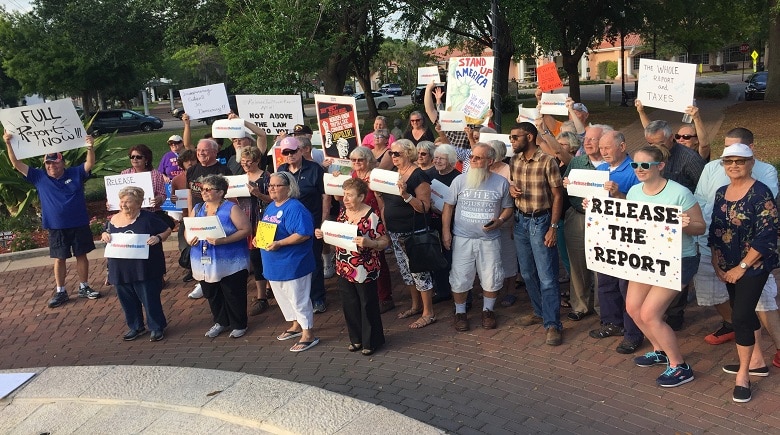 What do they want? The Muller Report. When do they want it? Now. That was the demand of local protesters rallying at Central Park in Downtown Winter Haven on Thursday evening.

Nearly 50 demonstrators congregated at the park to show their solidarity with other protesters in more than 300 rallies nationwide, demanding the public release of the full report by Special Counsel Robert Mueller.

Following a 22-month investigation into the alleged “foreign collusion” by President Donald Trump with the Russian government during the 2016 election, Muller published a more than 400-page report detailing his findings into the investigation last week.

This report, known colloquially as “The Muller Report”, was submitted to the U.S. Department of Justice. However, only a four-page summary of Muller’s principle conclusions has been disclosed to Congress by Attorney General William Barr. 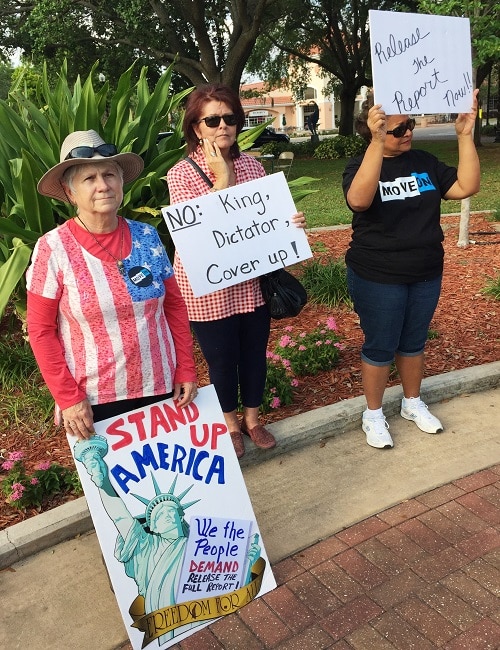 According to the summary, Muller’s investigation found no evidence that either Trump or anyone in his campaign “conspired or coordinated with Russia” during the election. Furthermore, the summary states that “while this report does not conclude that the President commited a crime, it also does not exonerate him.”

While only 36 percent of Americans trust the summary that Trump has been cleared of any alleged wrongdoing, more than 56 percent remain skeptical, with another 75 percent wanting the full report to be made public, according to an NPR poll.

More than 300 rallies were hosted on Thursday evening to voice the public demand for the full release of the report. These rallies drew 300 protesters to New York’s Time Square and 250 to the White House, according to Reuters.

In Polk County, nearly 50 protesters gathered at the park in Downtown Winter Haven to show their solidarity with other protesters nationwide and demand that Barr “Release The Report.” 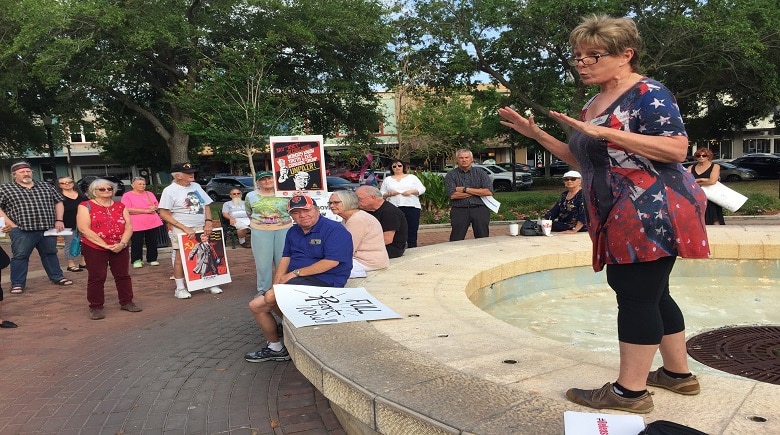 This local rally was coordinated by Katherine Sutherland, Membership and Precinct Organizing chair for the Polk Democratic Party, with the help of MoveOn, a progressive advocacy group that organized the other rallies nationwide.

“We are here to show the people in our district, in our community, in our country that nobody is above the law,” she said. “We have the backs of the people in Congress, we want to let them know that they can be strong when they are fighting for us, like when they are giving us the Muller Report.”

Like many of the other protesters, Sutherland felt that Barr was intentionally keeping the full report from the public to protect the president who had appointed him.

“It is not okay for Trump to appoint somebody who is obviously politicized, who will try to protect Trump however way he can, and then the Muller Report comes out and we only get a four page summary? That is not okay,” she said.

Bob Doyle, retired circuit judge and former candidate for Florida Senate, was one of the protesters attending the rally that evening. He, too, believed that there were details within the report being purposely withheld from the public. Thus it was up to members of the public to demand that their elected officials release the full report.

“We have to recognize that our expectations are going to be fulfilled over a period of time,” he said. “It will not happen tomorrow or next week, so we have to keep the pressure until it happens. It is up to us to get something done…our part has got to be done tomorrow and the next day and the next day and eventually we will win this thing. We will be able to get the report and read this thing.” 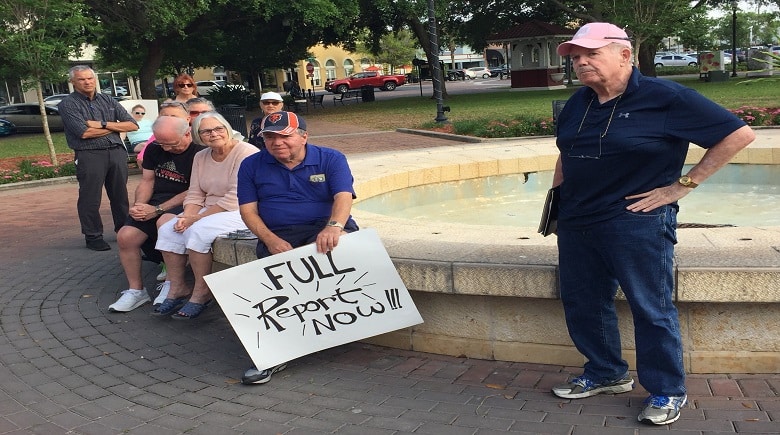 Bill Summer, former criminal defense attorney, and a self-proclaimed “recovering former Republican”, called the entire ordeal with the report and the Presidential administration a “game of wack-a-mole” that required Democrats like himself to maintain their a-game in order to achieve victory.

“They put something up, our side has to be ready to fight it if we are able to fight within that arena,’ he said. “You could not have had Van Gough put up a brand new canvas, take up all his colored pastels, and paint a better picture of a rotten, crooked, no good, Republican son of a pup than William Barr.” 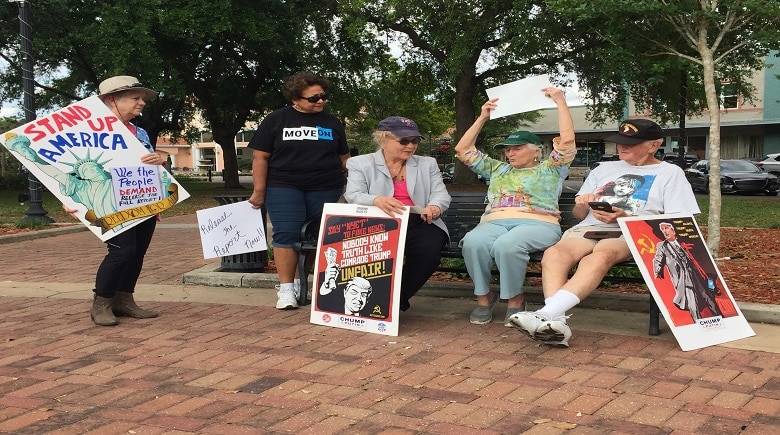