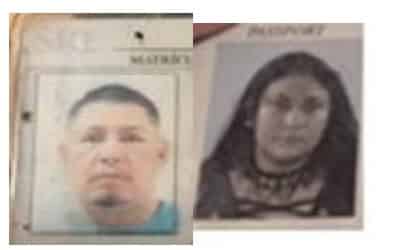 HAINES CITY, FL – A Haines City couple was arrested for aggravated child neglect with great bodily harm, a second-degree felony, after a child, 2, in their custody was reported and observed with multiple injuries.

Alejandro Gallardo, 34, and live-in girlfriend Yuri Melgar, 33, were both arrested early Monday. Detectives initially received a complaint from Department of Children and Families about 10 p.m. Sunday night while the child was at Arnold Palmer Hospital in Orlando being treated for dual ear drainage.

Other injuries to the child included multiple scratches on his head, back and torso, multiple sores, very thin legs, a protruding rib cage, rotten and chipped teeth. The child had a fractured or broken left arm that was not properly treated and an open wound about two inches in diameter on the left forearm. The child was unable to stand, walk or crawl and didn’t appear to have been bathed in days.

“To treat an animal this way would be an outrage, much less a child,” Chief Jim Elensky said. “We appreciate DCF bringing this to our attention and our detectives for their swift action.”

Detectives arrived at the couple’s apartment overnight Sunday and found a well-kept residence with three other children who appeared to be properly cared for. The apartment appeared to be neat and clean.

Gallardo said he has had custody of the child since January. Melgar is the child’s primary caregiver.

Both Gallardo and Melgar are undocumented and are being detained by the U.S. Department of Homeland Security. DCF has placed the child with a family friend.

“This child deserves a normal childhood — to be loved and properly cared for – and can hopefully find that moving forward,” Elensky said. “These actions, or lack thereof, are nothing short of reprehensible.”