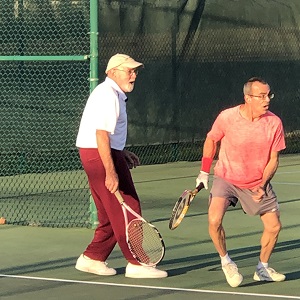 Many things have changed within the past 25 years. But the more things change, the more things stay the same. Over at the tennis courts in Lake Wales, one thing that has remained constant has been the presence of two best friends.

Roy Johnson, owner of Southern Land Surveyors, and John Steedley, former owner of the Cash Connection, have been playing tennis together every Monday and Thursday evening for the past quarter century. Both have rarely, if ever, missed a game during that time.

Their time at the tennis courts together has seen their games grow from two players to four, with the addition of two other friends, Greg Griffith and Dave Smith, both of whom have been playing along with them for the past 17 years. 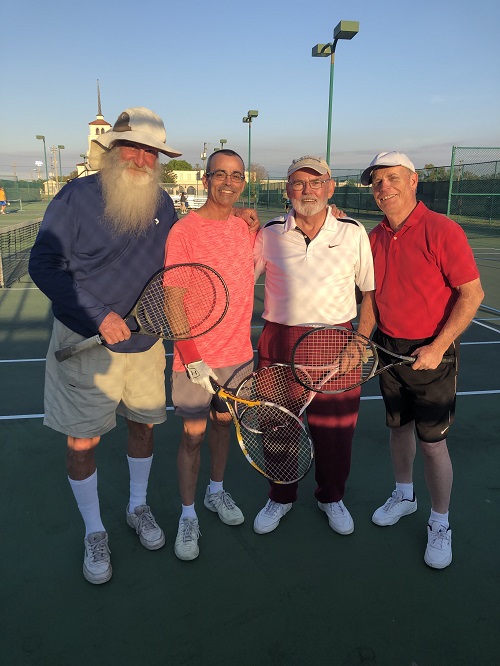 These four local businessmen and good friends have shared the courts together consistently twice a week every week. However, with the initial two friends advancing in age, and with Smith planning on moving away to Las Vegas, they have since decided to hang up their rackets.

Their very last game was played on Thursday, March 7, thus ending nearly a quarter century of a personal, local tradition. The four gathered together with family and friends at Norby’s in Lake Wales for one final dinner to reminisce on the memories made and the games played. 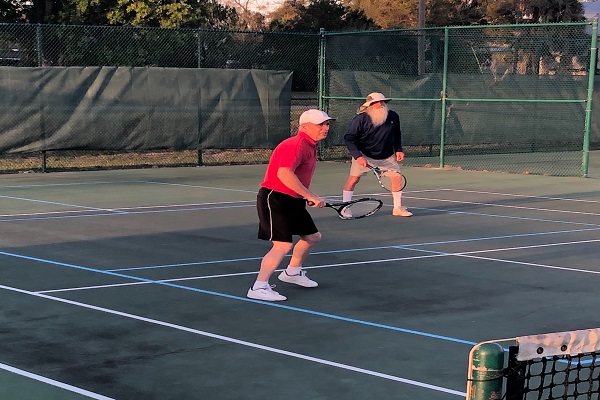 For Johnson, what has allowed him and his good friends to play so many games for so many years have been the camraderie they have all developed with one another during that time, with them all growing close together almost like brothers.

“Without a doubt, it was the friendship that kept us going,” he said. “And it was great exercise. You show up because you know everyone is depending on you to show up, whether you feel like it or not.”

A lifelong Lake Wales native, Johnson has been playing tennis on and off most of his life as an amateur. He never took any tennis lessons, though he was once involved with an advanced amateur player who played at the local country club, he said.

There was a gap in his life where he stopped playing for 25 years. He began playing again once his daughter, back in her middle school years, became enrolled in tennis at school.

“I figured I had to step up my game if I would be able to stay even with her,” he said.

Seeking another player, he sought out his friend, Steedly, and asked to play with him. The two had been playing together over the past 25 years since then, he said.

Steedly himself, also a lifelong Lake Wales native, had been playing on the tennis courts most of his life. He practically grew up on those courts, he said. When he was asked to play with Johnson, he also had not played tennis for quite some time; so getting back into the game was a re-learning experience for both of them.

“He brought me on because I hadn’t played for a long time,” Johnson said. “He was better than I am—or at least he was.”

Since then, the two friends have met every Monday and Thursday evening to play at the Lake Wales tennis courts. Neither of them ever had to mark or check their calendars nor call the other beforehand. As certain as they were that the sun would rise and set that day, they knew they would meet each other on those courts for their regular games.

“We never had to call each other up asking when they will show up: we just knew that we would all show up that night,” Steedly said.

In fact, the only time the two would ever miss their scheduled tennis game, save perhaps sickness or injury, would be when either one left on vacation. It was during those rare times, even when they were enjoying their vacation, that they would express their longing for the game.

“Even when they were on vacation, he missed the fact that we he was missing a Monday night,” Johnson’s wife, Mary Ann, said, mentioning their one trip to Colorado a few years ago.

Steedly chuckled and remembered that time well: “He was on vacation one time and I called him telling him we has running late.”

The only people who knew more about their whereabouts during those times, other than their wives, were the tennis court staff. Even when the courts were busy that evening, especially with high school or college games, the staff members would save a court just for them, and they would even dry the courts off after a heavy rain, Steedly said.

Such a close camraderie the two formed during the past quarter century on the courts that they grew close like brothers. Of course, when the two entered a heated disagreement about the ball and where it landed, they acted much more like a married couple, Johnson said.

The more memorable games were those that either won against Smith. With him being the youngest member, he was also the most nimble, so being able to overcome his prowess was a victory well worth remembering, Johnson said.

Being the youngest member of the group, Smith appreciated being able to gain experience from the two eldest members. He will miss being able to play tennis together with them, and will remember the moments they shared together fondly, he said.

“I enjoyed playing with these gentleman,” he said. “They are fine, fine tennis players. Even much better human beings. They made me a much better player, and they have all been great players the whole time…It has been a great experience, and I will love them through the rest of my life.”

As for their other member, Griffith, while Johnson and Steedly may be hanging up their rackets, and Smith is moving to Las Vegas, he plans on continuing playing tennis, and doesn’t plan to stop until his own body stops, he said.

“As far as retiring, I don’t think so,” he said. “I’m sure there’s a little left in there in the tank. Until anything physical stops me, I will continue on from here.” 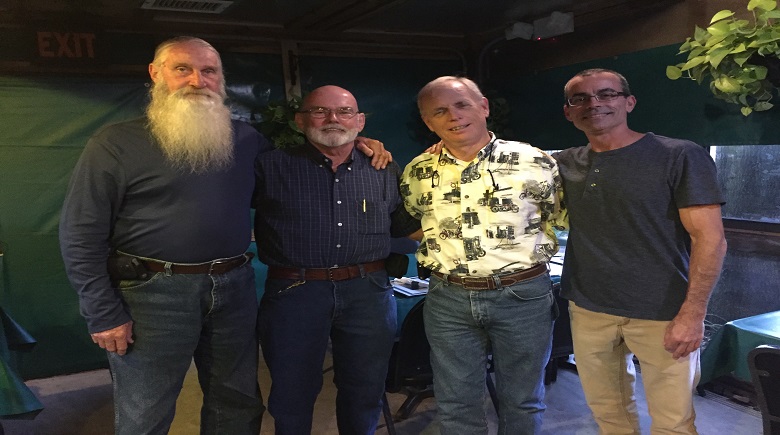