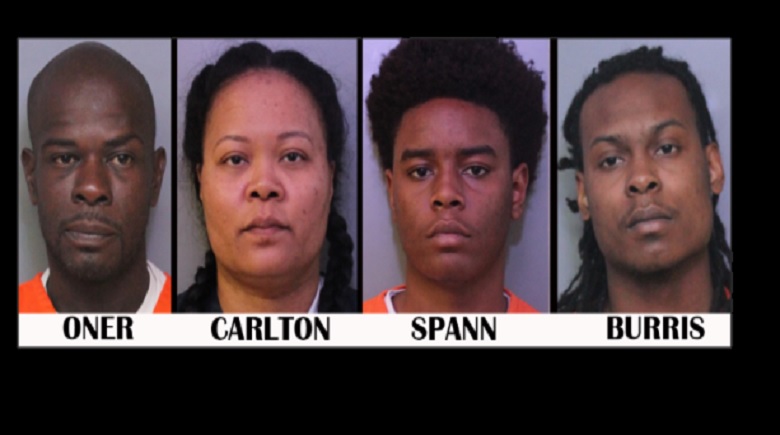 The Polk County Sheriff’s Office arrested four people in a single Lakeland residence on Tuesday, March 12, 2019, after it was learned that illegal drugs were being sold from the home. Deputies first became aware of the drug activity at 7428 Loblolly Avenue in Lakeland, after a traffic stop on February 13, 2019 in which the driver was in possession of crack cocaine that he said he purchased at the home.

Using the information from the traffic stop, deputies began an investigation of the home and the people living inside.

Evidence from the investigation was presented to a judge who granted PCSO a search warrant on March 6, 2019.

On the morning of March 12, 2019, a search warrant was executed at the residence in the Summer Oak neighborhood, and five people were located in the home.

Inside the home, marijuana, multiple new and corner-less plastic baggies, a digital scale, drug paraphernalia, cash, and three handguns were found. One of the handguns was equipped with an extended 25-round magazine, and another .45 caliber handgun had been reported stolen to PCSO in 2018.

A Volkswagen Jetta was also searched on the property with crack cocaine and marijuana being found.

The residence is within 1000-feet of Northside Baptist Church, which led to enhanced charges against three of the four people arrested.

“Many times, we get tips from the public about this kind of drug activity, but in this case, it was information from a crack cocaine buyer, followed by some great detective work. These folks were dealing drugs, had weapons, and are implicated in other burglaries-all in a nice residential neighborhood where children play and right around the corner from a church. As always, please call us with tips about drug activity or send them to Crime Stoppers and earn some extra cash.” – Grady Judd, Sheriff

An unrelated investigation involving credit card fraud and burglary was linked to the same residence.

On August 16, 2018, two vehicles were burglarized in the West Campbell Road area (less than one mile away from the Loblolly residence), and several credit cards were stolen. Two Sony PlayStations were purchased using the credit cards. The transactions were made from an IP address assigned to the Loblolly home.

During the search of the home, a detective discovered the two PlayStations by matching serial numbers to Sony purchase records.

Jamaru Spann was charged with the two burglaries, grand theft, petit theft, and illegal use of a credit card. Spann was 17 at the time of the burglaries, and these charges were processed through the Juvenile Assessment Center in Bartow.

The following were arrested in the home, and are all residents there: