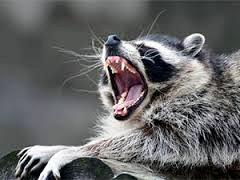 On January 23, 2019, a woman visiting a residence on Hammockview Drive in Lakeland, noticed a donkey with an animal in its mouth. When she came back outside with the homeowner, they discovered that the animal was a dead raccoon, so they contacted Animal Control.

The raccoon was collected and sent out for rabies testing.

Results of the test were received on January 25, 2019, which confirmed rabies.

The homeowner has two donkeys, but it was unknown which one had the raccoon in its mouth. Both donkeys were placed in a six-month quarantine.

There were three confirmed rabies cases in Polk County in 2018.