Explaination for Nearly $1.3 Million Returned to Board of County Commissioners

There have been a lot of questions asked about the Sheriff’s Office returning nearly $1.3 million to the Board of County Commissioners on Tuesday. The money is what was left over from our fiscal year 2017-2018 budget.

Before I answer some of the questions we have been asked, it is important to remember that the budget for a government agency is not the same as a budget for your home or a business. When you are working with money provided by the taxpayers, there are certain rules you have to follow that dictate how the money can be used, and money earmarked for one purpose a lot of times can’t be spent in another area.

Here are the answers to the most frequently asked questions about the money we gave back:

Where did this extra money come from?

How do you end up with excess?

In such an unpredictable line of work as law enforcement, our budget is a series of moving targets. Say, for example, we budgeted $100,000 for uniforms for the last fiscal year but ended up using only $90,000 of that. That leaves $10,000 left over. The same thing can happen in line items for things like computers, weapons, vehicles and salaries/overtime.

We have to do a lot of predictions when we make our budget for the upcoming year, and it is almost impossible to hit all of those predictions on the nose, or even close to on the nose in a lot of cases.

Why give the extra back? Why not save it for next year?

We give money back to the county every year. Last year, for example, we gave back around $400,000.

We are mandated by law to return any unexpended money. If you have money left over at the end of the year, you get to put it in the bank and save it for a rainy day. The county commissioners also have a “reserve for contingency” fund that they can hopefully build up with any extra cash. That comes in handy when you have unexpected expenses, such as when a hurricane comes through and results in a huge amount of unexpected overtime or an inmate suffers a medical emergency at the jail.

We are only allowed to have $25,000 in our annual budget specifically for contingency purposes. That means we have to basically formulate our budget using our best guesses as to what we will need while being able to have some wiggle room, knowing that anything we have left over will be given back to the county.

Why not buy extra stuff with the extra money?

Anything we spend our money on has to be delivered by Sept. 30, right before the end of the fiscal year (which starts on Oct. 1). By the time we begin to get a handle on how much money we may have left over in the budget, we don’t realistically have enough time to take delivery of any items we might like to spend that money to get. We may want some more computers or cars, but we can’t just walk onto a car lot and pick out a few we like. There is a multi-step procurement process for large items and it takes time to get it done.

Also, while there may be some things we would like to have, such as a lot more new cars, they are not things that we necessarily need right now. And buying things that we don’t absolutely need is not good stewardship of your tax dollars.

Why didn’t you give everyone a raise?

We have to budget our salaries for the upcoming year, and for the year that just began all of our members got a 3 percent raise. We also can’t use that money to give everyone a bonus.

It helps to think of the money we spend as coming to us in buckets that are labeled for certain areas. The buckets have covers on them, though, so we can’t take money from one and move it to the other. We also can’t take the contents of the bucket and pour it out in another place. Leftover money earmarked for jail medical expenses, for example, can’t legally be used to give all the nurses in the jail a raise.

Why didn’t you use it to hire more deputies?

We have several open positions and are looking for people to fill them. We are not saving money by intentionally leaving deputy spots unfilled. We would much rather spend all of our available salary budget than have to try to protect the county with a short-handed roster.

I hope this helps explain how we had extra funds left from last year’s budget and why we gave them back to the Board of County Commissioners. 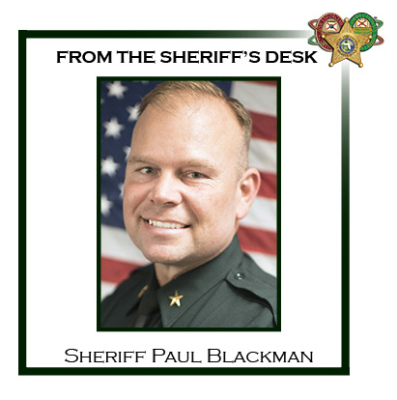 Tech Tuesday: Since Covid-19 Online Sales have spike 2x-3x normal levels. Learn how to protect your online purchases below.