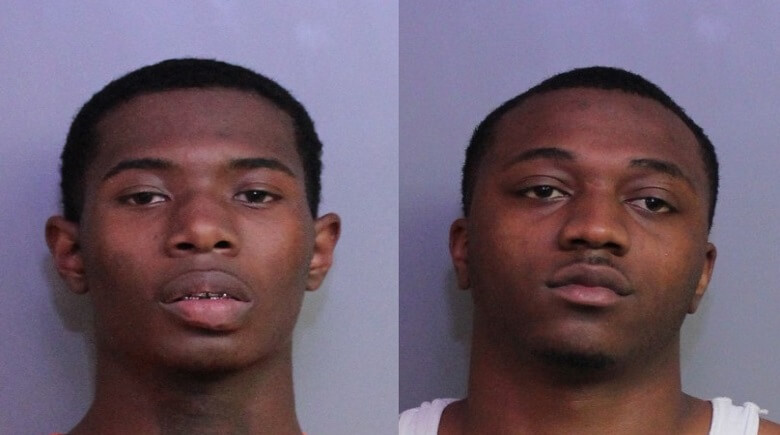 Two Tennessee men have been arrested on drug and weapon charges after a traffic stop was conducted when they didn’t observe the “move over” law.

On May 8, 2018 (this morning) at 2:55 a.m., Winter Haven officers were conducting an investigation of a traffic crash along Cypress Gardens Blvd. when a vehicle traveling at a high rate of speed failed to move over or slow for the emergency vehicles in the roadway. A traffic stop was conducted and the driver, 19 year-old Stephan Strong (DOB 7-27-98, 2448 Kimbark Woods CV, Memphis TN) identified himself, but handed the officer a Tennessee Learners Permit. The front seat passenger 19 year-old Albert Smith (DOB 10-17-98, 2448 Kimbark Woods CV, Memphis TN) identified himself as the registered owner of the vehicle.

The officer smelled a strong odor of marijuana coming from inside of the vehicle, so Strong was asked to get out of the vehicle. The officer conducted a pat down and found a baggie of marijuana tucked inside of Strong’s underwear. Smith was then ordered from the vehicle and as he was getting out of the vehicle, officers saw a black handle wedged under the seat that appeared to be a firearm. Underneath the seat was a black Glock .45 caliber pistol with six rounds inside of the magazine and one in the chamber. A check of the gun revealed it was confirmed stolen from Tennessee. Smith also had a small marijuana blunt in his possession.

A further search off the vehicle revealed a black Glock .40 caliber pistol underneath the driver’s seat where Strong was sitting. The pistol, that had the serial number filed off, had 15 rounds in the magazine and one located inside of the chamber.

“This is a prime example of the danger our officers face each day when they conduct traffic stops,” said Chief Charlie Bird. “Their keen observation and attention to detail has at least one stolen gun off the street and two criminals behind bars.”