To be harvested, stone crab claws must be at least 2.75 inches in length when measured from the elbow to the tip of the lower immovable portion of the claw (see illustration). View a video on how to properly remove the claw on the Florida Fish and Wildlife Conservation Commission’s (FWC) YouTube channel and increase the likelihood of survival of the released crab. 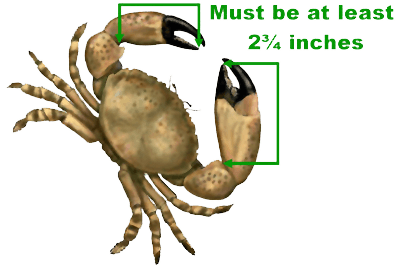 Claws may not be taken from egg-bearing stone crabs. Egg-bearing females are identifiable by the orange or brown egg mass, also known as a “sponge,” which is visible on the underside of the crab when it is picked up or turned over.

Recreational harvesters may use up to five stone crab traps per person. Stone crabs may not be harvested with any device that can puncture, crush or injure a crab’s body. Examples of devices that can cause this kind of damage include spears and hooks. Recreational and commercial traps may be baited and placed in the water 10 days prior to the opening of the season, but may not be pulled from the water for harvest purposes until Oct. 15. Traps that are not being fished should be removed from the water to avoid ghost fishing, a process in which marine species get caught in the trap for extended periods of time and are not harvested.

Round entrances (also known as throats or funnels) are not allowed for stone crab traps used in state or federal waters off Collier, Monroe and Miami-Dade counties. The rectangular or rounded rectangular entrances typically used in stone crab traps in these waters must be no larger than 5.5 by 3.125 inches at the narrowest portion of the opening. Stone crab traps being used in other areas of the state may have an entrance that is 5.5 by 3.5 inches. 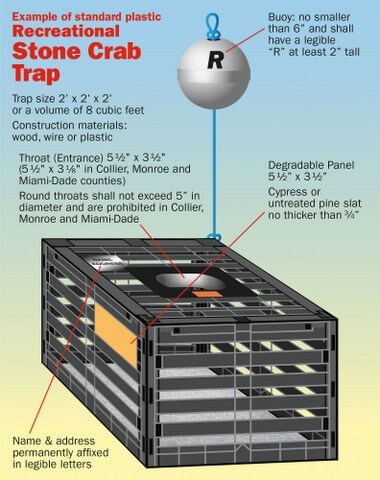 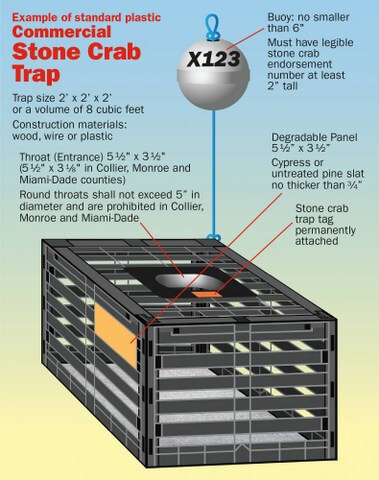 Harvesters are encouraged to take only one claw, even if both claws are of legal size, so that the released crab will be better able to defend itself from predators. A crab that is returned to the water with one claw intact will be able to obtain more food in a shorter amount of time and therefore regrow its claw faster. There is a recreational daily bag limit of 1 gallon of claws per person or 2 gallons per vessel, whichever is less.

Stone crab regulations are the same in state and federal waters.