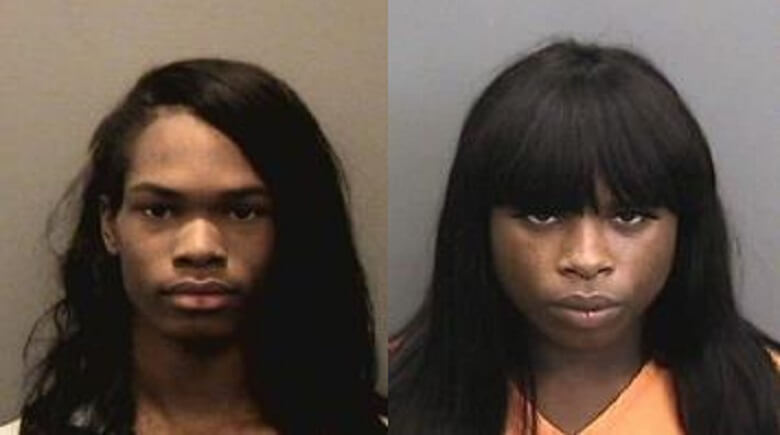 Two Polk County strong-armed robbery suspects who had PCSO warrants for their arrests were arrested in Jefferson Parish, Louisiana, during the late evening hours on Sunday, July 9, 2017.

18-year-old Omar McCrae and 19-year-old Malik Taylor were positively identified as two of three male suspects dressed as women who committed robberies at a Lakeland Home Depot, and a Winter Haven Home Depot, on June 22nd and July 3rd, respectively. The Polk County Sheriff’s Office issued warrants for their arrests on July 6, 2017.

Last night, they were arrested at a hotel in Jefferson Parish, LA, and some of the stolen gift cards from Polk County were in their possession. Detectives are still working on positively identifying the third suspect. It is unknown at this time why they were in Louisiana.

The following are excerpts from McCrae’s and Taylor’s affidavits, and are self-explanatory:

The co-defendant, Taylor, scanned 8 gift cards at self-checkout kiosk #58. The gift cards were scanned for $100 each and included 6 American Express gift cards and 2 MasterCard gift cards. A $5.95 gift card activation fee was charged to each card, totaling a $47.60 activation fee, totaling a charge amount of $847.60. The co-defendant utilized a MasterCard ending in #3297 at self-checkout kiosk #58 to charge $40.84 towards the balance of the gift cards scanned. It was determined when the defendant, McCrae, accessed the associate’s terminal computer, he overrode the transaction and entered a $900.00 cash payment, which caused the store’s computer system to believe a total of $940.84 had been paid to the store through the cash and MasterCard transaction. Due to the transaction total entered by the defendant and the MasterCard payment processed by the co-defendant, the Home Depot computer system issued a $93.24 cash return through kiosk #58 ($940.84 transaction minus the balance of $847.60). The defendant and co-defendant took the cash and the eight $100 gift cards into their possession and fled from the store.

Both Omar McCrae and Malik Taylor have warrants for Robbery (F-2) for the Lakeland Home Depot robbery.

It was determined the defendants successfully scanned and activated 13 Visa gift cards at $100.00 each. In addition, each card activation charged $5.95, for a total activation fee of $77.35. As the defendants were fleeing from the establishment, they dropped 1 gift card and ran with 12 cards. The total value of gift cards the defendants stole or endeavored to steal was $1377.35.
Deputies observed video surveillance of the incident and recognized the defendant as wearing a pink outfit. Contact was made with store associate Heather Holby, who approached the self-checkout kiosks after hearing victim 2 yelling for assistance. Holby was shown the photograph lineup consisting of the defendant, Omar McCrae, and 5 other individuals with similar characteristics. Holby selected #1, positively identifying the defendant as one of the suspects she observed at the self-checkout kiosk with their hands on victim 2.
Contact was made with victim 2, who stated she was attempting to block the defendant from overriding the Home Depot computer system when the defendant forcefully grasped her arm, attempting to move her. She stated the defendant then placed his arm around her neck and pulled her away from the terminal computer so the unidentified suspect could access the computer, entering a fraudulent cash transaction and activating the selected gift cards. The defendants fled from the store with the activated cards.
Omar McCrae has another warrant for Robbery (F-2) for the Winter Haven Home Depot robbery.

McCrae and Taylor will be extradited to Polk County at a later date. Detectives are still working to identify the third suspect. Although the Jefferson Parish County Sheriff’s Office online inmate search shows both in custody, their mugshots do not appear to be available (the link is provided for your convenience below).

Omar McCrae and Malik Taylors mugshots photos are from a previous arrest in Hillsborough County.