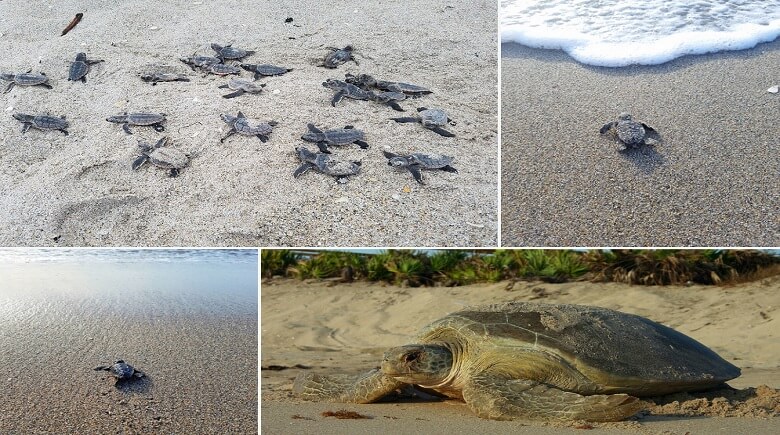 March is the beginning of Florida’s sea turtle nesting season, when female sea turtles leave the ocean to dig nests and lay golf ball-size eggs in the sand.
People can help sea turtles that nest on Florida’s beaches at night by leaving the beach as natural as possible. To do this, beachgoers should remove beach furniture and other obstacles before sunset each day.
“Anyone spending time on Florida’s beaches can do something to help save Florida’s threatened and endangered sea turtles. People’s actions on the beach can have a positive impact on whether our loggerhead, leatherback and green sea turtles nest successfully,” said Dr. Robbin Trindell, who leads the Florida Fish and Wildlife Conservation Commission (FWC) sea turtle management program.
“Whether you are a resident or a visitor, remember to take beach furniture, boats and canopies off Florida’s sandy beaches at night so these items won’t block sea turtles attempting to nest,” Trindell said. “When departing at the end of the day, beach visitors should fill any holes dug in the sand so nesting and hatchling turtles don’t become trapped. Please be careful not to disturb nesting sea turtles by getting too close, shining lights on them or taking flash photos.”
At this time of year, FWC-authorized marine turtle permit holders and volunteers begin their annual ritual too – walking beaches in the morning to look for “crawls” resembling tire tracks. Crawls indicate a sea turtle has landed and nested on a beach the previous night. On some of the beaches, nests are marked with a yellow sign and plastic tape, since sea turtles and their eggs are protected. This monitoring continues through October, the official end of sea turtle nesting season.
Exactly when sea turtle nesting season starts depends on where you are in Florida. While it begins in March on the Atlantic coast, it starts later in the spring, in late April or May, along the Gulf coast. Yet wherever you are in the state, what you do on the beach can make a significant difference on whether sea turtles nest successfully.
In the 2016 sea turtle nesting season, more than 120,000 loggerhead nests, more than 5,000 green turtle nests and over 1,000 leatherback nests were documented by the FWC. With Florida hosting nearly 90 percent of loggerhead nests within this species’ northern Atlantic Ocean population, the state plays an important role in its conservation.
You can help sea turtles by reporting those that are sick, injured, entangled or dead to the FWC’s Wildlife Alert Hotline, 888-404-FWCC (3922), #FWC or *FWC on a cellphone, or text [email protected] Purchase of a “Helping Sea Turtles Survive” Florida license plate at Buyaplate.com contributes to sea turtle research, rescue and conservation efforts. People also can donate $5 and receive an FWC sea turtle decal.
Go to MyFWC.com/SeaTurtle for information on Florida’s sea turtles and how to get decals, and click on “Research,” then “Nesting” for more data on sea turtle nesting.
March 1, 2017