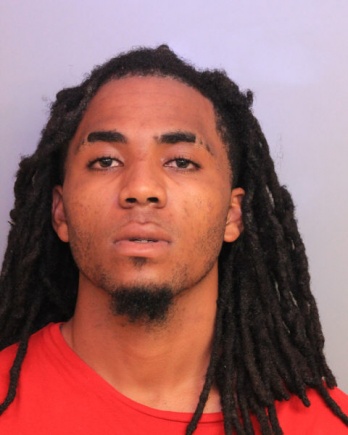 LAKELAND, FL – On October 5, 2016 at approximately 10:40 p.m., Officer Derek Gulledge observed a vehicle in the area of Ingram Avenue and S. Road 98, that had cut him off in traffic causing him to hit his brakes. Officer Gulledge then ran the tag of the vehicle and it came back listed as a 2015 Nissan Altima, 4-door stolen out of Winter Haven on August 19, 2016.

Officer Gulledge followed the stolen vehicle waiting for additional police units to assist and he did not use his emergency lights at this time as not to alert the driver. At Kathleen Road and 10th Street, officers attempted to block the stolen vehicle in to prevent a pursuit. The driver was able to maneuver his vehicle around the police cars and avoid being blocked in. The suspect accelerated fleeing to the Lakewood Terrace Apartments, 1315 West 14th Street.

The driver entered the main entrance in the middle of the complex and tried to stop the vehicle and it slid into a tree. The suspect then jumped out and fled on foot. Officers observed two additional passengers in the vehicle and they were taken into custody without incident for questioning. The driver was observed by another officer running into the breezeway of an apartment building. Additional officers on the perimeter were confident the suspect was in one of four apartments.  Further investigation by the officers revealed that one of the passengers, Larexia Honors lived in apartment #D-14 on the second floor in the same area that the suspect was believed to be hiding. The other three nearby apartments were checked and cleared by the officers. Honors gave the officers a verbal and written consent to check her apartment for the suspect.

Officers knocked on the door and no one responded. Police K-9 responded to assist and officers unlocked the door at which time two verbal warnings for the suspect to surrender were given. After no response was heard, the K-9 was released into the apartment and officers immediately heard a gunshot. Officers entered the apartment and located the suspect in a bedroom with a single gunshot to his forehead, and the handgun lying underneath him. The handgun is a KEL-Tec, PF-9, and it was loaded with six additional rounds. The suspect was transported to Lakeland Regional Health in grave condition.

Detectives responded to the scene and the two passengers were interviewed. Both passengers said they had been picked up earlier by the suspect in Lakeland. The mother of the suspect was also interviewed and she stated that during this time frame, the suspect called her and stated, “I’m not going back to jail, I’m going to kill myself” and then he hung up.

The suspect has been identified as Dayoshis Carter, 19 years of age, 407 Lee Street, Auburndale, Fl. He has a total of 13 arrest some of which include:

No officers fired shots or were injured during this incident and it’s very unfortunate that Carter decided to shoot himself instead of turning himself in. This investigation is still ongoing and for additional information of the stolen vehicle, please contact the Winter Haven Police Department.