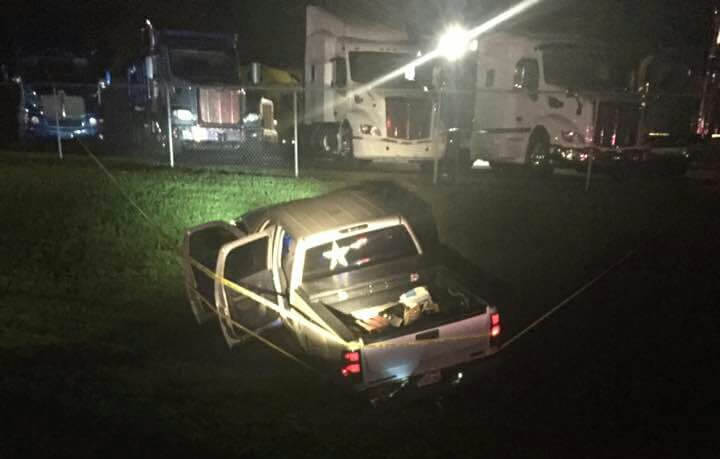 Lake Hamilton, Florida –  On September, 5, 2016 at approximatly 2:54am Polk County Sheriffs Deputies were patrolling businesses of Posner Park in Davenport when they located a 2008 Silver GMC pick up truck and saw it turn around suspiciously in Posner Park heading back out to U.S. Hwy 27.  They got behind the vehicle, ran the tag and found it was a stolen vehicle (PCSO case)
The stolen vehicle, occupied by two suspects, traveled south and was initially obeying all traffic laws/speeds.  Stop sticks were approved and Haines City Police Department and SE DistrictsPCSO units were enroute to start setting up stop sticks.  The Air Unit was unable to respond due to inclement weather.
A traffic stop was attempted with lights& sirens and the suspect vehicle fled South on U.S. Hwy 27. As the stolen truck approached Airport Rd, a HCPD officer was able to successfully deploy stop-sticks in front of the stolen pick up truck.  It continued to flee, shredding the front tires.  A PCSO deputy was able to get into position and was able to perform the P.I.T. maneuver, making contact with the left side quarter panel and spinning the stolen vehicle out into the East side ditch area of U.S. Hwy 27, directly in front of the Peterbilt Trucking Company located at 915 Roberts Rd., Lake Hamilton, Fl.
The P.I.T. maneuver immediately ended the pursuit and the suspects bailed from the vehicle on foot.  The passenger
suspect Jovan Tavarus Washington (15 yrs old)  of 2nd St. NW Winter Haven, was immediately apprehended near the stolen vehicle.  The driver/suspect Christopher Dwayne Lewis (17) 2nd St. NW Winter Haven, ran from the vehicle and trespassed onto the Peterbilt Trucking compound by scaling a fence and HCPD Officer Smith immediately deployed K-9 Roy.  K-9 Roy located and apprehended the suspect via K-9 bite with the assistance of perimeter units.

Both juvenile suspects were arrested, the stolen vehicle was searched and a backpack containing jewelry still with price tags on the jewelry was located.  Both suspects were also wearing gloves when apprehended.  It was learned that this stolen vehicle was one of two that were stolen from a residence on Ave. D NE Winter Haven, Fl, the second vehicle being a 2011 silver Ford Focus, the keys to which were found within the the stolen truck (both PCSO cases).

It is suspected the jewelry was stolen during a business burglary to Max jewelry store located at the Lakeland Lakeside Village Mall, 1553 Town Center Dr. Lakeland, Fl.  (LPD case). LPD Detectives responded to identify the stolen property and conduct interviews of the suspects.

Both juvenile suspects (cousins residing at same residence), were arrested for the listed charges and transported to JAC in Bartow.  The juveniles’ guardians were notified of their arrest.

Editors Notes: The Dailyridge.com is providing the names of these juvenile offenders as 1 or more of the above charges is a felony.