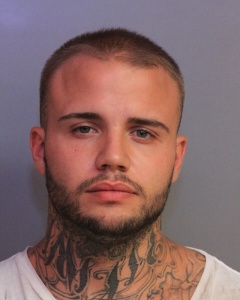 Lake Wales, Florida – On Firday night, August 5, 2016 the Lake Wales Police attempted to conduct a traffic stop at the intersection of Hwy 27 & Washington Ave. As officers Hartwell and Peck exited their vehicle and began to approach the suspect vehicle, the driver put the vehicle into drive and fled. Officer Hartwell shut down their emergency lights and followed as the vehicle fled across Hwy 27 west onto Northside Dr. The information was dispatched out as officers respond to assist with locating the suspect vehicle. The vehicle was later located near 206 Northside Dr. Deputy Shaw was requested to responded to assist due to the location. While attempting to locate the occupants a black male juvenile approached Officer Peck. He claimed he was coming to the residence because his family called him about her dogs barking. When questioned about the vehicle he claimed he knew nothing about the vehicle but it belonged to his cousin. He could not advise his cousin’s name. Officer Schwarze observed a subject pop out of the darkness on the south side of the residence. Upon seeing Officer Schwarze the subject fled on foot. Officer Schwarze yelled for him to stop. Other officer then assisted and chased after the subject clearly yelling “Stop Police”. The subject, later identified as Wesley Whitmore, DOB: 10/18/1993 , ran north through several yards before jumping over a fence. Officer Hernandez began to jump the fence after Whitmore at which time he yelled stop again and then yelled taser. Whitmore fell to the ground and complied with commands. As a result of the investigation Whitmore was charged with fleeing to elude and resisting without violence.  Whitmore was booked into the PCJ. The juvenile was released to a parent.

This isn’t the first time Whitmore has been involved with the law. He was listed as a registered felon on  11/27/2013. He has been arrested 7 times in Polk County.