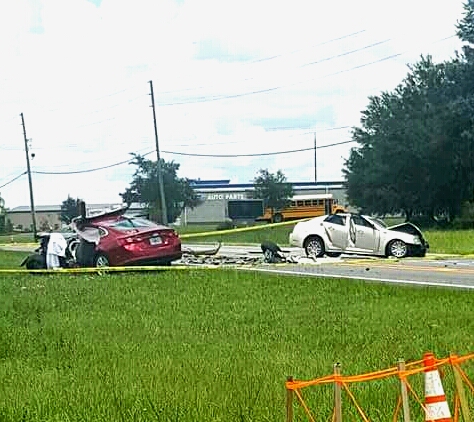 Lake Wales, Florida  – July 24, 2016 Lake Wales Police Department officers responded to a traffic crash on North Scenic Highway, just north of Florida Avenue. The two vehicles involved were a 2012 White Cadillac and a 2016 Chevrolet Malibu. The Cadillac was northbound on Scenic Highway being driven by Kristina Fitts, age 26 of Winter Haven. The Malibu was southbound on Scenic Highway being driven by Elmer Lear, age 89 with his wife, Janet Lear, age 80 as the front passenger.  Both are residents of Lake Wales.

Just north of Florida Avenue, the Cadillac driven by Ms. Fitts crossed over the center double yellow lines and safety zone into the travel path of the Malibu driven by Mr. Lear. The impact of the vehicles was nearly a head-on collision in the southbound lanes. Ms. Fitts was transported to Lake Wales Medical Center and released. Mr. Lear was airlifted by medical helicopter to Lakeland Regional Medical Center where he later died from his injuries. Mrs. Lear was transported to Lakeland Regional Medical Center and was listed in critical, but stable condition.

This is an on-going investigation at this time. Anyone with information should contact Officer Jerome 863-678-4223 Ext. 520.