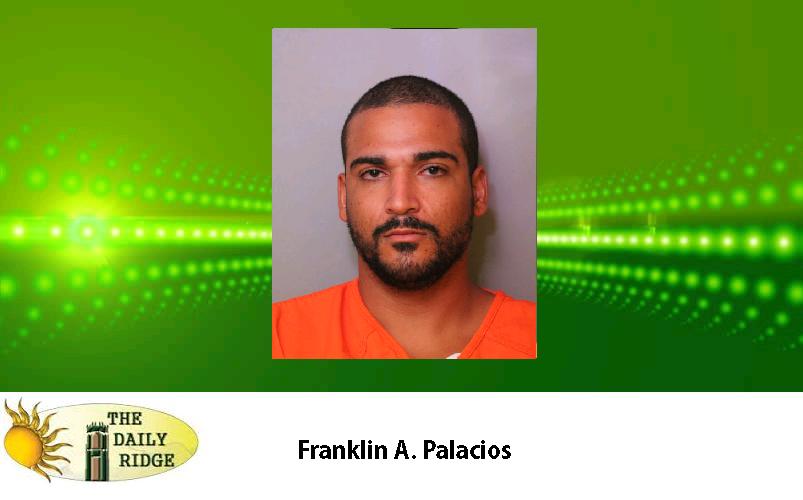 Lakeland, Florida – According to a Polk County Sheriff’s a Lakeland man was critically injured when an acquaintance allegedly stabbed him 30  times. According to the arrest affidavit on 06/16/2016 at 11am , the victim, Dale Dewitt arrived at a residence located at Village Lakeland Mobile Home Park 433 Skyline Drive East in Lakeland, Florida in the company of the defendant (later identified as Franklin A. Palacios DOB: 8/1/1989 ). At approximately 1:15pm the Palacios allegedly attacked the victim while in the kitchen area at the residence. Palacios allegedly struck the victim in the face, breaking the victim’s nose and orbital eye socket during the altercation. Palacios then allegedly armed himself with a knife and stabbed the victim over 30 times in the head, face, neck, chest, arms, and stomach. The victim sustained life threatening injuries to include a collapsed lungs and bleeding in his stomach. As the victim laid in the kitchen of the residence, bleeding from his wounds, Palacios allegedly began to load property into the victim’s gray 4 door 2010 Nissan car. The victim exited the residence and collapsed facedown underneath the carport. As the victim laid helpless on the ground underneath the carport, Palacios continued loading property into the victim’s vehicle.

During the coarse of the investigation it was learned that the victim Dale Dewitt was allegedly involved in multiple gay relationships. According to the affidavit Dewitt would allegedly rent rooms for people he was in a relationship. During the investigation one source advised deputies of several male subjects that Dewitt had relationship with and one of those was a man named Landon Lemus who would stay at the Howard Johnsons in Lakeland.  Polk County Sheriff’s Office Detectives responded to the Howard Johnson in Lakeland, Florida and learned that the Landon Lemus and an associate, later identified as Palacios, were banned from renting any further rooms at the establishment.

During the coarse of the investigation three witnesses confirmed that Franklin Palacios was the person seen leaving the residence where the victim lay bleeding in the victims car. He was also positively identified holding the bag that contained the kitchen knife and the bottles of alcohol.

Palacios was taken into custody on 06/18/2016 and transported to the Polk County Jail. He has been charged with Attempted Murder in the 2nd Degree, Grand Theft of A Motor Vehicle and Burglary. He currently remains in jail and bond has been set at $27,000. At this time he has not been charged with a hate crime.

According to the Polk County Sheriff’s Office the victim is currently in critical, but stable conditions.