February 29 – The Lakeland Magic announced today the team has waived Reggis Onwukamuche after acquiring the returning player rights to forward Amile Jefferson in a trade with the Iowa Wolves. 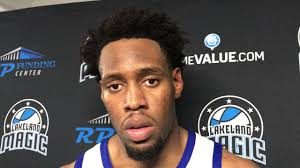 Onwukamuche was selected in the 6th round in the 2015 NBA D-League Draft by the Bakersfield Jam. The following year he played with the Rio Grande Valley Vipers before being traded to the Erie BayHawks. He returned to the Lakeland Magic in 2017 as a returning rights player shooting 43.5 percent from the field and averaging 3.3 blocks per game.

Onwukamuche played two collegiate seasons at Prairie View A&M after transferring from Lone Star College. He was named SWAC’s Defensive Player of the Year and named to All-SWAC Second Team for his senior season. Onwukamuche averaged 6.4 points, 5.4 rebounds, and 1.73 blocks per game as a senior in 2014-15.

The Magic continue their road trip Saturday, February 29 against the Grand Rapids Drive. Tip-off at the DeltaPlex Arena is set for 7:00 pm. The game will be available on NBAGLeague.com.

ABOUT THE LAKELAND MAGIC

The Lakeland Magic, based in Lakeland, Fla., are the NBA G League affiliate of the Orlando Magic. One of 28 teams in the NBA G League, the Magic completed the 2018-19 season with a 32-18 record, advancing to the Eastern Conference Finals. The Lakeland Magic schedule consists of 50 regular-season games, with 24 home games at the RP Funding Center, plus a postseason. Flex plans and single-game tickets for the 2019-20 season are available by calling 863.825.3258 or visiting lakelandmagic.com. Stay up to date on all things Lakeland Magic by following @lakelandmagic on Instagram, Facebook and Twitter.