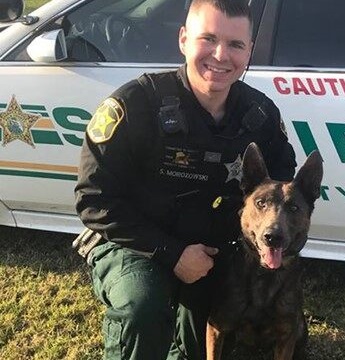 On February 15, 2020 at approximately 2:54 a.m., Polk County Sheriff’s Office Deputy Seth Morozowski   (28) was arrested by the Florida Highway Patrol for driving under the influence. Deputy Morozowski has been suspended with pay pending termination proceedings.

According to the FHP affidavit: at around 2:30 a.m., February 15, an FHP trooper pulled in behind Morozowski’s personally owned vehicle that was stopped on the outside shoulder on eastbound Interstate 4 approaching the N Kingsway Road overpass near Seffner. When the trooper came up to the vehicle and made contact, he detected a strong odor of alcohol emanating from the vehicle. When Morozowski exited the vehicle, he was observed as being unsteady, and he ultimately failed to satisfactorily perform several standardized field sobriety exercises.

Morozowski was arrested and transported to the Hillsborough County Jail, where his breath samples yielded results of .212 g/210L and .209 g/210L.

Morozowski is employed as a K-9 deputy sheriff and had been with the Sheriff’s Office for 9 years and 2 months. His salary is $56,099.