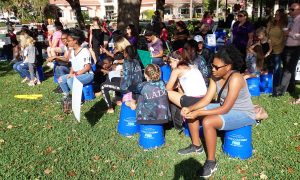 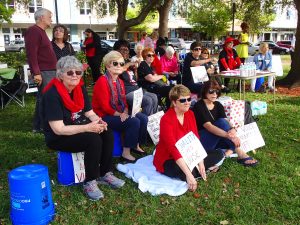 “In the middle of this madness, we will stand. I know there is a better world. Take your sisters & your brothers by the hand. Reach out to every woman & girl.”

This was one of the lyrics sung during a flash dance held in solidarity against domestic violence and abuse at Winter Haven on Saturday afternoon. 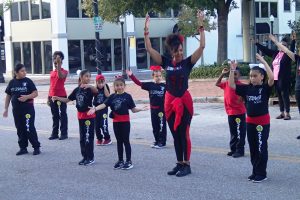 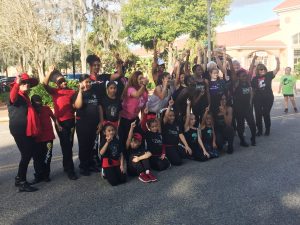 In Central Park, more than one hundred people of all ages congregated to show their support for domestic abuse victims and survivors and to take a stand against such oppression during the annual One Billion Rising demonstration. 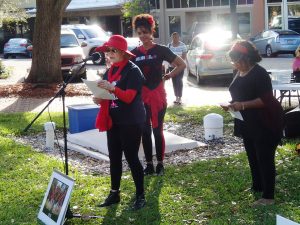 The big finale came at the very end when students from the different schools led demonstrators in a flash mob dance to One Billion Rise’s anthem, “Break The Chain”, written by Tena Clark and Tim Hertz.

“One Billion Rising is the biggest mass action to end violence against women (cisgender, transgender, and those who hold fluid identities that are subject to gender-based violence) in human history,” the organization’s website states. “The campaign, which launched on Valentine’s Day 2012, began as a call to action based on the staggering statistic that 1 in 3 women on the planet will be beaten or raped during her lifetime.”

Bernie Warren started the Polk County division in 2014. Since then, the annual protest has grown significantly within the Winter Haven community. Each annual celebration includes a week of events through the county, including a student art exhibition at Polk State College and a performance by The Vagina Monologues at Theater Winter Haven.

This year’s weeklong event was the first time they raised money for a local initiative, the Red Tent Initiative, which helps assists the victims of abuse and exploitation. More than $4,000 was raised at the performance of the Monologues, and another $500 was raised during a fundraiser at Jensen’s Bar, Warren said.

“We are very proud of the impact we are able to make this year,” Warren said. “we need to build awareness because the statistic [for abuse and violence against women] is so horrific, we need to take a stand and make people aware…We love the camraderie with other women and other children, and we want to make the future better for this young ones.”

Janet Gomez led the students from Bethune Cookman during the dance. She and her students have been practicing their routine twice a week since January. Even with less than six weeks to practice, they managed to perform their dance well, she said.

Gomez loves the camraderie of the event, but she also loves being able to spread awareness about an important issue such as violence against women and children.

“I think the more and more we bring awareness to the community, to the population at large, the better it is to be informed,” she said. “This is something happening everywhere, not just Winter Haven or Lakeland, it is happening global. So I am glad it is getting the attention it deserves.” 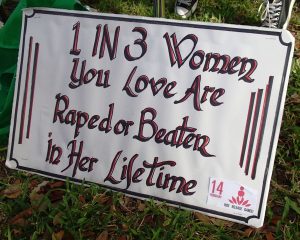