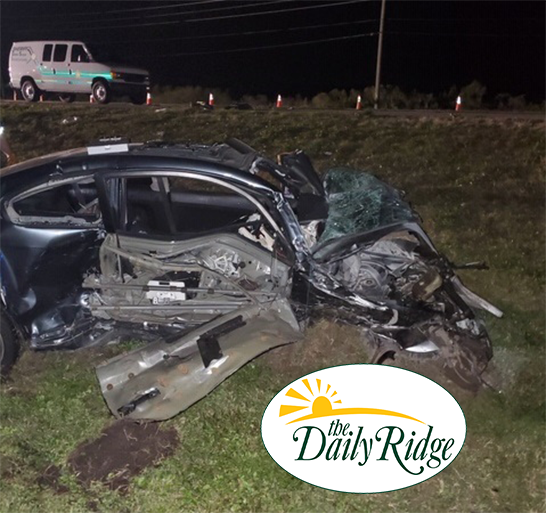 Investigators learned a white 2018 Chevrolet Malibu being driven by Radashia Johnson of Lake Wales was traveling North in the inside lane on Highway 27. A white 2015 Ford F-350 pickup truck being driven by Rene Peralta of Kissimmee was also traveling North in the middle lane of Highway 27 just behind the Malibu. As the Ford and the Malibu reached Tower Lakes Boulevard a third vehicle, a grey 2006 Toyota Scion, was traveling South on Highway 27 at what witnesses described as a higher than normal speed. The driver of the Toyota then attempted to make a left turn at the entrance to Tower Lakes in front of the other two vehicles.

The Malibu struck the Scion on the right rear causing it to turn head on into the Ford where it sustained a second impact. The Toyota traveled North across all three lanes coming to rest on the shoulder of the East side of the roadway.

The Scion had two occupants and at this time it is unknown which of them was the driver. One occupant of the Scion was identified as Natali Jane Moreno a 20 year old Lake Wales resident. She sustained life threatening injuries and was transported to Advent Health in Lake Wales where she was later pronounced deceased. The second occupant was identified as Bryshon Johnson, a 22 year old Winter Haven resident. Bryshon also sustained serious injuries and was airlifted to Lakeland Regional Health. He is expected to recover from his injuries.

Radashia Johnson, the driver of the Malibu, is a 27 year old Lake Wales resident along with his two children were transported to Advent Health in Lake Wales with minor injuries.

A passenger in the Ford F-350, identified as Josefa Peralta a 67 year old Kissimmee resident, was transported by ambulance to Celebration Hospital for minor injuries. No other injuries were reported.

The Northbound lanes of Highway 27 were effected for several hours as a result of the crash.

This is an ongoing investigation. If you have any information regarding this crash please contact Traffic Officer Sean Robertson or Traffic Officer Andrew Elrod at the Lake Wales Police Department at 863-678-4223.