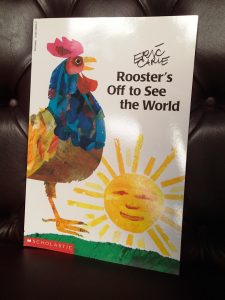 Once upon a time, there was a rooster. He wanted to take a trip around the world. Along the way, he befriended other animals including birds, frogs, and fish who decided to join him.

Unfortunately, the rooster soon realized that he had not prepared for his journey around the world. He forgot to bring food or water or shelter. So one by one, his new friends left to return home.

Later that evening, he fell asleep and dreamed that he did, indeed take a trip around the world. He may not have made the journey in real life, but he did so in his dreams.

U.S. Army Reserve Captain Alexander Vacha read this story to preschool students at the Lake Wales Family YMCA shortly after arriving home from his military tour in the Middle East. 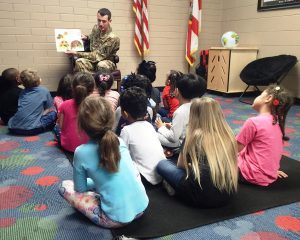 Dressed in his army uniform, Cap. Vacha arrived at the YMCA on Wednesday morning to read the book, “Rooster’s Off to See the World”, by Eric Carle. The reading session helped kick off the YMCA’s participation within the statewide 2020 Celebrate Literacy Week.

Cap. Vacha read the story to more than a dozen curious preschool-aged children, all of whom had more than their fair share of questions, ranging from what is his favorite thing to do in the world to whether or not he ever performed a loop-de-loop in a helicopter. (The answers to both questions are “reading” and “no.”)

He chose the book he read that morning because the experience of the main character reflected his own feelings when traveling abroad in the military. He, too, also wanted to see the world, but he also loved returning home after his travels abroad.

“When we [my troop] came back after being away for nine months, [we realized] how great it is to be home, live in Florida, live in this wonderful state with our family and friends,” he said. “So I wanted to share this book with you because it is a lot like that. So you guys get to go into all the world, bring whoever you like with you, have fun, but remember that you always have your home to come home to and your family and friends here.”

Cap. Vacha enlisted in the United States Army Reserve as a UH60 Black Hawk pilot. He had been assigned to G Company, 5th battalion of the 159th Aviation Regiment in Clearwater. He had been deployed twice during his military career: once to Kosovo in 2014, and again to Iran.

“It wasn’t safe serving his country over 6,800 miles away,” a press release about him stated. “He was deployed to the Anbar Province in Iraq last February logging 126 combat flight hours, completing 27 MEDEVAC missions. Six days after returning from the Anbar Province the news broke that his base, Al Asad had been bombed.”

Cap. Vacha grew up in Indian Rocks Beach. He later attended and graduated from Embry Riddle Aeronautical University in Daytona Beach. Now that he has returned from the military, he plans on returning to his old position at the Winter Haven Airport and working there fulltime.

Having recently returned to America after spending nearly a year abroad, Cap. Vacha is still getting reacquainted to civilian life. Most everyday tasks that ordinary people take for granted he is now starting to do again for the first time in a long time, he said.

As a certified teacher, Cap. Vacha has been trained to educate children. Even then, this was the first time in a long time that he had been able to read and interact with children like this on a personal level, he said. 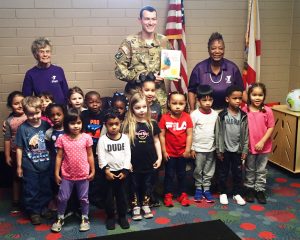 “So when I had this opportunity placed in front of me, I was absolutely pleased,” he said. “I haven’t been in a classroom for a few years, and I was excited about the opportunity to get in front of students. That is one of my passions, and today it was an amazing day to get involved with the students.”

Dr. Marc Hutek, CEO of the Early Learning Coalition of Polk County, who helped organize this special reading session,expressed his gratitude of having a member of the armed forces reading to children that morning.

“We’re so glad to be able to have such an outstanding individual take time out to come and read to our children,” he was quoted as saying in a press release. “Captain Vacha is a great example of a true American hero.”

Renee Camper, YMCA Executive Branch Director, also expressed her gratitude for the Captain taking time during his leave to spend time with local children, especially since many of their parents are also service members.

“He did a great job,” she said. “We support our heroes…We liked that he shared his story and his traveling around the world, his experience in the Air Force and that he did come back home. That touched a lot of them.”