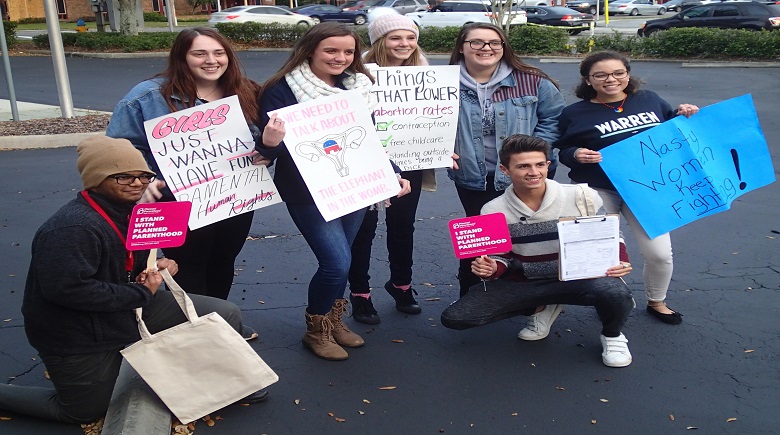 Several years ago, a 15-year-old Hispanic girl entered the clinic of Kathy Sullivan, who was working there as an OB/GYN. The girl had been raped while illegally crossing the border, and she had become pregnant from the ordeal.

The girl was staying with her brother. She feared that he would beat her and perhaps even kill her if he learned she was pregnant. Alone and afraid in a foreign country, the girl did not know what to do.

Sullivan attended to the girl and her needs. She was 24-weeks pregnant, and after testing, she was discovered to have contracted syphilis from her rape. The disease would create neuro-degeneration for her unborn child, which would lead to potential medical complications and birth defects.

The two of them deliberated their options, and the young girl made her choice. She would terminate her pregnancy. It was one of the very first terminations Sullivan ever practiced during her 34 years practicing women’s health.

Sullivan knows from such experiences that the decision to have an abortion is not one that women make lightly. Often, it is a very difficult decision for them to make, especially when their life and the life of their unborn child is on the line.

“This is the real-life situations that doctors see practicing medicine,” she said. “So nobody [considers an abortion] without thought or courage or making [tough] decision and choices. We need to have a choice when it comes to women’s health.” 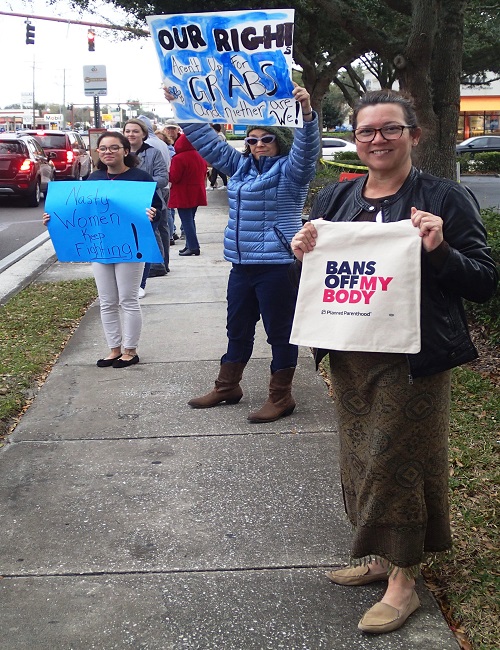 Far from being used as a form of birth control, abortions are rarely considered because the woman no longer wants to have the child–and they most certainly do not choose it lightly after carrying the child to full-term, as Sullivan said. From her own experience, many women are forced to choose it due to potential health risks for the mother and child.

“The reason they do [have abortions] is heartbreaking because the baby has been found to have something that would be incompatible with life or the woman is in threat of her own life,” she said. “But when our health system makes it difficult for them to get birth control, it is asking for errors.”

Sullivan was one of nearly two dozen protesters who arrived to show their support for women’s reproductive rights during the Reproductive Rights Rally on Wednesday afternoon.

These protesters gathered outside the Southgate Publix Shopping Center where they waved signs along the sidewalk of South Florida Avenue. They were greeted with supportive horn honks as they carried signs with slogans such as “my body, my choice” or “hands off my body” and shouted “What do we want? Choice. When do we want it? Always.”

Since the ruling nearly half a century ago, the overall number of abortions has decreased. Abortion rates have since reached an all-time low, having “dropped to 13.5 abortions per 1,000 women aged 15–44” as of 2017, as reported by the New York Times. 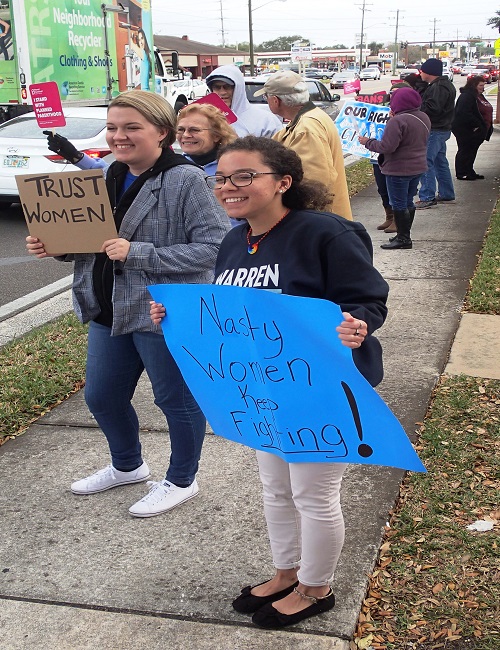 However, in spite of the overall decline in abortions, the court ruling of Roe v Wade has experienced several challenges through additional restrictions on abortion on the state and local level.

Currently, the Supreme Court will be considering another court case, June Medical Services v. Gee, which addresses a Louisiana law that “requiring abortion providers to have admitting privileges at a local hospital”, as Vox reports. Many “women’s choice” advocates fear this case will effectively and virtually overturn the Roe v. Wade ruling.

Here in Florida, the State Senate is considering a bill that would require parental consent for teenage girls to receive an abortion. The bill is being sponsored by Kelli Stargel, R-Lakeland, who insists that “parents need to be involved in minors’ decisions about having abortions”, according to the Sun-Sentinel. 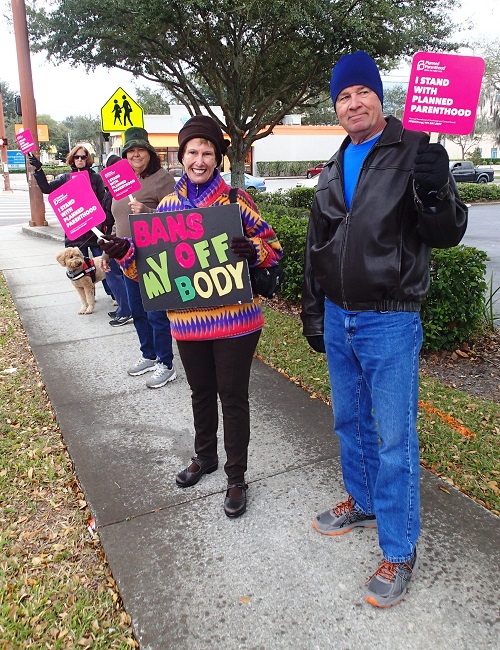 However, many of the protesters from Wednesday’s rally oppose the bill, as they consider it an unnecessary intrusion into a woman’s personal healthcare decisions.

Natalie Alex, an unaffiliated volunteer and activist, argued that most young women in those situations already receive consulting from their parents, and that the bill would create an “unnecessary layer” to the process. Furthermore, she argued that many young girls have been molested or raped by members of their own family, which would compound matters of consent.

“Sexual assault is a big issue and big barrier to people seeking services already, and when you add another layer, then you certainly pose a detriment to that,” she said. “We believe women have the right to make their own decision, and that their healthcare should be legal, safe, and affordable. We are here to say that the [Roe v. Wade court] ruling needs to stand and it needs to be supported by state, local, and federal government officials.”

Cathy Robinson, a member of Friends Together, an advocacy group for women’s health, claims that the fight for “women’s reproductive rights” is more than for their right to choose an abortion. It is about having affordable and reliable access to birth control, cancer screenings, and menstruation products such as tampons and sanitary pads.

Though the weather dropped below ideal Florida weather, requiring many attendees to dress in winter clothing and heavy jackets, more than enough women and their allies came out to show their support for women’s rights, Robinson said.

“Anytime it gets cold in Florida, you can expect your crowds to decrease in size, but that doesn’t mean it decreases in enthusiasm,” she said. “Anytime you have an event in the middle of the work week, you will have a small crowd, but things are picking up and people are still coming.” 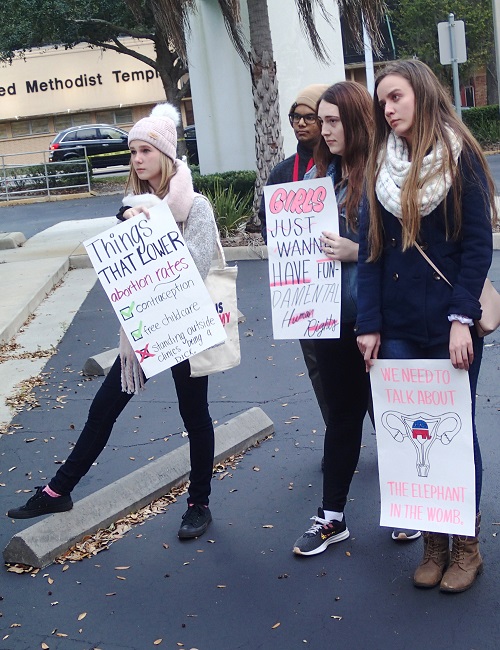 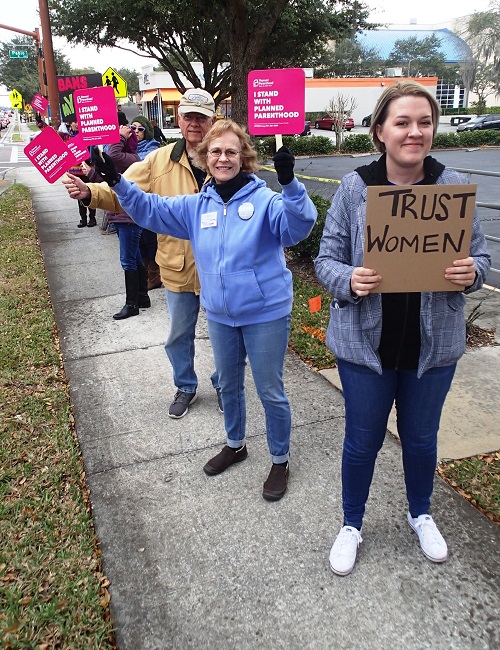