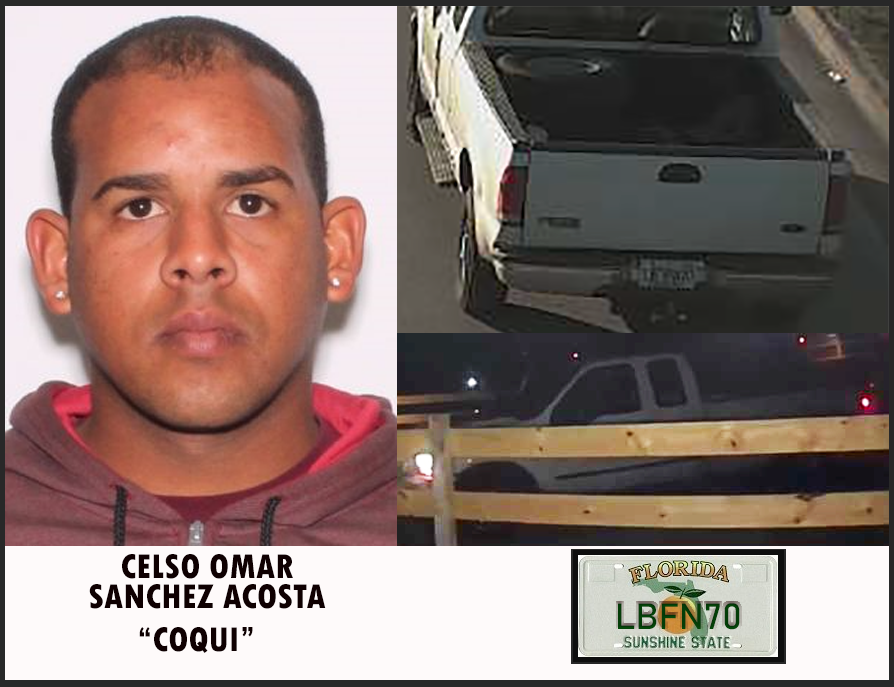 The Polk County Sheriff’s Office is investigating the murder of 24-year-old Henry Fernandez-Soto of Lakeland, who was shot Wednesday evening, January 8, 2019, at 1735 Oakland Road East in Lakeland. Deputies are currently trying to find the shooter, who has been identified as Celso Omar Sanchez Acosta, also known as, “Coqui.”

The PCSO Emergency Communications Center (ECC) received a 911 call at 7:11 p.m., with a report of a person being shot.

When deputies arrived on scene, they found Fernandez-Soto behind a residence with a gunshot wound to his chest. Fernandez-Soto was transported to Lakeland Regional Health Medical Center. He died at 5:34 a.m. this morning, January 9, 2020.

A warrant for 1st Degree Murder has been obtained for Sanchez Acosta, and deputies continue to search for the 29-year-old Lakeland man, who may be driving a white 1999 Ford F250 (FL Tag: LBFN70).

“While this was not a random shooting, we need to find and lock-up Sanchez Acosta as soon as possible. He’s armed, and should be considered dangerous. We ask that if anyone knows where Sanchez Acosta is, let us know. Call usor call Crime Stoppers at 1-800-226-TIPS.” – Grady Judd, Sheriff.

According to Fernandez-Soto’s girlfriend, the couple drove to the residence to pick up some horse-riding equipment from Sanchez Acosta. The men were meeting at the location, but neither man resides there.

The woman told detectives that while she waited in the car, she heard gunshots and watched as Sanchez Acosta was running after Fernandez-Soto and pointing a gun at him.

She went on to tell the detectives that the two men had an ongoing dispute regarding an alleged theft of a horse. She said that Fernandez-Soto told her recently that Sanchez Acosta had verbally threatened him and mentioned a rifle.