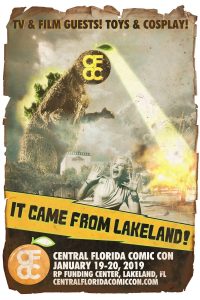 Do you like television shows like “Mighty Morphin Power Rangers”, “The Walking Dead”, or “RWBY”! Would you like to meet some of the big stars from these shows? Then visit Central Florida Comic Con in Lakeland on January 19 and 20.

For two days, this annual convention will allow fans of all things geekdom to celebrate their love of comic books, video games, and television shows with exhibits, discussion panels, and costume contests.

Attending this year’s event are more than 22 special celebrity guests from movies, television, animation, and comic books. This year’s guests include:

Hosted at the RP Funding Center in Lakeland, this local convention has been growing strong for the past several years. This year’s event proves to be even larger with more guests and booths than last year, explained Ben Penrod, the promoter of CFCC.

Since age 13, Penrod has read and loved comic books. He started selling comic books at conventions across the country, and soon started running his own conventions. He started one in Lakeland as to allow an opportunity to provide such an event in a locale away from the big cities of Tampa and Orlando, he said.

Such a local focus has allowed the convention to remain as popular and successful as it has been, and to grow as large as it has since become, he said.

“It is a local event geared towards more local people,” he said. “It is more geared toward people who want a more intimate experience than waiting in a line all day.”

His favorite part is being able to meet many artists with the row of vendors known as “artist’s alley.” To be able to see so many people with a love and passion that he shares makes hosting the event worthwhile.

“We had a lot of enthusiasm from the people this year,” he said. “Everyone is so enthusiastic for it, everybody loves coming out, it is a great family event.”