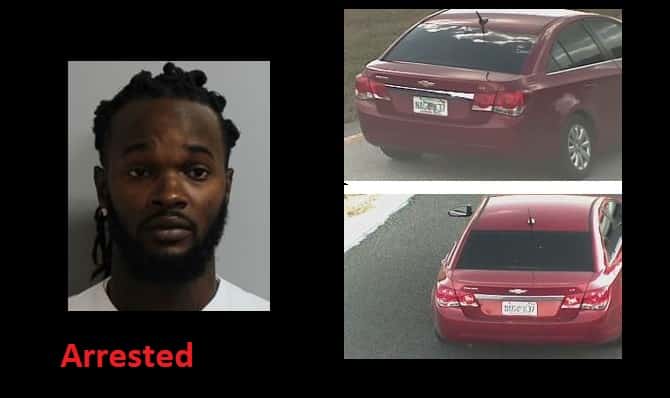 On Saturday, October 12, 2019, the Atlanta Police Department arrested 30-year-old Taiwan Blandin of Frostproof for Carjacking, Escape, Aggravated Assault, Possession of a Firearm by a Convicted Felon, Fleeing to Elude, and other charges, and he was booked into the Fulton County Jail.

According to preliminary information from Atlanta P.D., Blandin committed a carjacking around 2:30 a.m. at a convenience store. Atlanta Police officers spotted the stolen vehicle (a Honda) shortly after it was BOLO’ed in the area. When they attempted a traffic stop, Blandin fled, and was apprehended after he crashed the stolen car and attempted to flee on foot. He was also Tased while resisting arrest. There was a white female passenger in the car with him, and she was also arrested. I don’t have any information about her but she is not the carjacking victim, she is a co-defendant from Atlanta. From within the stolen car, Atlanta P.D. recovered gloves and a handgun. That evidence is being processed.

PCSO was notified of his arrest, and our homicide detectives responded to Fulton County to interview Blandin. He is not speaking to our detectives. He is being held in the Fulton County Jail and will be transported back to Polk at a later date.

“We are grateful that this violent, armed, and dangerous suspect is in custody and his crime spree has come to an end. The Atlanta Police Department did an awesome job. Based on the felonies he’s racked up, he likely won’t spend another day on the street. He’s behind bars where he belongs.” – Grady Judd, Sheriff