When Amanda Jo Nicholson took to the stage at the Ritz Theater in Winter Haven, her performance on Thursday evening started out sweet as she held a giant lollipop and lip–synced to Shirley Temple’s “Good Ship Lollipop.” 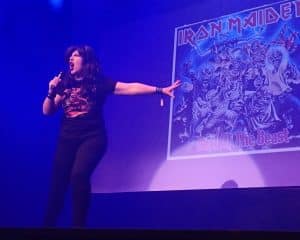 Her appearance quickly turned spicy as she tossed her prop asideand put on a wild hairstyle wig and Iron Maiden T-shirt, belting out lyrics from one of the band’s titular songs.

Aside from being the Vice President of Member Services at the Winter Haven Chamber of Commerce, Nicholson has also been an Iron Maiden fan since the early 1980s. She loves music from that time period and the late 1970s, and her two performances showed.

Her second performance had her don a police officer uniform as her friends dressed up as the remaining Village People, leading the audience in the lyrics and dance to their famous song “Y.M.C.A.” 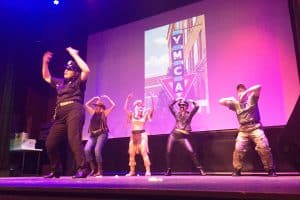 While initially nervous to perform, Nicholson enjoyed being able to participate that evening. Her participation inevitably paid off, as she won the People’s Choice and Judge’s Second Place for the Fourth Annual Celebrity Lip Sync Battle.

Nicholson was one of six other local figures who participated during that evening’s musical contest, hosted Thursday evening at the Ritz Theater in Downtown Winter Haven. Each contestant had two performances to lip–sync and dance to the songs of their choice.

Each of the participants was judged in two categories: People’s Choice, where the audience voted for their favorite performance, and Judge’s Choice, which was selected by a panel of three judges.

Nicholson won second place in the Judge’s Choice and won first place in the People’s choice. She also received a championship belt for having her performance raise $8,000. 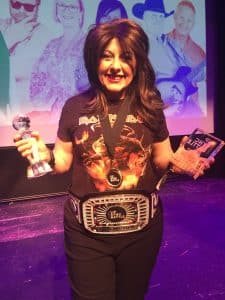 She loved being able to win and participate that evening. Most of all, as someone who has worked closely with the Cypress Junction Montessori School and The Public Education Partnership of Winter Haven, one of the recipients of that evening’s fundraiser, she appreciated being able to do her part to give back.

“I am so proud of the missions they both do,” she said. “I want to make sure that I did the chamber proud, and I am proud to work with the chamber of commerce here in Winter Haven and let nobody down.”

Winning the Judge’s First Place and Audience’s Favorite was Mark Voisard, Leader of the Cypress Gardens Water Ski Team. He was joined by members of his team on stage during their opening performance of “The Greatest Show” from the movie “Greatest Showman.”

Later that evening, Voisard appeared solo in his second act performing “Dude Looks Like A Lady” by Aerosmith. He took to the stage dressed as the cross-dressing Mrs. Doubtfire from the titular movie, rocking out on a broomstick like a guitar before getting into a steamy mishap in the kitchen. 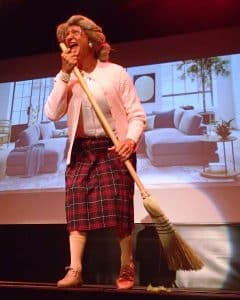 Voisard was inspired to participate that evening by his good friend, Audrey Netlow, while his two songs were suggested to him by his son, Travis. He loved being able to perform that evening, as well as to raise awareness and funds for good community causes.

“It is humbling because everybody is here for a reason, and that reason is to raise money for charity…and that is what it is all about,” he said.

Also participating that evening were:

• Qvonda Birdsong, Principal of Garner Elementary, who won third place for her performance of “Happy” by Pharrell Williams and “Respect” by Aretha Franklin.
• Curtis Romey, Principal of Cypress Junction Montessori, who performed “Born To Rock” by Bruce Springsteen and “Friends In Low Place” by Garth Brooks.
• Kim Hulverson, Vice President of BB&T Winter Haven, who performed “Power Of Love” by Huey Lewis and the News and “You Shook Me All Night Long” by AC/DC
• Brian Yates, of CenterState Bank Mortgage, who performed “Take You There” by Sean Kingston and “Shake It Off” by Taylor Swift. 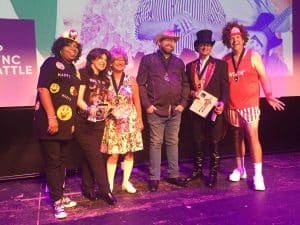 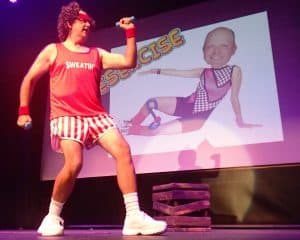 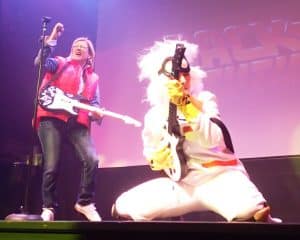 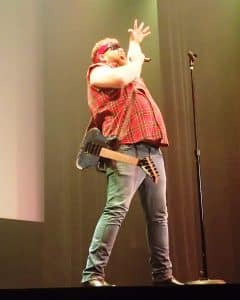 The Celebrity Lip Sync Battle serves as an annual fundraiser for public education, specifically for both the Cypress Junction Montessori School and The Public Education Partnership of Winter Haven. This year’s event raised more than $32,000.

Karen Winningham, Executive Director of Cypress Junction Montessori School, was pleased by the turnout that evening and by how much the event has evolved since it first started four years ago. Last year, it was hosted at the Chain of Lake Complex, and this year, it was hosted in the much larger venue of the Ritz Theater.

“It is about backing public education,” she said. “I love the community feel, just getting behind the children and dedicating themselves to educating our students…The sky is the limit, it is going to be great next year. It exceeded expectations, it was a great evening with a lot of fun.” 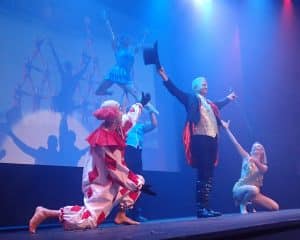