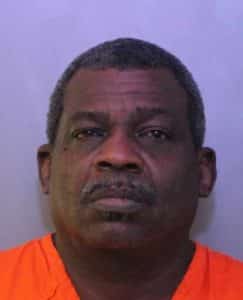 This morning (9-28-19) at approximately 3:53 a.m., an officer with the Winter Haven Police Department spotted a van matching the description of the one used along Lake Elbert Drive on 9-26-19 involving the driver trying to get a 15 year-old to get in the van. The van was entering a parking space at the Racetrac station located at 934 Havendale Blvd. in Winter Haven.

Officer Gavin Doyle recognized the van and made contact with the driver, 55 year-old Randall Ogletree (Parker Lane, Winter Haven) as he exited the vehicle. Ogletree gave his name to the officer and it was discovered that Ogletree had an expired driver’s license as well as a warrant for Failure To Appear on a charge of driving with an expired license. The tag number to the 1997 white Dodge van was similar to the one the witness gave at Lake Elbert. (Two digits were reversed). Ogletree was taken into custody for the warrant and an additional charge of driving with an expired license.

Based on the Be On The Lookout that was distributed regarding the incident, Ogletree was interviewed at the police department where he admitted that he was driving along Lake Elbert on 9-26-19 and offered a female a ride. He indicated he thought the female was an adult because it appeared she was coming from “Polk” (meaning Polk State College). He also told detectives that he always asks females he sees walking if they need a ride.

Based on the two witness accounts of the incident involving the van following the 15 year old, Ogletree was charged with stalking.

Ogletree was booked into the Polk County Jail for one count of Stalking (F.S.S. 784.048) and Driving Without an Active Driver’s License (F.S.S. 322.03(1) along with the Failure To Appear.