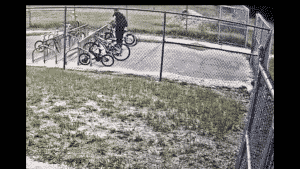 On Friday, 9-13-19 a young 9 year-old was ready to get on his bike to head home after school from Elbert Elementary when he got to the corral where bikes are kept and saw his bike was GONE! When video was viewed, a white male, approximately 6 ft tall is seen riding up on a bike (guess one bike isn’t enough) and he goes to the corral.
He walks in, selects the boy’s blue, white and black Kent 20″ Ambush BMX bike and left. He rides the stolen bike and drags the other alongside. Check out the video. Anyone who knows anything about this needs to turn this guy in.
Taking the bike from an elementary school? Tsk Tsk!
(BTW – the boy received the bike in May as his 9th birthday gift)