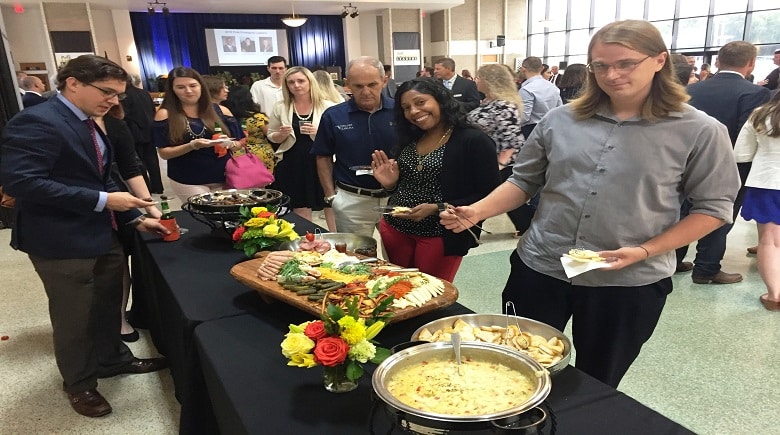 Two chamber directors, two lawyers, and a CEO were all recipients honored for their community leadership and participation during the 2019 Polk Emerging Leaders Awards on Thursday. 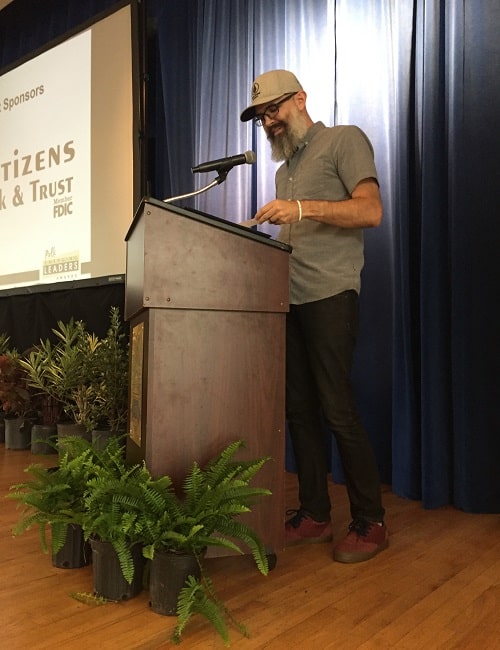 Hosted at the Bartow Civic Center, the awards are presented as a local collaborative effort by three young professional groups in Polk County, including Emerge Lakeland, Endeavour Winter Haven, and Engage Bartow, to recognize outstanding young professionals who make a difference in their communities. 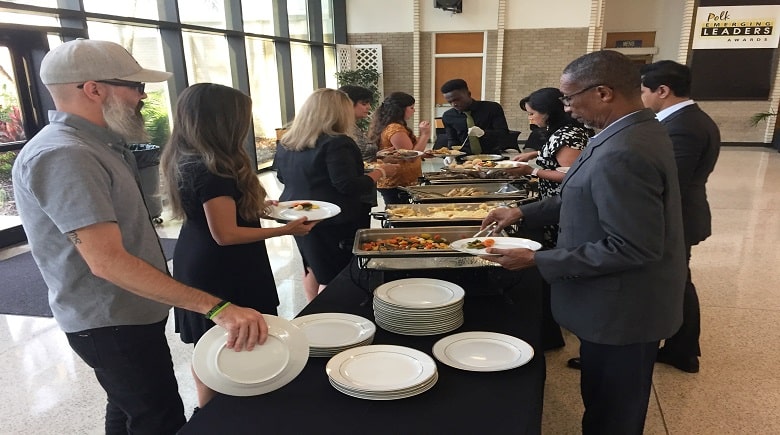 Prior to the awards ceremony, dinner was provided by Terrie Lobb Catering and cocktails were sponsored by Citizens Bank and Trust. Opening the presentation that evening was Brent Wernsing of Kairos Church offering an invocation. 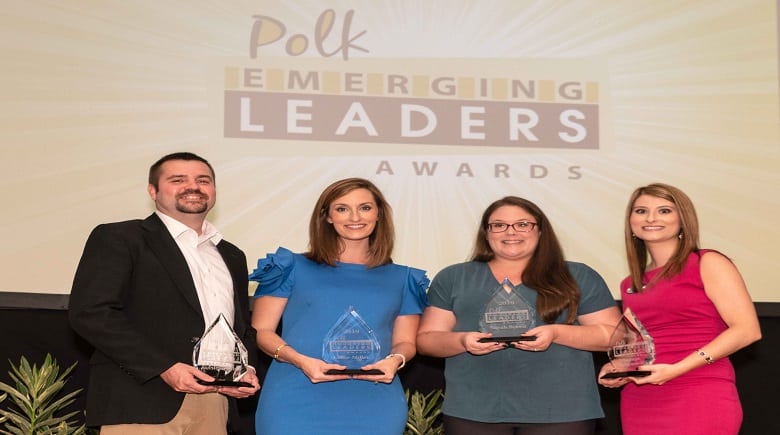 The five recipients honored that evening were as follows:

Callie Miller is the youngest and only female CEO within the Fortune 500 organization that she works for. She’s a businesswoman who has an open heart for helping her local community, and she has no interest in slowing down.

In 2012, she graduated from Liberty University with a Master’s in Business Administration. Her career started with her becoming the Director of Marketing and Business Development in the Union Hospital District in South Carolina. She later moved to Florida in 2015, where she became president of Life Share Management in Lakeland.

One of her shining moments was being able to help a gentleman with significant intellectual and developmental difficulties fulfill his dream of becoming a cowboy. She was able to arrange for him to obtain a fulltime position at a stable, where the owners agreed to teach him how to ride a horse.

She considers Lakeland one of the most philanthropic and generous communities she has ever lived in. There she engages in many local organizations including the Junior Leauge of Greater Lakeland, American Cancer Society, and Circle For Women with Lakeland Regional.

“What I came to find out upon moving to Lakeland was this community, you all, invited those very same characteristics [of my inspiring husband],” she said. “You are the most generous, the most beautiful, the most giving and available community, and it has been a tremendous privilege to call Lakeland my home now.”

In 2014, Eric Pospichal earned his Bachelor’s of Science in Business Administration from the University of South Florida. During his college career, he was a senior staff appraiser who grew his company’s aim and helped educate and train company appraisers.

He sincerely believes in his company’s mantra, “Make The Day”, and strives to live it through his own work. While working as a store manager at Finish Line, he enforced the spirit of this mantra to help turn it around for the better. What had once been a reluctant staff that resented their jobs soon became more productive and quickly grew to love their work.

When not attending to his work, and not spending quality time with his wife and 8-year-old daughter, he is striving to make a difference in his community. Through the Rotary Club in Auburndale, he has helped collect school supplies, raise funds for Alzheimer’s, and helped the construction of the Rotary Butterfly Garden.

Upon being called to accept his award, Pospichal struggled to find the words to speak. He was not prepared and he was fearful of speaking before other people unprepared. Nevertheless, he expressed his gratitude and humility in being a recipient.

“I am honored to be even mentioned in the same breath of the other nominees tonight. I am no more deserving to be a recipient than any of them are,” he said. “If an event like this can encourage one more person in this room to give back to the world…then this event is worth it.”

Sarah Breed graduated from Southeastern University with a Bachelor’s of Arts in English, and she is currently pursuing a Master’s of Business Administration. She has been working as a Director of Initiatives at the Lakeland Chamber of Commerce.

Through her position, she has helped to put forward many initiatives within her local community. She currently serves as a program director for Leadership of Lakeland, and she helped create a new initiative, Nod to Non-Profits, this initiative is designed to spread awareness about local non-profits.

Her proudest achievement has been the creation of The Longest Table, a new annual community event in Lakeland that drew in more than 1,000 local residents for an evening of conversation and dinner. This event she helped pull off in less than eight weeks’ time, said Christina Criser Jackson, from United Way of Central Florida, who presented Breed.

“Because of her dedication to quality, the people around her are more than willing to follow her example because they trust her and her example,” Jackson said. “She feels establishing trust is necessary to making sure the work gets done and gets done well.”

Breed herself expressed her appreciation of her local community, and how honored she was to receive this award for serving such a great community.

“I am just amazed at all of you, because I have not seen a community pull together like Lakeland does…like all of Polk County,” she said. “So this is very special to meet someone who has had the privilege to work with all of you.” 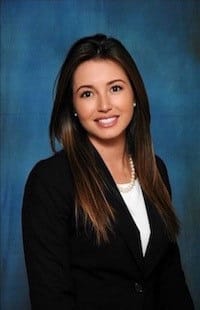 Before graduating from Stevenson University in 2016, Lauren Donalson worked as summer clerk for Peterson and Myers. Little did she know that the company where she worked her summer job would be the place where she would grow her career.

One of her most satisfying cases was helping a client whose otherwise good intentions helping a close friend placed him in hot water, potentially facing fines and jail time. Through her hard work, she was able to ask for leniency, and his case resulted in him merely needing to complete a divergent program.

“She felt a sense of accomplishment. It made her feel she truly made a difference,” said Dr. Angela Falconetti, from Polk State College, presenting Donalson.

Aside from making a difference through her clients’ cases, she also strives to make a difference in her local community. She works on multiple boards and committees, assisting with the Winter Haven Charity Challenge, Main Street Bartender Bash, Main Street Winter Haven, and Humane Society of Polk County.

Donalson was unable to accept the award that evening, as she was busy starting a new phase in her life by giving birth to her new baby boy. However, a video of her acceptance speech was played at the event.

“I want to thank the community, a community that since 2015 has embraced me, giving me the opportunity to join in different organizations and serve, and I am so honored to serve this community because of the love,” she said.

Kathryn Bevilacque-Ely graduated with her associate’s in science from Polk State College, and later received her Bachelor’s of Science from the University of South Florida.

Originally a campaign coordinator, and later an account executive until 2016, she currently serves as the director of the Bartow Chamber of Commerce, and last week was named the incoming executive director.

Through her position, she has helped create initiatives for the local community, including its most recent participation for Shop Small Polk, a coordinated effort for Shop Small Saturday, inspiring local residents to shop at local businesses.

Aside from the Chamber, she has been engaged throughout her local community through other organizations and efforts such as Emerge Serves, Engage Bartow, and Early Learning Coalition.

“As she grows in her own proffesional career, she wants to continue to reach down and help others reach their goals as well,” said Jeff Cox, Givewell Community Foundation, presenting her. “She knows that even if she has helped one person, she is successful.”

Though honored to receive the award, she was also very humble, reminding everyone that the reason she and the other recipients do what they do is not for themselves, but for others.

“Nothing we do is for the applause, but for the cause, we have a passion for what we do, and every nominee in this room is deserving of that honor,” she said. “So I want to thank you for what you do.” 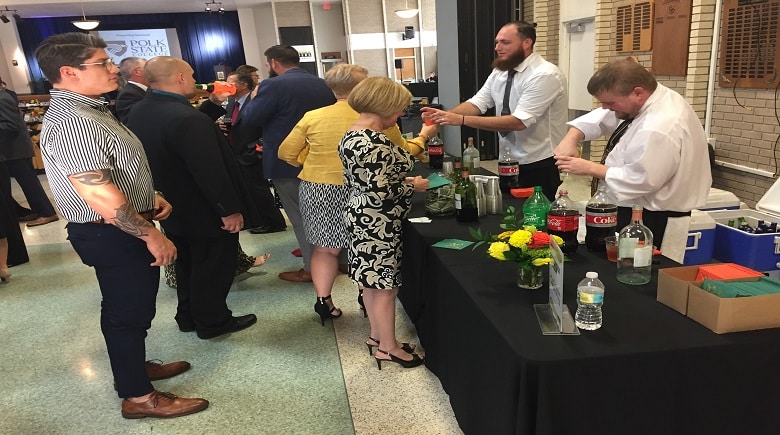