On Wednesday, August 7, 2019, the Polk County Sheriff’s Office Identity Theft Strike Force Unit arrested four Polk County suspects and charged three other suspects who live in Miami via warrant – all of them have been working together since January 2019 committing racketeering, money laundering, and fraud at Gap, Inc. stores in 15 different Florida counties, using stolen credit cards from Chase Bank customers.

The investigation began in March 2019 when the Southeast and the North Florida Organized Retail Crime Managers for Gap, Inc. contacted PCSO in relation to the fraudulent transactions. PCSO detectives were provided with and reviewed the video surveillance and electronic journals from Gap, Old Navy, Athleta, and Banana Republic stores in 15 different Florida counties, and identified six suspects. The suspects were buying merchandise at the stores with stolen and/or fraudulent Chase Bank credit cards, then returning the merchandise to different Gap, Inc. stores and receiving refunds on their own personal credit cards.

The statewide prosecutor for the Office of the Attorney General Ashley Moody will be prosecuting the suspects, who are being charged with racketeering, conspiracy to violate the racketeering act, money laundering, cheating/gross fraud, grand theft, and dealing in stolen property. PCSO detectives obtained arrest warrants for six suspects, and a 7th was identified and arrested on August 7th while the arrest warrants were being served.

“Since the beginning of the year, these felons worked together to steal victims’ credit card information and used those credit cards to steal from retail stores. The four suspects in Polk are also receiving government assistance. We thank the professionals at Gap, Inc. for working with us to fight this kind of crime and the Statewide Prosecutor’s Office for their strong support. Racketeering and money laundering are very serious felonies. We will hold these criminals accountable.”–Grady Judd, Sheriff

Attorney General Ashley Moody said, “Retail theft hurts all consumers, as businesses often must build these losses into their budgets and pass costs on to consumers. Thanks to the great work of the Polk County Sheriff’s Office and my statewide prosecutors, this organized retail crime ring is dismantled and the suspects will face justice. Criminals must know that fraud of any kind will not to be tolerated in our state, and I will continue to work with Florida’s great law enforcement agencies to investigate and prosecute criminals.”

The 67 stores that were hit are located in the following counties: Polk, Alachua, Broward, Duval, Hillsborough, Leon, Manatee, Martin, Miami-Dade, Orange, Osceola, Palm Beach, Pasco, Sarasota, and Seminole. There were 568 total fraudulent transactions, 15 of which occurred at the Old Navy store in Lakeland, Polk County. 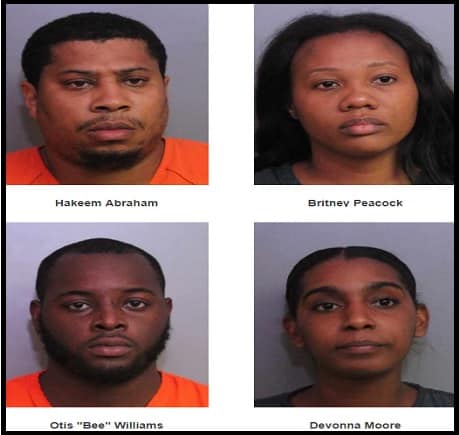 The four suspects living in Polk County are:

Hakeem Leonard Abraham, DOB 11/27/1989, of Terranova Drive in Winter Haven; he has 8 prior felonies and 11 prior misdemeanors, including armed robbery, grand theft, resisting arrest, soliciting a prostitute, burglary, criminal mischief, drug possession, and disorderly conduct. He works with all six suspects in Polk and Miami. He and his girlfriend Britney Peacock moved to Polk County from Miami about a year ago.

Otis Bernard “Bee” Williams IV, DOB 12/18/1996, of Emerald Avenue in Lake Wales; he has 10 prior felonies and 8 prior misdemeanors, including kidnapping, aggravated battery on a pregnant woman, sexual battery, assault, domestic violence, drug possession, grand theft, dealing in stolen property, and VOP. He is the owner of Designer Kuts Barber Shop located at 217 North 1st Street in Lake Wales. His live-in girlfriend is Devonna Moore.

Britney Peacock, DOB 4/9/1990, of Terranova Drive in Winter Haven. Her live-in boyfriend is Hakeem Abraham. When detectives arrived at Abraham’s house to serve his arrest warrant, Peacock was there and was recognized as the suspect seen on video surveillance committing crimes with him. She’s being charged with criminal conspiracy to violate racketeering act (F-1). She has 3 prior felonies and 3 prior misdemeanors, including aggravated assault with a deadly weapon, and battery domestic violence.

Abraham, Williams, and Moore were also arrested on August 7, 2019, and booked into the Polk County Jail. They have all been charged with:

The three suspects living in Miami are:

Jones has a Polk County warrant for his arrest, for:

Sha’quella Jewel Sykes, DOB 08/13/1992, of NW 77th Terrace in Miami; she has 14 prior charges, including trafficking in counterfeit devices, criminal use of personal ID, forgery, credit card fraud, resisting arrest, grand theft, possession of stolen credit card, and retail theft. She is currently on federal probation.

Pinckney and Sykes have Polk County warrants for their arrests, for:

Sheriff Grady Judd will brief the media at 10:00 a.m. on Thursday, August 8, 2019, about a statewide racketeering and money laundering investigation that resulted in seven (7) arrest warrants. Four of the seven suspects live in Polk County and have been arrested.

Detectives worked with Organized Retail Crime Managers for a major retail chain to identify the suspects responsible for 568 fraudulent transactions at 67 different stores in 15 Florida counties. There are 151 confirmed credit card victims in 15 different states. The total financial loss is $87,500.00.

The four Polk suspects are in the Polk County Jail and will have a first appearance hearing at 1:00 p.m. this afternoon. The three other suspects out-of-county have Polk County warrants for their arrests.