The dark-haired suspect in this crime has been identified as 52-year-old Muhammad Abdallah Hmeid of Tampa, and an arrest warrant has been obtained for him. Detectives are still trying to identify the woman and other man in the video.

Nearly $800Worth Of Honey Stolen From Struthers Honey In Lake Wales 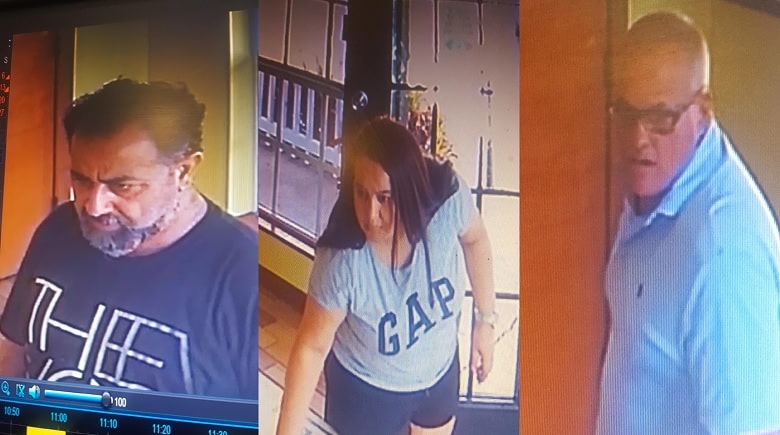 Struther’s Honey in Lake Wales needs your help in identifying three suspects who stole an estimated $800 worth of honey products earlier this month.

Located along State Road 60 on the outskirts of Lake Wales, this family-run business was the target of two acts of theft that occurred on July 6 and 7.

The first theft occurred on Saturday, July 6 around 10:30 a.m., when security video captured footage of a man and woman grabbing several jars of honey, taking it back to their vehicle, and returning to the store twice to take more jars.

A similar incident occurred the next day on Sunday, July 7 around the same time. Security video captured footage of a man doing the exact same thing as the previous couple: entering the store, stealing several jars of honey, and taking them back to his vehicle.

As Struther’s Honey operates on the honor system, customers come in, take what they need, and leave the money in a jar on the counter, explained owner Alden Struthers.

The three culprits had allegedly placed what appeared to be dollar bills into the money jar, but Struthers explained that the amount did not match what they had taken from the store.

An estimated $450 worth of honey and honey products had been stolen collectively during both incidents. Struthers believes that all three culprits are related, as the man from the theft on Sunday looks nearly identical to the man from Saturday, Struthers explained.

Struthers has already filed a report with the local police, and he has been informed that at least one of the culprits from the video may have been potentially identified. Nevertheless, he is asking the community to help identify all three and help bring them to justice.

Struthers’s Honey has been operating since 1935. The store sells locally-grown honey and honey products, along with other honey memorabilia.

Since his grandfather first opened the store, Struthers and his family have been running it on the honor system. Customers can take what they want and pay into the money jar on the counter.

“That is how it works,” he said. “A lot of people don’t believe we still have it here…Most people are honest when they come in, but once in a while, you have somebody take a jar.”

Prior to this recent string of robberies, the only known act of theft occurred only two months ago. Since then, security cameras have been installed to prevent and deter further acts of theft.

“Our customers are good customers,” he said. “If you have a bad apple, you take it out of the bag. Hate to do something like this for a couple of bad people when we have so many good people who come here.”

Any information about the thefts and the culprits involved should be reported to the Lake Wales Police Department by calling 863-678-4223.