With fabrics that are royal purple, golden brown, and jungle green, the African-inspired clothing created by fashion designer Patricia Sholtz appears fine enough to be worn by African royalty.

As a woman proud of her African-American heritage, Patricia gleans inspiration from African prints and fabrics. What she creates is a fashion line of garments fit for any African prince—even T’Challa of Wakanda himself!

“I love the African prints,” she said. “They are styles that I like, and I like what I see. I am inspired by the prints. When I see a print, I get an idea of what I am going to do with [it].”

Patricia has been designing her own clothes ever since she finished school in Miami-Dade in 1977. Since then, she has been creating her own fashion line, both through her own designs and those custom made for clients, out of her self-run business, PatriciAnn, in Sebring.

She showcased some of her African-inspired items, along with her bridal line, during a fashion show on Saturday evening, hosted by the Grant Career & Technical Education (GCTE) Center at the Winter Haven Cultural and Recreational Center. 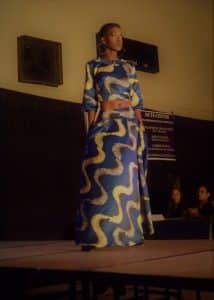 Patricia was invited to attend the event by the educational director, Tanzania Grant, after attending a job fair at the recreational center. Through the event, she had learned about GCTE and what they do for the community, and quickly became interested in working with them through their show.

“My expectations are to get my name out there, to just build a clientele from this area,” she said. “I am very grateful for them for this opportunity to be able to present some of my clothing.”

Patricia was one of nearly a dozen local fashion designers who had the opportunity to have their clothing modeled along the runway at the fashion show on Saturday. 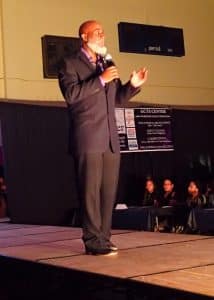 This was the very first show to be hosted by the GCTE Center, a local non-profit organization whose mission, according to its website, is to “prepare and support high school students with academic excellence, spiritual and character development which supersedes high school graduation requirement and standards.”

The fashion show served as a fundraiser for the GCTE Center, with the proceeds being raised to fund student scholarships and free education for its students, explained Anthony Grant, Senior Chair and CEO.

“The key thing is, if we can raise enough money that the kids who don’t meet the scholarships out there…we can personally give a scholarship so they can attend their school,” he said.

Helping out with the show that evening were many of the GCTE students, who helped with every aspect of the show from the lighting and stage construction, to the hair and makeup. Many even modeled the clothes showcased at the show, said Tanzania Grant, Educational Director. The GCTE Center, a non-profit funded primarily through private donors and sponsors, and accredited through the National Association for Private Schools, offers more than 108 different career and vocational courses, as well as training for OSHA, CPR, and first aid, to help prepare students for their future careers.

The school plans on hosting another fashion show later in December at the Lakeland Magic arena and facilitated primarily by the students. As such, last week’s show offered them the opportunity to see firsthand how to put on such as show, Tanzania Grant said.

“So this gives students opportunity to see what the professionals do,” she said. “This gives them that introduction to what is in the real world, to let them be introduced to different careers, and to know what to look forward to after they graduate from high school. If they want to be in the industry for hair or makeup, it gives them that introduction to see whether they like it or not and if they can take advantage of any other careers that the school offers.” 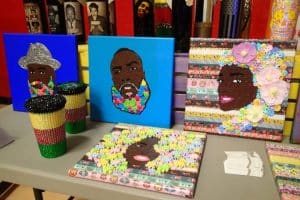