There are three things that Patrick Renney, guitarist for the Polk County Porch Pickers, loves: drinks, smokes, and having a good time. In fact, he loves all that so much that he even wrote a song about it.

Both him and his drummer, Tommy Shockley, who form the Tom Trick Duo, performed that song for an audience of other people who love to drink, smoke, and have a good time during the second annual Country Music Fest at Old Man Franks on Saturday afternoon.

For the second year, Renney attended the small musical gathering at the local oyster bar located near Lake Shipp in Winter Haven, where he and several other local bands and artists performed for resturant guests and passing boaters.

Renney loves Old Man Franks. He loves the beer, but he especially loves the music. He and his band performs there at least once a month. Being able to attend this event for the second year allowed him to share his mutual love for music with others, he said.

“We love the music,” he said. “Everybody playing here has been awesome. There is a lot of talent here in Polk County, and you can’t beat it. It is the best around. I think it is doing its job for sure.”

Brian Sears and his band mates from Yep! also attended the event that afternoon. Though they did not perform that day, they did take the opportunity to enjoy and listen to other music.

He and his bandmates have performed all throughout the state since starting in 2001, having played in Kissimmee, St. Cloud, Orlando, and Clermont. They are even planning on performing as the opening act for Pearl Jam at an upcoming concert.

As for Old Man Franks, the only thing that he loves more than the beer and the shrimp is the music. Like the other musicians who perform there, it is a love that they share with others. 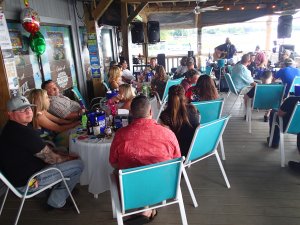 “Everybody believes in music,” he said. “We live on music. When you turn your radio on every morning. We listen to it on our way home. We listen to music. Music is what makes us go around.”

Old Man Franks first opened in 1954. Since then, the local oyster bar has served multiple generations of locals and seasonal residents. With the establishment located right on the lakefront, guests have easy access to the water, where they can dock their boats or watch as other boats float on by.

“We always pride ourselves being a small town place with a Key West atmosphere where you can always have the perfect getaway right around the corner,” said manager Jesse Hadsock.

This was the second year the bar hosted its annual music fest. In keeping with its small town feel, their event hosts only local bands and musicians. Not much changed since last year, which has only allowed the event to be as good as it was last year, Hadsock said.

“We try to keep everything the same, we just want to keep going with the same feel we always have, where everybody from the local community will feel welcome and enjoy what it is to be a Central Florida resident and live on the Chain of Lakes,” he said.

Hadsock hopes to continue moving the event forward into the future, and drawing in more local musicians and attendees to enjoy good local music. When it comes to turnout, it’s not about the size, but the overall vibe.

“As long as I look around and see a lot of smiling faces, then I say expectations are met,” he said. “We always like to have good live music, and I want an all-day event, and country music is kind of the thing that is keeping us together right now. There is a lot of positive vibes in that that other genres are not offering right now. If there is any inspiration at all, that would be it.”