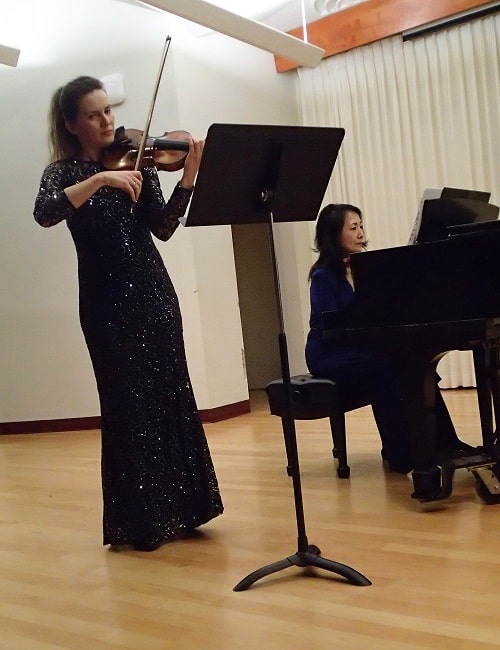 For the past eight years, violinist Rimma Bergeron-Langlois has been performing alongside Keiko Ohnunki Andrews, and their years of music experience culminated upon the stage at Florida Southern College on Wednesday during their recital, “Spirit Of The Violin.” 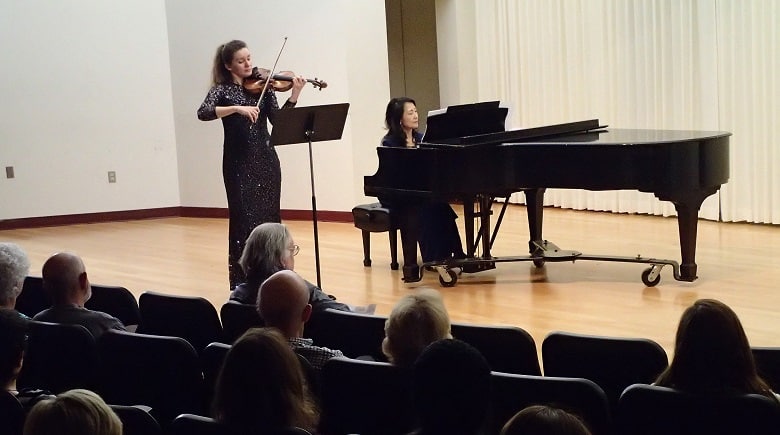 The duo drew in a crowd of more than 50 audience members within the Anne MacGregor Jenkins Recital Hall, where they entertained their guests with four performances of classical and contemporary selections.

Having performed together for nearly a decade, the two have learned to play their instruments off one another’s most masterfully, as each one’s performance accentuates the raw emotions of the other’s.

“We love playing together,” Bergeron-Langlois said. “We love the audience. They were so warm. We feel so welcome here with the students and the community.”

One musical piece proved especially difficult for Ohnunki Andrews to play, especially due to its background and subject matter, yet playing it alongside her longtime friend proved quite cathartic.

That particular, “Sonata For Violin And Piano in A-Minor, Opus 105”, was composed by Robert Schummann only five years prior to his passing.

Schummann had written the piece when he was struggling with mental and emotional turmoil, which inevitably caused him to attempt suicide three years later by throwing himself into the Rhine River, and which had him institutionalized for the remainder of his life, Ohnunki Andrews said.

Because of the subject matter behind the piece, as well as the unsettling feeling created through the music, especially the third movement, Ohnunki Andrews said she felt at odds performing it, but her friend, Bergeron-Langlois, encouraged her to continue on.

The other three musical pieces proved to be much more lighthearted. They had opened their performance with “Sonata Opus 100” by Antonin Dvorak, a Bohemian composer who resided within New York City for ten years, and whose work was inspired by Naive American music and spiritual melodies during his time in America. 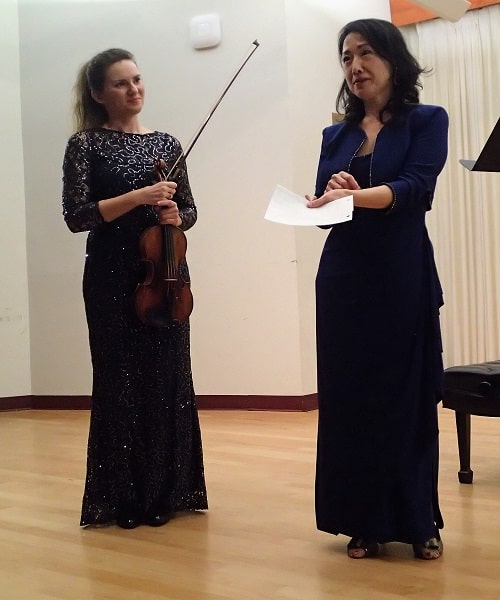 Dvorak himself was very in tune with nature and often drew inspiration from it. One time, while he was taking a walk in the woods, he was so inspired to write his next piece that he jotted down the movement on his shirt sleeve, Ohnunki Andrews.

The other two pieces that evening included “Romance For Violin and Piano” by Ellen Taaffe Zwilich, a Florida native who become the first woman to receive a Pulitzer Prize in Music for a composition in 1983, and the overture to “Fiddler on the Roof”, as composed by Jerry Brock and arranged by John Williams for the theatrical film adaptation.

When asked what their favorite piece was that evening, neither musician could name only one. All four were selected by them because they each enjoyed each and every one.

“I think we enjoyed everything, every piece in their own way, they are pieces that we both really like,” Bergeron-Langlois said. “The power of music, it warms…and the goodness of human beings.”

She received her Bachelor’s and Master’s at The New England Conservatory of Music. Since then, she has won multiple musical concerto competitions and performed in and even conducted many orchestras. She has performed on every continent except Africa and Antarctica.

Currently, she serves as the Concert Master of the Orlando Philharmonic Orchestra, where she works alongside her friend, Ohnunki Andrews. She also teaches violin, violin performance, and chamber ensemble at FSC.

Her duo partner and friend, Ohnunki Andrews, was Born in Tokyo, Japan, where she learned to play violin at Toho Gauken School of Music.

She would later earn her Artist Diploma and Master of Music in Piano Performance at Indiana University, where she also received a performer certificate for outstanding performance of a master degree recital.

She currently plays within the Orlando Philharmonic Orchestra alongside her friend, and for the past 18 years has taught at Rollins College and Rollins Community School of Music.

Their performance on Wednesday evening served as the finale for the Festival Of Fine Arts at FSC, which has been sponsored in part by the State of Florida through the Florida Department of State, Division of Cultural Affairs, and the Florida Council on Arts and Culture. 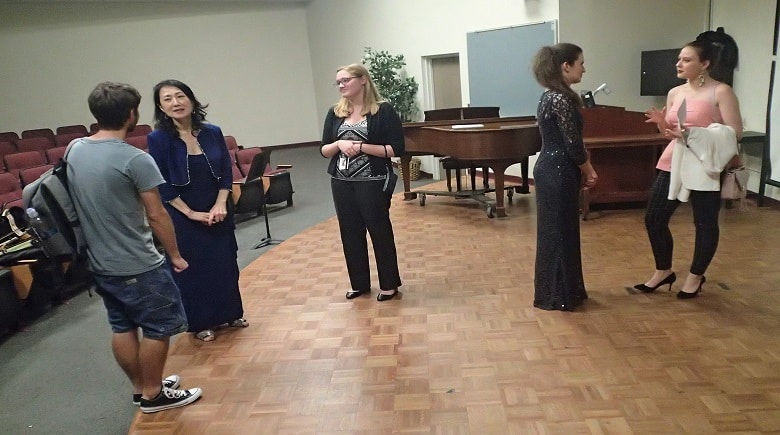