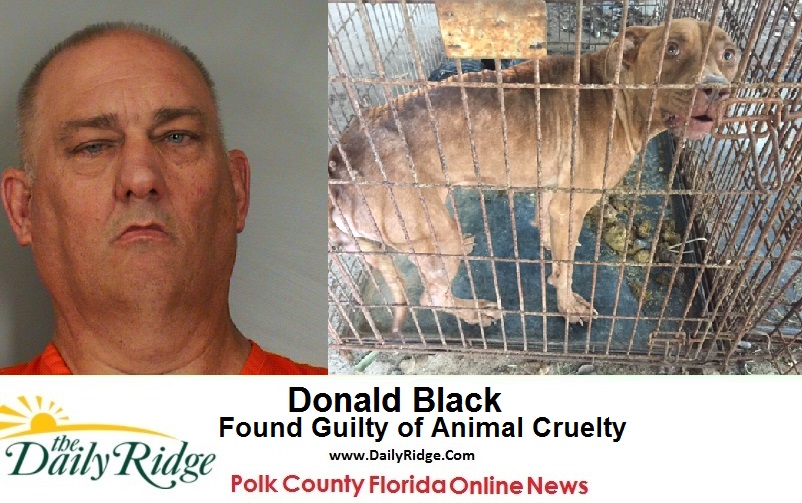 Donald Black left his dogs in cages outside for multiple weeks without food or water.

When animal control located the dogs on Oct. 25, 2017, all five were in poor health and two were severely malnourished and underweight. Of the two dogs that were severely emaciated, veterinarians determined that one dog’s condition was so severe it needed to be euthanized.

Jurors deliberated for 90 minutes and found Black guilty Feb. 27 of aggravated animal cruelty and animal abandonment. He is facing up to five years in prison and will be sentenced on April 26.

Assistant State Attorney Ian MacAlister told jurors that it was an anonymous caller who first noticed the dogs were left outside in cages and reported it to law enforcement. They appeared to have been left there for a number of weeks.

Polk County Sheriff’s Office deputies found four dogs locked in cages and covered in their own filth while the fifth dog, Bella, was lying on the ground next to the other dogs because she was unable to stand.

Bella weighed in at 21.7 pounds and tested positive for multiple parasite infestations. She also had an open sore on her hip from constant contact with the ground, as her legs were too weak to stand and she had been dragging herself across the yard.

Veterinarians determined that Bella’s severe condition was a result of neglect and decided she needed to be euthanized due to the extensive injuries she’d sustained.

Deputies determined Black was the dogs’ owner and took him into custody because his failure to care for the animals “resulted in the excessive and repeated infliction of unnecessary pain and suffering,” according to the arrest affidavit.

At trial, the defense argued that the dogs were not Black’s and that they had been left there by someone else.

But MacAlister told the jury that Black was the only listed resident at the address where the animals were found.

“The evidence showed that he was the resident,” MacAlister said. “He had a responsibility to take care of those dogs that he failed to live up to.”