Lake Wales K9 Unit Takes A Bite Out Of Crime

Lake Wales K9 Unit Takes A Bite Out Of Crime

A little old lady pushing a baby carriage takes a stroll outdoors, minding her own business, when she’s accosted by a robber. She screams in terror as her assailant snatches her purse and makes a mad dash. 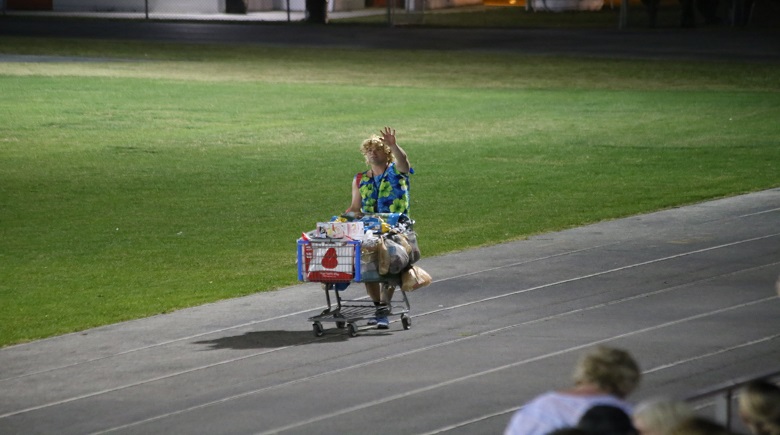 The thief almost gets away until suddenly, from out of the baby buggy, leaps a German Shepherd. The dog, which had been hiding inside the buggy, covered up in blankets, chases after the thief before sinking his teeth into him and stopping him dead in his tracks. 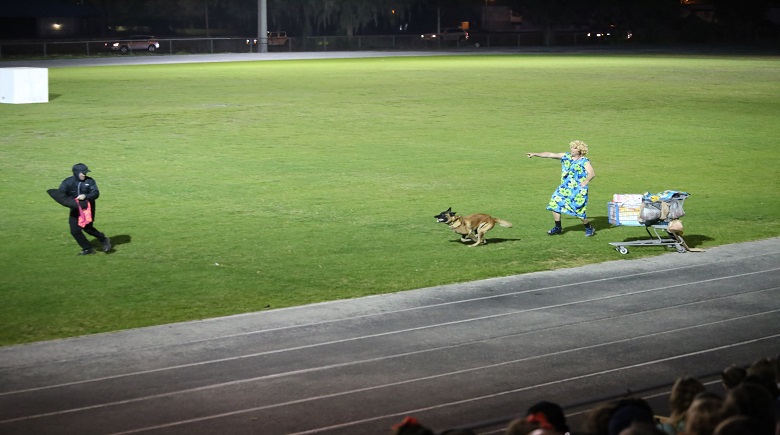 This may sound like a melodramatic scenario from a comic book or television show. In actuality, it was a demonstration hosted by the Lake Wales Police Department. The thief and old woman were both police officers, and the dog was part of their K9 unit. 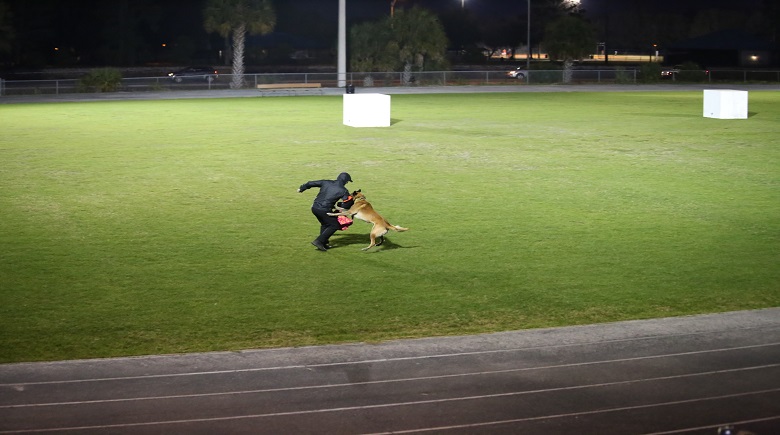 Dale Hampton played the old lady within this scenario. He serves as a canine handler for the department’s K9 unit, which regularly hosts demonstrations such as this. He loves dogs. He also loves being a police officer. So for him, being able to work as a handler on the canine unit is a dream job for him.

Both he and his dogs work hard to ensure that their city remains safe from drug traffickers and criminals on the loose. In the end, there’s nothing more rewarding that ending a day with a job well done. 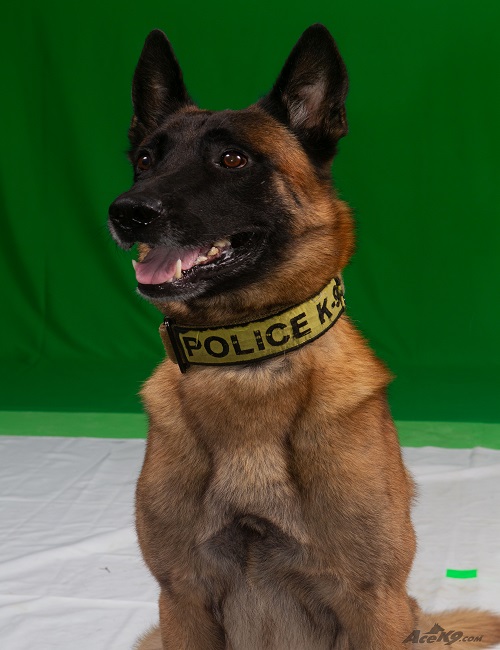 Hampton has served as a canine handler at the Lake Wales Police Department for 13 years, having served overall at the department for 15 years. When not working at the station, he enjoys spending time with family, flying, and scuba diving. 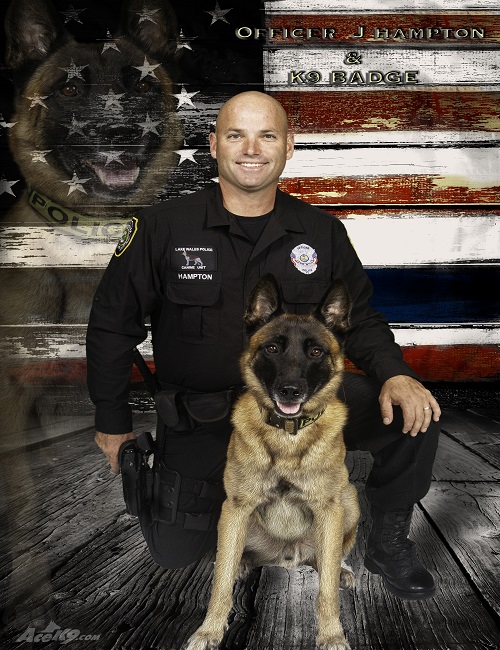 Their K9 unit consists of two Belgian Malinois and two German Shepherds. All four dogs are dual-certified, which means that they work within their patrol shifts as well as their special prime unit, where they help with search warrants and narcotic detection.

Ever since he was a little child, Hampton always dreamed of becoming a police officer. He had a chance to do that when, after graduating from high school and serving within the Marines, he attended police academy.

After graduating the academy, he had the decision to either work in Lake Wales or Lakeland. Even though he lived within the latter city, he decided to work in the former city’s police department due to its overall community feel, he said.

His first job at the department was as a patrol officer, working the routine police officer duty of answering calls, writing tickets, and making arrests. When a position opened up within the K9 Unit, he applied for it right away and has been serving as a handler ever since.

Being a canine handler requires the upmost qualifications, including an average or better score on the annual employee review, no disciplinary history, zero excessive use of force complaints, and overall being self-motivated and self-supervised.

Handling a canine also requires the upmost standards. The dogs are imported from Germany and Czechoslovakia, often at the young age of 9 or 12 months old. Each dog undergoes 800 hours of training through an FDLE (Florida Department of Law Enforcement) school course. This training includes 20 hours of narcotic detection, 200 hours of tracking, and 400 hours of criminal apprehension, evidence locating, and overall obedience and agility.

Once the dog is trained and certified, they continue receiving 22 hours of training a month to keep them at their peak level. This often required Hampton training the dogs every other week, usually on a Tuesday, for 11 hours.

The most common task for these dogs is detecting narcotics. As Lake Wales is in the heart of Florida within the intersection of Highways 60 and 27, it’s common for drug traffickers to pass through the city limits. The second most common task would be for suspect detection, often with the goal of tracking a criminal.

More often than not, their dogs are used to track down a missing child or elderly person with special needs. Being able to find a lost child separated from their parents or a dementia patient who has gone wandering away from a retirement community proves to be the more satisfying aspect of his job, Hampton said.

The department itself has received many trophies and awards, mostly through their certification from the United States Police Canine Association (USPCA). But the biggest reward of all will always be helping a lost person become reunited with their loved ones, Hampton said.

Keeping these dogs in pristine condition and properly trained proves to be quite the challenge. The biggest challenge, though, is training them to go from a vicious attack dog one moment and a tranquil pet the very next, Hampton said.

Often, it’s common for their dogs to go from apprehending a suspect with their bare teeth earlier in the day to attending a demonstration in front of a crowd of young children eager to pet him later that same day, so it’s important for the dogs to know how to act properly within each situation, Hampton said.

“The hardest part is teaching a dog to bite somebody, and at the same time, having them be social and not bite without command,” he said. “I find that to be the hardest part…so we need to have that level of switch and training where the dog knows it only bites on handler protection and demand.”

So specially trained are these dogs that they can change from an attack dog one moment to a lovable pet the very next. This aspect proves to be the favorite of many officers on the force. 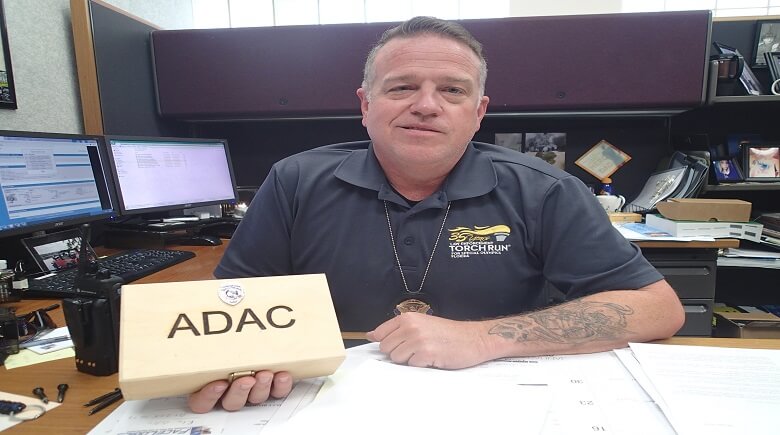 One such officer, Griffin Crosby, who has been working at the department for 23 years, currently serves as a support services commander, but had previously served as a canine handler for 10 years.

He was one of the very first officers to serve as a handler when the department obtained their first dogs for their unit back in 1997. During his time as a handler, he trained three different dogs.

One such dog, Rico, he became so attached to that he retired and kept for himself. When the dog served on the force, he was used for detecting narcotics. Together, he and Crosby helped track down many traffickers and take dangerous narcotics off the streets, Crosby said.

“We had a lot of drug arrests,” he said. “That was always my highlight, I loved taking drugs off the street, and he was phenomenal detector dog at that.”

Rico had since passed away, but Crosby keeps his cremated remains next to his desk within a box, which also contains one of the canine’s teeth. Crosby now serves his current position as a commander, but misses being able to work with the dogs. Often, he would take some of them home to his home.

“All three of those dogs were like pets in my house. There was never any problems, they were very social animals, barely ever barked, and I had no issues of them at home,” he said. “The ones I had were phenomenal dogs. I miss having that at the house. I’m single. I live at home. It would be nice to have a dog. That is the only thing I really miss. The companionship of having a dog.”