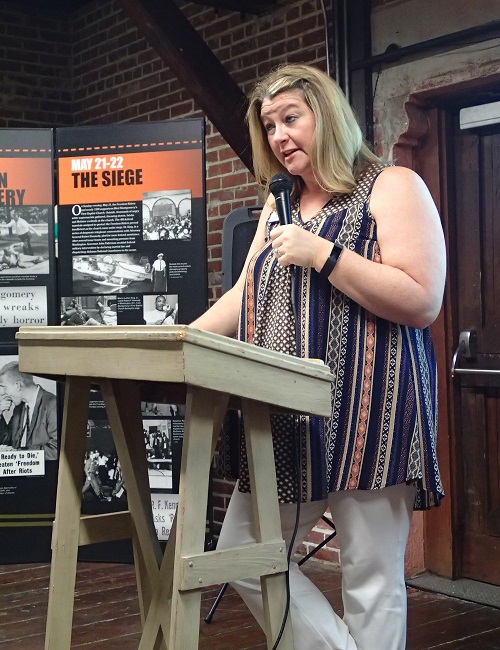 On Feb. 13, 1909, nearly 110 years ago, a young black man named Jack Wade was accused of attempting to assault a young white woman. Like most black men accused during that time, he was lynched for his “crime” by being hung from a tree near Bartow.

While such a horrific account of explicit racism would upset most modern sensibilities today, that lynching was celebrated back then by many people as a glorious act of justice.

In the Tampa Tribune, a reporter described the aftermath of the lynching thusly: “Almost like the lifting of a fog when the morning sun bursts forth was the change in spirit of the city today after vengeance had been claimed and justice meted out to the [black man]…Once more the honor of Southern womanhood had been protected and a life had paid the penalty of transgression.”

This account of lynching in Polk County was one of many horrific tales about racial violence shared during a historical lecture at the Lake Wales Museum & Cultural Center on Thursday evening. 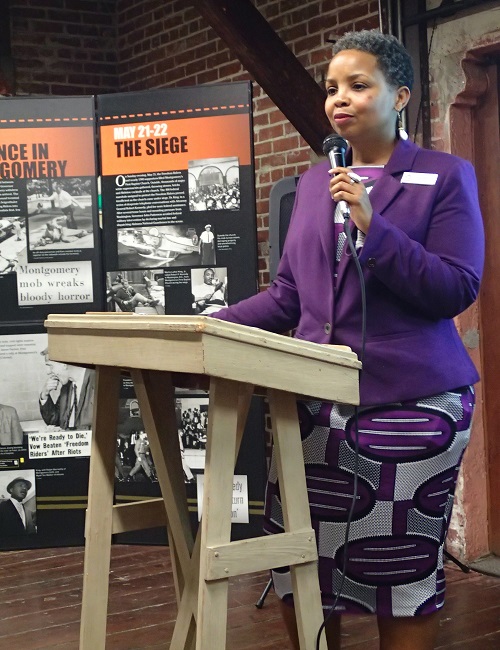 Using research she conducted for her book, “Democracy Abroad, Lynching at Home: Racial Violence in Florida”, she shared the stories of racial lynching that occurred in the state of Florida, the influence they had on anti-lynching policy and the civil rights movement, and the impact they continue to have today upon the black community. 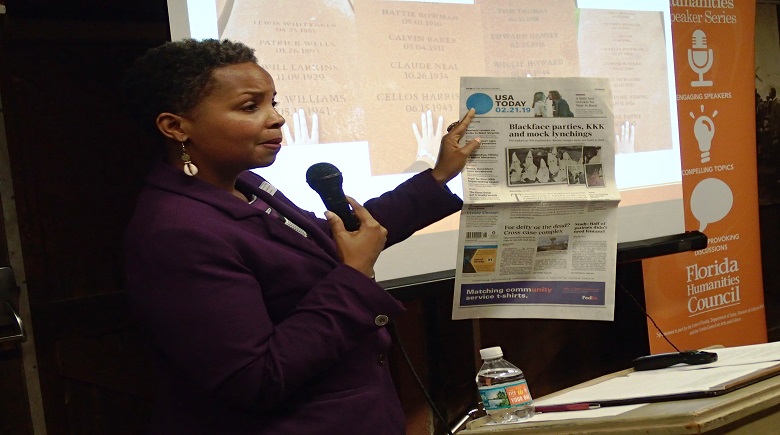 During that time, Florida had a total of 208 racial lynchings. The state itself has the highest level of lynchings per capita, making it the most deadly place for black people to live, Dr. Hobbs explained. Polk County ranked third in the total number of racial lynchings.

While compiling research on her book, Dr. Hobbs resided within a city where three notorious accounts of racial lynching had occurred nearby. One of these was that of Mary Turner, a black woman lynched in 1918.

Turner had threatened legal action following the lynching of her husband. She was accosted by a mob and taken into the woods. There she was hung, set on fire, and disemboweled. As she was nine months pregnant, her unborn fetus was torn from her body, where it fell onto the ground and its head crushed by one of the mob members.

Living within a city where such horrific acts occurred proved to be quite the harrowing experience, as the aftermath of these violent racial acts still permeate the black community to this day, she said.

All throughout the state, such acts were commited against its black inhabitants, from the massacre of Ocoee in 1920, where the KKK targeted black people exercising their right to vote in an election, to the lynching of Ruben Stacey, a man lynched in Fort Lauderdale in 1935 for the “crime” of asking a white woman for a glass of water.

Such acts of racial violence were common during the early 20th Century, and inspired more than 200 anti-lynching bills that were introduced to Congress, according to Wikipedia. Only as of last year was lynching made a federal crime through The Justice for Victims of Lynching Act, passed on Dec. 19, 2018.

The Past Affect The Present

While many people, mostly white, would assume that America had become a “post-racial” society following the Civil Rights movement, racism still permeates American society today; and though racial lynchings no longer occur as often as they once did, violence towards black Americans still continues to this day, Dr. Hobbs explained.

Hate crimes alone have increased significantly within the past three years, with reports increasing by 17 percent; of these reported hate crimes, “nearly three out of five were motivated by race and ethnicity”, as reported by The New York Times.

Police brutality proves to be yet another form of violence that disproportionately affects black people. As Vox reports, “Black people accounted for 31 percent of police killing victims in 2012, even though they made up just 13 percent of the US population.”

With the rise of hate crimes and police brutality, lynching of black people continue to this day, though the form of the racial violence against them has since changed form, Dr. Hobbs explained.

“There are so many elements that are similar to what we saw happening before, the only thing that has changed is that the actors are state-sponsored in our law enforcement,” she said. “The method that is still very much the same is that we don’t care what happens to black people, that the death of black people in America is no man’s concern.”

Most of this violence continues to this day due to anti-black stigma, or the unfair assumptions made about black people. This stigma is often peddled through stereotypes such as blackface. While such stereotyping is often considered “a thing of the past”, the revelation of many recent examples prove that they are ugly relics that remain alive and well, Dr. Hobbs explained.

During her lecture, she held up a print copy of USA Today, with the cover story, “Blackface, KKK hoods and mock lynchings.” The article reviewed more than 900 yearbooks which featured examples of black stereotyping. The most notable of these examples was that of Virginia Govenor Ralph Northam, a yearbook photo of which was recently uncovered of him wearing blackface.

“This othering of black people is something that is still very much with us, and until we begin to have those very difficult conversations, we will continue to perpetuate it,” Dr. Hobbs said. 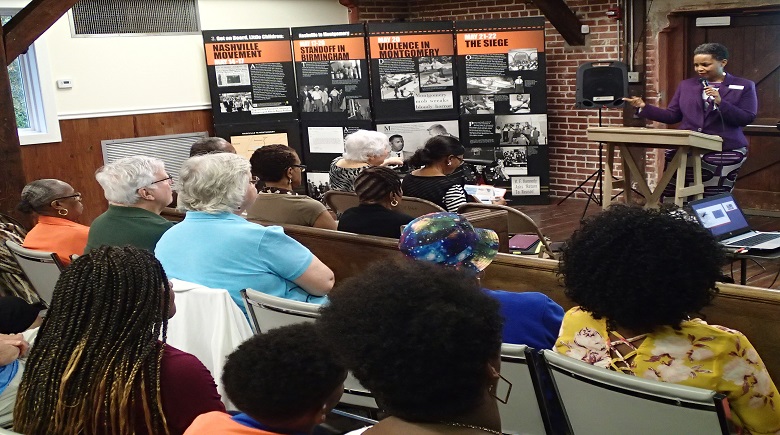 More than 60 people attended the lecture that evening, which elicited much lively discussion. One black woman within the audience told her own story about the effect of racial violence upon her family. Growing up, her older brother mentioned he had a crush on a white girl. Their mother chided him, telling him that if other people found out, he would be hung from a tree, she said.

She was too young to know about the Ku Klux Klan and lynching, so understanding the history behind them, especially through a lecture such as this, made her mother’s word feel even more chilling in hindsight, she said.

Jennifer D’Hollander, director of the Lake Wales Museum, was quite impressed by the turnout that evening. She credited the success to the grant the museum had received from the Florida Humanities Council, which allows them to host programs such as this.

She was especially moved by Dr. Hobbs call to provide better education on black history, as it is a subject not properly taught in public schools. When it comes to black history, Dr. Hobbs said, most students only learn nine words: “Martin Luther King. Rosa Park. ‘I have a dream.’”

D’Hollander hopes that this evening’s event helped contribute to the further education of black history, and she expects her museum to provide more opportunities such as this within the near future.

“I think this [lynching] is a very difficult subject, but I am glad we were able to bring Dr. Tameka Hobbs here to actually talk about this because only in talking about it can we learn about it, can we learn it,” she said. “If we don’t talk about difficult things from our history, then we will never learn from them.”

The museum is currently hosting “Freedom Riders”, an exhibit on black history concerning the “Freedom Riders” and their protest of racial segregation. The exhibit will be at the museum until Mar. 20.

The Lake Wales Museum is open free to the public from 9 a.m. to 5 p.m. (closed on Sunday and Monday), and located at 325 S Scenic Hwy, Lake Wales, FL 33853. For more information, visit their website at: http://www.cityoflakewales.com/439/Lake-Wales-Museum