FSC Lecture Tells How Florida Was Almost Taken Over By Privateers

FSC Lecture Tells How Florida Was Almost Taken Over By Privateers

Did you know that Florida was nearly taken over by a Scot and Mexican in an effort to help the Spanish colonies win their independence? Like most bizarre tales, fact proves stranger than fiction.

This little tidbit of Florida history was divulged by a University of Central Florida (UCF) professor and historian during a lecture at Florida Southern College (FSC) on Thursday evening. 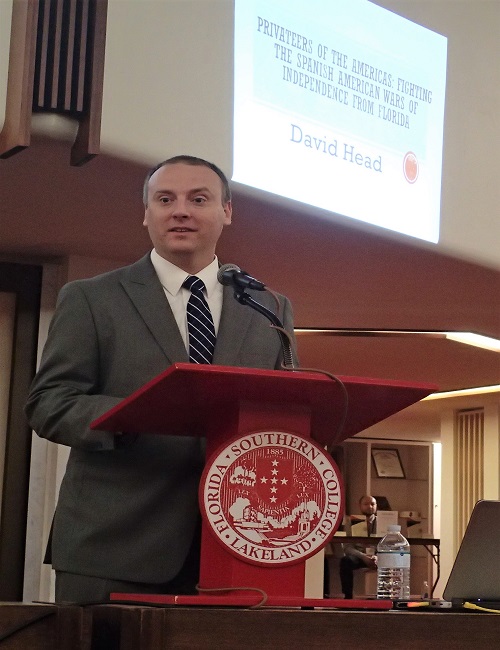 David Head, a specialist in early American maritime history at UCF, entertained more than 100 attendees within the FSC Hollis Room as he offered a history lesson from his book, “Privateers of the Americas: Fighting The Spanish American Wars of Independence from Florida.”

The Spanish-American Wars For Independence

Following the overthrow of the King of Spain by Napoleon Bonaparte in 1808, the Spanish colonies used this opportunity to seek their independence through the Spanish-American Wars for Independence.

These colonies commissioned privateers, or privately-owned warships, to intercept and capture enemy ships. The privateers would hand the captured ships over to the officials who commissioned them, while the privateers themselves would keep anything else they captured, Head explained.

During this war, the Spanish colonies took a keen interest in capturing Florida, which was then owned by the British and divided into two territories: East and West. As Florida rested near the Caribbean and Cuba, it served as the ideal location to intercept enemy ships.

The Invasion of Amelia Island

Amelia Island, which lay between Georgia and Florida, was initially invaded by a British-Scottish general named Gregor McGregor. He had previously served within the British army before eventually leaving for South America, where he became a general in Venezuela.

McGregor, who insisted on being called “Sir General McGregor, decided to lead his own expedition to attack Florida. His plan was to conquer Amelia Island and use it as a base of operation, then to push onward to the mainland to conquer St. Augustine and rest of Florida, Head said.

In 1817, McGregor successfully conquered the island and pushed away its 100 Spanish defenders. He declared the island “La Republica de Las Floridas” (“Republic of the Floridas”), and even designed its own flag and commemorative medal, the latter of which contained the inscription, “Amalia, Veni, Vidi, Vici, Libertas Floradarium duce Mac Gregorio.” (“I came, I saw, I conquered, Liberty in Florida under McGregor.”) Evidently, McGregor prided himself as a Caesar figure, Head said.

McGregor Steps Down, Aury Steps In

Only two months after conquering the island and using it as a base of operations to pull off raids along the mainland, McGregor would abandon his scheme to conquer Florida and retreated from the island, leaving it in chaos and disarray.

Amidst this chaos arrived a young 20-something privateer named Louis Michael Aury, who arrived on the island a few days after McGregor abandoned it, declaring himself “Chief of the Mexican Republic”, Head said.

Aury would go onto succeed where McGregor failed. Under his leadership, he would smuggle more than $500,000 of prized goods and 600 to 900 slaves to help aid in their efforts to potentially invade Florida for the Spanish colonies. He even planned to create an official government and draft a constitution.

At that time, the United States was a neutral party during the Spanish-American War for Independence. However, with the situation on Amelia Island violating American law and posing a national security threat, the Monroe administration would address it as their first foreign policy crisis.

The U.S. Navy lands on the island with superior forces and inevitably drives out Aury and his men. Amelia Island is then claimed for America, with Florida eventually being claimed and made an official state several years later.

So had the U.S. not intervened, would McGregor and Aury have succeeded in their plans to invade Florida? That would have been theoretically possible. How much control they would have had over the territory was another question, Head explained.

With enough man and naval power, their forces could have invaded St. Augustine, which was then the capital of East Florida, but they would not have remained in power very long, as America would have inevitably stepped in to take over, Head said.

“America wanted Florida,” he said. “It was a high priority for policy at the time…The U.S. would have found a way to acquire Florida one way or another.”

This lecture was the fifth within this year’s Lecture Series presented by FSC. This month’s lecture drew in nearly a hundred guests, which was surprising considering other events occurring at the college, explained James M. Denham, FSC history professor. 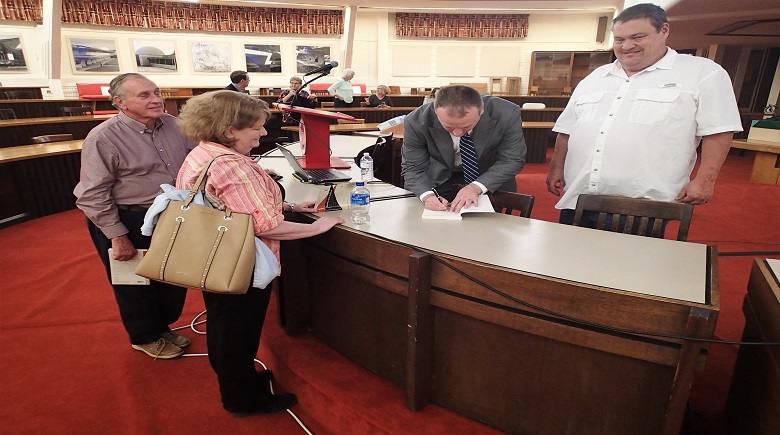 “I think we did not have many people this time as we did last month, but we had a good turnout,” he said.

For Head, this was his first time hosting such a lecture at the college, as well as visiting the college himself. He was most impressed by the discussion and questions that his lecture elicited afterwards, he said.

“It is wonderful [lecture] series that they have here, such a vibrant intellectual life between the college and the larger community,” he said. “Everyone has been a wonderful host here, they came out here, [and] they were very enthusiastic.” 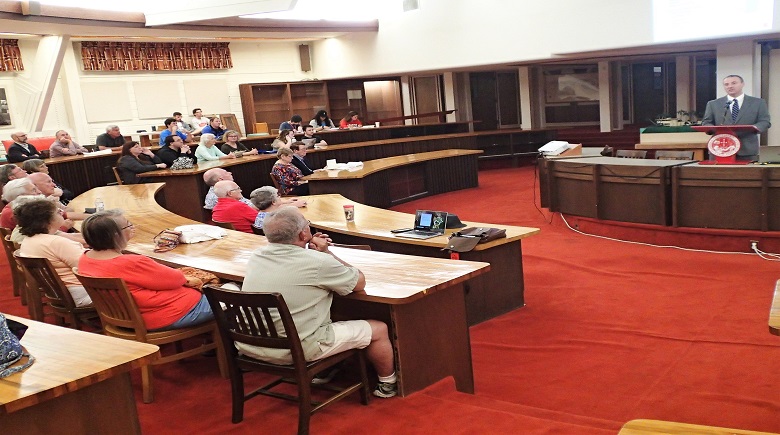