The Lakeland Chamber of Commerce has accomplished great strides to make Lakeland a better place, and they hope to continue their journey moving forward to make it even better. This forward-thinking vision served as the central theme of the Chamber’s annual meeting, hosted Tuesday evening at the RP Funding Center. The evening started with appetizers and cocktails catered by local eateries and served within the exhibit hall right across from the Youkey Theather. The attendees then entered the theater for the evening’s main presentation, which opened with an invocation by Rev. David McEntire, senior pastor of First United Methodist Church, and the singing of the National Anthem by Elizabeth Burton, graduate of Harrison School of the Arts. 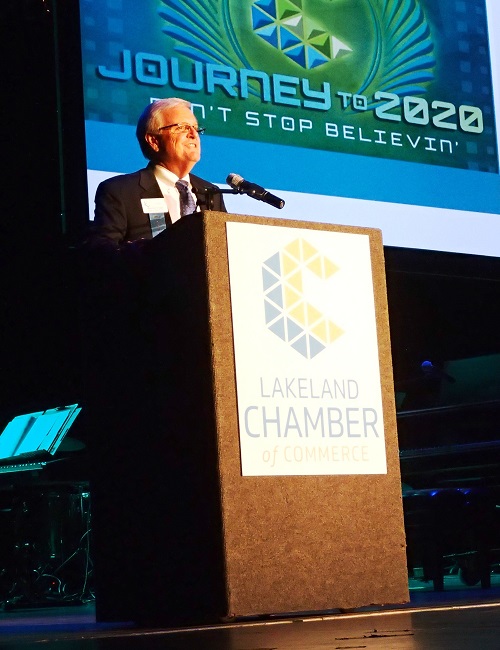 Weymon Snuggs, the former Chamber board chair for 2018, offered a few highlights of what the Chamber had accomplished within the past and what they hoped to accomplish within the coming years.

“We have embarked on this transformation journey, the theme of this meeting tonight, to ensure that we deliver the resources and services that will create growth and success to those that we serve,” he said.

Their main priority had been the creation of a business resource center, a facility which will be utilized to help assist small businesses and help solve their many challenges that they face on a regular basis.

This facility will utilize resources and services provided through partnerships with various local and state organizations, including the National Entrepreneur Center in Orlando and the Florida High Tech Corridor Council.

Within the past year, the Chamber has also transformed its Chamber Foundation from a private entity to a public one, initiated discussion with government officials on helping provide affordable health insurance to small businesses, and embark on their Chamber accredidation process.

The Chamber was first accredited in 1968, and had achieved its second five-star rating in 2014. Of the 7,000 chambers throughout the country, Lakeland’s is one out of only 120 with such a high rating, Snuggs said.

“I believe the reason this Chamber has been consistently recognized over the years for its excellence is because of the outstanding support we have had for this community and all the great leaders that had the passion to make sure it has been successful,” Snuggs said. “We all know there is no better place to live, work, and raise a family, so when you think about it, a five-star Chamber and a five star community…makes all the sense in the world.” 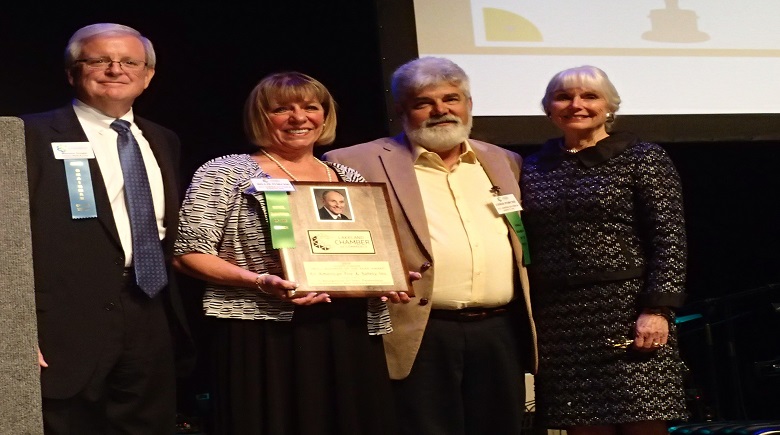 The Scott Linder Small Business of the Year Award was presented this year to All American Fire and Safety, Inc., a local fire safety company that provides fire extinguishers and other fire suppression equipment and systems.

Not only is the company dedicated to keeping the local community and surrounding area safe from fire, it has also been involved with local organizations, events, and programs, even assisting many businesses following the aftermath of Hurricane Irma in 2017.

“[Theirs is] an established company philosophy of putting customers first,” said Martha Linder, who presented the award that evening to owners Chris and Billie Porsche. “[They] don’t believe in following standard, rather, [they] strive to set the standard of excellence in our community.” The George Jenkins Award was presented to Gow Fields, who had served more than 21 years on the Lakeland City Commission. He was first elected in 1992, and consistently re-elected ever since. In 2010, he was sworn in as the City Mayor, which he faithfully served as until 2014.

A Lakeland native considered to be a “titan of the community” through his expertise and public policy, his accomplishments have allowed him to be inducted into the Hall of Fame for both Polk County Public Schools and Kathleen High School.

“I am supremely humbled,” he said, receiving his award from Ed Crenshaw, Chairman of the Board. “Thank you very much to the Chamber and this community for allowing me to be able to serve and try to make a small difference in very important ways. It certainly has been a journey, one that I have found very enjoyable, and it has been a pleasure to give back in the spirit of Mr. Jenkins.”

The Chamber then initiated the passing of the gavel from its past board chairs to this year’s chair, Michelle Ledford. With more than 25 years in advertising, she has been recognized for her advertising expertise, including receiving a Silver Medal Award in Advertising. Ledford was conferred the gavel from the past chamber chairs, and she, in turn, gave a portrait of last year’s chamber chair to Snuggs himself. The event came to a climatic conclusion with several performances from local schools. The big finale involved several choruses from Florida Southern College, Harrison School of the Arts, and Southeastern University singing a unique rendition to Chicago’s “Don’t Stop Believin'” “Working hard to reach our goal, the Lakeland Chamber’s on a roll, Doing anything to make us thrive just one more time. We all win when we choose to join together and share the news. Oh, the journey never ends, it just goes on and on and on,” the students sang. 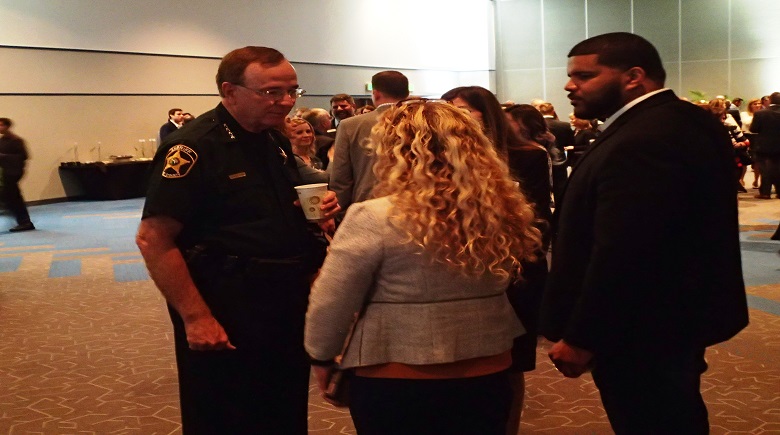 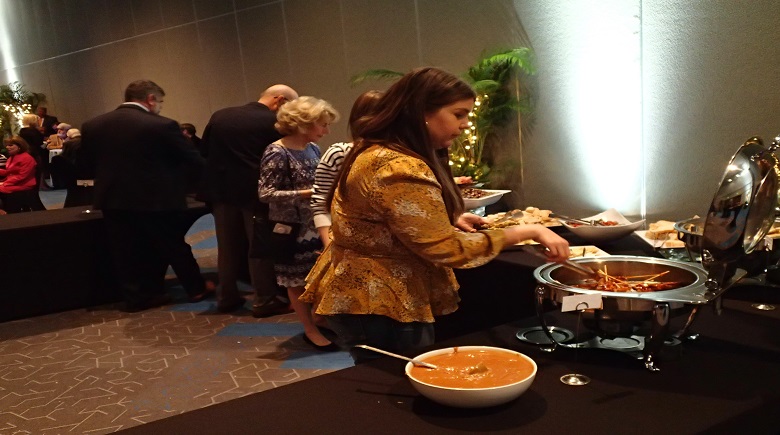