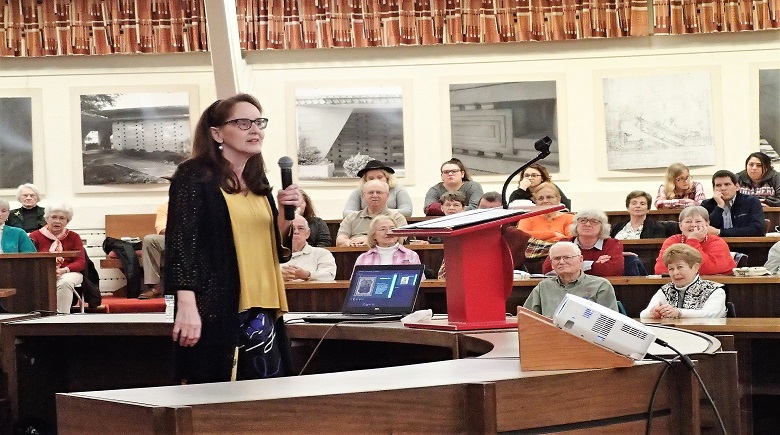 Florida was the third state to secede from the Union, but when it comes to the “War Between The States”, the state is often treated as “The Rodney Dangerfield of the Civil War”—it gets no respect! 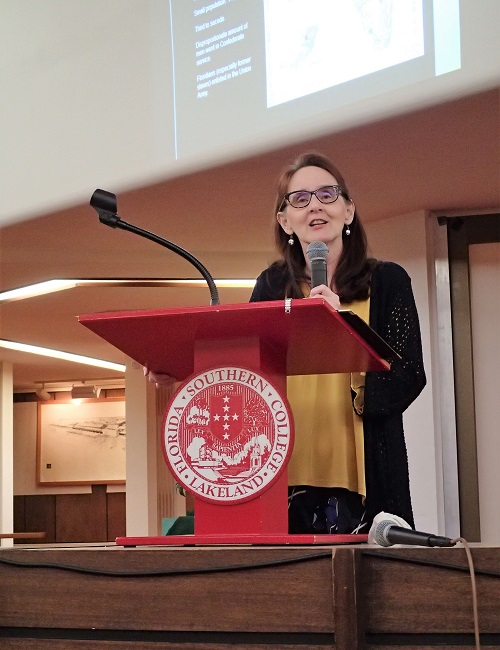 Dr. Tracey J. Revels, historian and associate professor of history at Wofford College, decided to give the state its due respect by reading through hundreds of old letters, diaries, and other historic documents to uncover the long forgotten stories of Florida during the Civil War.

She had since published her findings within her book, “Florida’s Civil War: Terrible Sacrifices”. She shared many of these stories that she discovered during a lecture at Florida Southern College (FSC) on Thursday evening.

FSC had invited her to participate within one of its lectures for its 2018-2019 FL Lecture Series. The event managed to fill nearly every seat within the college’s Hollis Room, making it quite the impressive turnout.

Dr. Revels herself had visited the college three times to host such lectures, and this one, by far, was the largest turnout she ever experienced there, she said.

James Denham, FSC proffesor of history, and a former classmate of Dr. Revels, was likewise pleased by the turnout, as well as with Dr. Revels’ presentation into the experiences of Florida families during the Civil War.

“It was a very, very frightful struggle,” he said. “Even though Florida did not have a lot of the large huge battles like Gettysburg or Vicksburg, it still had its own experience, which was a little bit different.”

The crowd that evening listened intently as Dr. Revels shared the stories she had discovered about how Florida families experienced the war from various perspectives, showcasing how the war was more than simply large-scale battles.

At the time, the state population was more than 140,000, according to the census of 1860—”That is the size of Gainesville when the Gators are in the swamp,” Dr. Revels said.—yet the state offered a disproportionate turnout for the war, with more than 14,000 Floridians fighting for the Confederacy and 1,000 for the Union.

As such, every family in Florida, whether they supported the Confederacy or not, whether they were free men or slaves, were impacted by the war one way or the other, and their experiences helped share the state’s history, Dr. Revels explained.

“I want people to take away the idea that the Civil War was more than just battles and marches,” she said. “It was a war at home and it is a social story as well as a military story.”

Through her book and her lecture, Dr. Revels divided the different families during the war into three categories: Confederate, slave, and Unionist/divided/disillusioned. 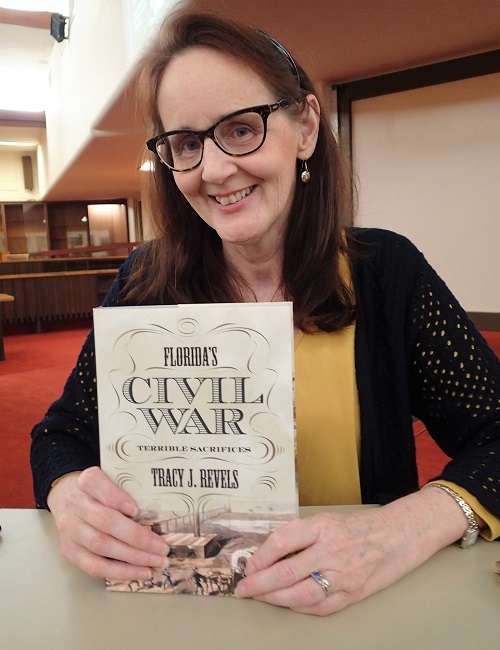 Nearly one third of white Floridians owned slaves, and despite vigorous debate, many supported the Confederacy. As such, many men were more than willing to enlist in the war against the Union.

Even those who weren’t as sympathetic to the Confederate yearned to fight within the war. Dr. Revels mentioned how one 17-year-old decided to join because he couldn’t keep his mind focused on his studies while the war was going on.

As most of the men went off to war, they left behind their women to pick up on the work they left behind, from plowing fields to creating ammunition. One woman during that time wrote that that it was easier to note what women didn’t do rather than what they did do.

Women back home would receive letters from their husbands on the battlefield, and the men would likewise receive correspondence from home. Often they would talk of family matters, while others would express their longing for marital intimacy, albeit in euphemistic language.

One such man, Winston Stevens, referred to such intimacy as “taking morphine.” As such, he wrote in one letter how many women had visited the camp, and how he wished to take “morphine” but refused because he had plenty for him waiting at home.

“Historians are people who love to read dead people’s mail.” Dr. Revels said. “That is why I love these letters…these people become real when you read their letters.”

While many men described the war in high and lofty terms within their letters, near the end of the war, more and more of these letters, as Revels discovered, started describing the war with one particular word, “wicked.”

“These men realized how good they had it at home and how much they missed it,” Dr. Revels said.

Slave Families: Freedom As Close As A River

Little is known about the personal experiences of slave families, as slaves were often not only uneducated and illiterate but forbidden from receiving an education. As such, they were unable to document their experiences in letters or diaries. What little we know often come from second-hand accounts and guesswork.

For example, one elderly couple who were dating at the time each had their own slave. The man owned a male valet. The woman owned a female maid. Both slaves were assumed to be courting along with their masters.

During the war, relationships were tenuous, as marriages were not legal and separations were common. Black wives often saw their husbands and even children enlist. One slave named Jake had enrolled in the Union forces at Duvall County. After the war, he tried to find his wife, only to discover that his master, in retaliation, sold her.

Many families sought their freedom by escaping. In East Florida, the old saying was that “freedom is as close as a river”, yet for many families, such freedom was as close as it was far away.

One slave named Robert had fled to the battle lines in Pensacola with his family along the Escambia River. He had brought along his wife, but when asked why she wasn’t with him, he replied, “the dogs done catched her.”

If you think the nation feels divided now between Trump supporters and the #NotMyPresident “Resistance”, be grateful you did not live in Florida during the Civil War. The division between Confederates and Unionists were just as heated.

While most of the state supported the Confederacy, many others supported the Union. Unionism was especially strong in Key West, Pensacola, and Jacksonville. These places were nicknamed “Yankee Florida.”

Living as a dissident within a state in support of the war proved not only controversial, but life threatening. Many Union sympathizers had to keep an eye on their neighbors to ensure their own safety. One woman and her children in West Florida were brutally killed with dogs involved for their dissent.

One married couple in Apalachicola could not agree on succession. The wife supported it, while the husband did not. When the war started, they decided the only way to save their marriage was to undergo a temporary separation until the war ended.

When the war did end, they eventually reunited and remained married. When asked how he could go through with it, the husband replied to a reporter: “Did I miss her? Yes. But my young man, those were very stirring years.”

Florida was eventually seized by the Union during the war, and the state re-entered the union after the war. However, unlike other Confederate states, Florida was the only one not to have their capital captured by the Union, Revels said.

Of the 14,000 Floridians who went off to war, one third never returned, while one third returned with serious injuries and another one third returned “okay”—though considering modern medical research on the effects of war, Revels remains skeptical about that.

“A third came home okay,” she said. “I would question that. You may have come home with your body intact, but what did you leave behind?”

“I believe Floridians were very strong people at the end of the war,” she said. “When I think of the Civil War, I think of lots of different families, but in my mind, pretty much all of them are tough people. In the end, the world had changed, for better or worse, for richer or poorer, but still what mattered most of all was your family.”