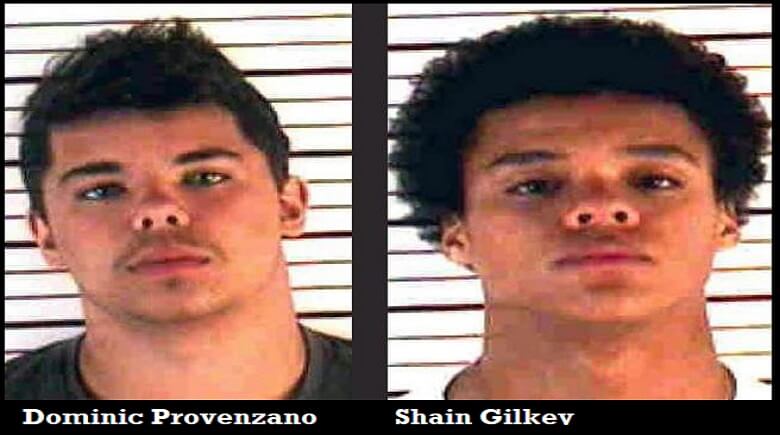 The investigation began Monday morning after the overnight burglaries were reported on Spoonbill Court and Dovehollow Drive. Deputies then learned that a 2016 Dodge Charger was also stolen. Each of the vehicles had been left unlocked, and several items were stolen from within.

Security video from the area was obtained which revealed two suspects, one wearing a tie-dyed hoodie and the other wearing a red hoodie.

Deputies located the parked Charger at the Highlands Apartments at 4211 Hancock Avenue in Lakeland, and watched as Provenzano walked toward the car, removed a key fob from his shorts, and unlocked the car with the fob.
Deputies quickly moved in, and detained Provenzano and Gilkey who were eventually arrested.

Despite having the fob in his shorts, Provenzano denied being involved, but Gilkey was cooperative and confessed that he and Provenzano were involved.
Provenzano and Gilkey were transported to the Juvenile Assessment Center in Bartow and charged with: Grand Theft Motor Vehicle (F-3), 3-Counts of Burglary of Conveyance (F-3), and 3-Counts of Petit Theft (M-2).

“These are not boys just being boys. These two are committing big boy adult crimes and need to be held accountable. Ironically, each one of the cars they got into were unlocked, but when they had possession of the stolen car, they kept it locked when they weren’t in it. Please folks, lock your cars.” – Grady Judd, Sheriff.

Dominic Provenzano’s criminal history consists of 4 Felony Charges and 4 Misdemeanor Charges, including the prior charge of Battery.